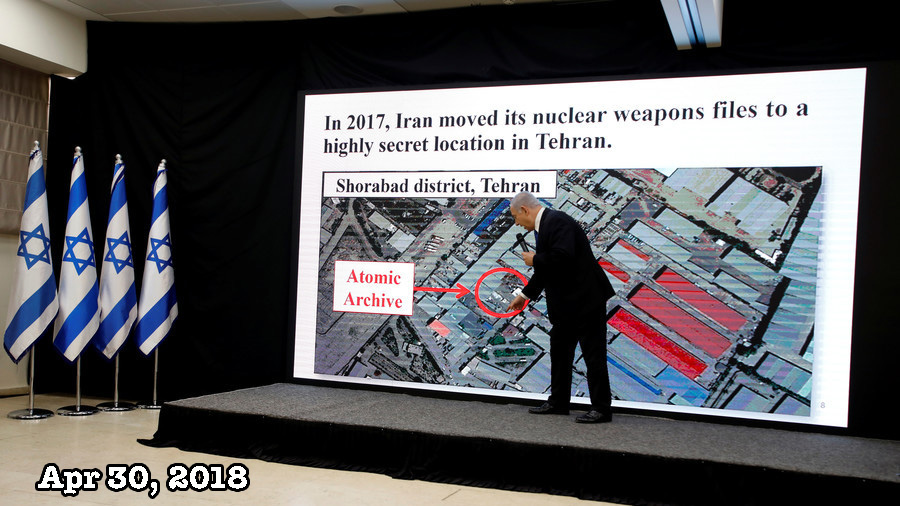 Have you ever seen any head of state give a speech in which he used slides and props like a computer salesman?

I have not. The closest any politician came to it in my experience was Ross Perot. The former head of the then largest computer services company in the world, used charts and graphs in his 1992 presidential campaign as if he were at an IBM board meeting to make his case against NAFTA and other globalist projects.

But Perot was not a head of state. So this evening, Israel’s prime minister Benjamin Netanyahu made history when he used slides, charts and props to make his case that Iran has lied and violated the 2015 nuclear treaty.

“After signing the nuclear deal in 2015, Iran intensified its efforts to hide its secret files,” he said. “In 2017 Iran moved its nuclear weapons files to a highly secret location in Tehran.”

Netanyahu explained that “half a ton” of documents from the secret Iranian archives were obtained by Israel in “a great intelligence achievement.” He claimed that the files contain incriminating evidence that Iran has been working to develop a nuclear bomb as part of a program called “Project Amad.”

You can watch the entire Bibi dog and pony show here which was broadcast nationally this evening out of Tel Aviv.

I watched it. By chance. I was searching for something on the web when Bibi’s speech popped up on Fox News.

When he was finished, I must say Netanyahu made a strong case against Iran. And for why Donald Trump should pull the US out of the Iran nuclear treaty on May 12. But there is always the other side of a coin.

But he offered no real explanation how “half a ton” of Iran’s most sensitive nuclear documents were snatched away by Israel from Iran’s top secret site. That sounds like something right out of a James Bond film. And as we all know, Bond was a fictional character.

For all we know, both Bibi’s slides and those document files could be mockups. In other words, fake. Just like that nuclear bomb cartoon the Israeli prime minister embarrassed himself with when he paraded it before the United Nations General Assembly in September 2012.

So before Trump wholeheartedly embraced everything Netanyahu said today as gospel truth (which the US president has already done!), he should have heeded the advice of one of his predecessors. It was Ronald Reagan who coined the phrase “trust but verify” when he negotiated with Gorbachev, the head of the Soviet Union in the 1980s.

Alas, this is 2018, And Trump’s Middle East policy can be summed up as “trust and bombast.” And bomb anyone Israel considers an enemy.

Netanyahu’s dog and pony show also brought back memories of two other historical events – one from business, another from political history.

During the half a century of the two Watson’s leadership, IBM had built up a reputation of being lily white and holier than Thou when it comes to telling the truth. The 1956 Consent Decree, in fact, compelled it to do so.

So when IBM announced its now legendary S/360 line of computers in April 1964, which changed the world of computing for ever, few people had even an inkling that some of the computer models on display were cardboard or wooden cutouts. The world had to wait 26 years for IBM to come clean.

Tom Watson Jr, the IBM CEO who made the announcement, fessed up in his 1990 autobiographical book “Father, Son & Co”

“Not all of the equipment on display was real,” Watson wrote.  “Some units were just mock-ups made of wood..”

He claimed, in an effort to exculpate himself, that IBM had disclosed that “to our guests.” But even this writer, who spent over 8 years with IBM during the mainframe hay days, and several decades following the company as an analyst, had never heard of this 1964 IBM deception until 1990. (see Mainframe at 40, Apr 2004).

NETANYAHU: SHOW US THE BEEF

So if even the pristine IBM was capable of such a ruse, why should we trust Bibi’s slides and props? After all, we know that when he said, “Iran lied; big time,” it was the pot calling the kettle black.

Which takes us back to Regan’s “trust but verify.” I did not hear Netanyahu saying that he invited Iran’s friends and allies, like Russia, Lebanon, Venezuela etc., to verify the authenticity of the “half a ton” of documents Israel supposedly stole from Iran.

Until such time that an independent body of international experts affirms that what Netanyahu said is true, we have no more reason to believe him than we did Iran when that country claimed that it had ended its nuclear weapons program.

So a wise independent observer should keep his mind open. and not be swayed by a powerful visual marketing pitch Netanyahu delivered today. As Trump was, for example.

But then, that’s how “stable geniuses” behave. They think they know everything and do not require proof. 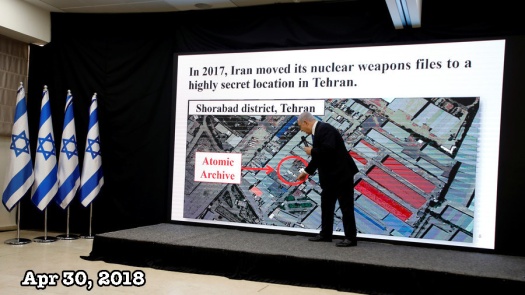 WHO’S AMERICA’S BOSS? NIKKI OR DONALD? ACTUALLY, NEITHER. IT IS BIBI.

Nikki Haley reverses Trump, says US troops are to stay in Syria

She is “a tsunami of fresh air,” Israel’s PM Netanyahu lauds Haley

The US will not pull its troops out of Syria until its goals are accomplished there, US Ambassador to the UN, Nikki Haley, has said. The US currently has over 2,000 troops in Syria and a number of contractors.

Haley added that the US wants to ensure that chemical weapons are not used in a way that is of risk to US interests, Islamic State (IS, formerly ISIS) is defeated, and Iran’s actions are monitored.“Be very clear, if we leave, when we leave, it will be because we know that everything is moving forward,” Haley added (click here for more).

Yet less than three weeks ago, Donald Trump, who is ostensibly Nikki’s boss, and the US president, said the opposite:

“We’re knocking the hell out of ISIS. We’ll be coming out of Syria like very soon. Let the other people take care of it now,” Trump said at an Ohio public event. “We are going to get back to our country, where we belong, where we want to be.” (Mar 29, 2018 – see LIKE CUBA, LIKE SYRIA?).

This was not the first time Nikki had contradicted Donald and successfully sabotaged the President’s overtures toward peace. Last July, Trump and Putin met for the first time on the sidelines of the G20 summit in Hamburg, Germany,. And it was love at first sight.

“I had a tremendous meeting yesterday with President Putin,” Trump said on July 8  while speaking with UK Prime Minister Theresa May.

It must have been. The meeting was scheduled to last 30-40 minutes. It went on for 2:16 hours. Even Melania could not pry her husband away from Putin (see https://wp.me/p3QU1S-2kr).

‘We cannot trust Russia & we won’t ever trust Russia’ – she squawked the same day in a CNN interview.

This was the Truth in Media comment the same day (July 8):

Right on cue. Now it remains to be seen who is in charge here – Trump or the NWO foreign policy masters.

If it is the former, Trump should fire Haley immediately for insubordination. It is the President, not the UN ambassador, who makes foreign policy.

And if Trump does not, then well… we’ll also have an answer as to who is in charge, won’t we?”

Less than three weeks later, we got our answer. Haley and her backers won. Trump backed down. And a new round of Russia sanctions was imposed (see Who’s whose flunkey? – Nikki Haley: Another Adherent of the Nothing Creed, Dec 2017).

And Nikki scored for again in December 2017, when Trump announced that the US would recognize Jerusalem as capital of Israel (see ANOTHER DAY WHICH WILL LIVE IN INFAMY).

What dives Nikki such power?

In early March, Netanyahu told Nikki that she was like a “tsunami of fresh air” at the UN.

“I wanted to tell you how much we appreciate the defense of Israel and the truth that the president and you bring into these cloistered halls that are so damp, you know, with anti-Israel venom,” Netanyahu said Thursday in his meeting with Haley at the United Nations in New York. “It’s not a breath of fresh air, it’s like a tsunami of fresh air.” (from Times of Israel, Mar 8, 2018).

So Haley might as well be recognized as Israel’s ambassador at the UN. And Bibi as America’s real boss. Because the president we currently have at the White House is cow-towing to both of them. 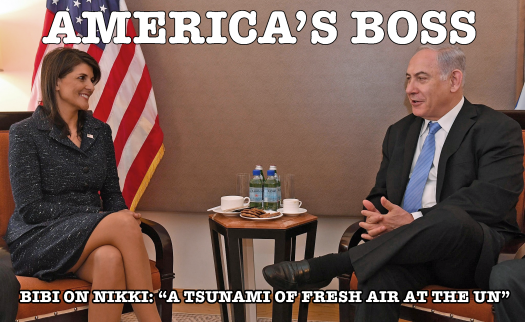 Law will ‘reveal ugly face of ultranationalist Israel in all its repugnance’, Hebrew University professor says

The proposed legislation being pushed by Benjamin Netanyahu (Bibi), Israel’s PM, would allow the state to “authorize a community composed of people having the same faith and nationality to maintain the exclusive character of that community”.

Israel is in the throes of political upheaval as the country’s ruling party seeks to pass legislation that could allow for Jewish-only communities, which critics have condemned as the end of a democratic state.

In its current state, the draft would also permit Jewish religious law to be implemented in certain cases and remove Arabic as an official language.

Many Israeli neighbourhoods and towns are already effectively segregated, with residents either vastly Jewish or Arab. In many places, it is tough for an Arab to move in, although segregation is not legal.

Writing in the progressive-leaning Haaretz newspaper, Mordechai Kremnitzer, from the faculty of law at the Hebrew University of Jerusalem, said the bill would “remove the mask so as to reveal the ugly face of ultranationalist Israel in all its repugnance”.

ANOTHER CAVE-IN FOR PUTIN, RUSSIA

Russia extends overflight privileges of US carriers ahead of deadline

On Monday, the tough-talking Nikki Haley, the virtual US president and the unofficial Israel’s ambassador at the UN, announced new and tougher sanctions on Russia. They followed this weekend’s US-UK-French missile attacks on Syria which went unanswered by Russia despite Putin’s bluster and the flurry of his officials’ threats beforehand (see PUTIN: TALK IS CHEAP, ACTION SPEAKS LOUDER THAN WORDS, April 15, 2018).

What was Russia’s response to these new sanctions?

A cave in. An utter and complete cave-in. Here’s an RT.COM story about it:

Moscow has extended overflight privileges of US carriers flying over Russia, hours before they were due to expire, the US State Department said, noting that it continues working with Moscow to secure “benefits” for US companies.

The US State Department announced that it has been relentlessly working with Moscow to extend an agreement which allows American passenger and cargo planes to fly in Russian airspace, drastically saving time and fuel on long-distance flights. Hours before the overflight agreement was due to expire at 7:59pm (2359 GMT), the State Department confirmed that Russia granted the much-needed extension.

What a bunch of fools the Russians who voted for him last month are. As are the millions of others around the world who see Putin as a hero who will free the world from the American-Israeli hegemony.

Yeah, right. Like Philippe Pétain saved France from Hitler? Or Gorbachev saved the Soviet Union from the West?

Lest we forget: Putin suggested to Bill Clinton in 2000 that Russia should join NATO.

One Reply to “WHAT BIBI WANTS, BIBI GETS”