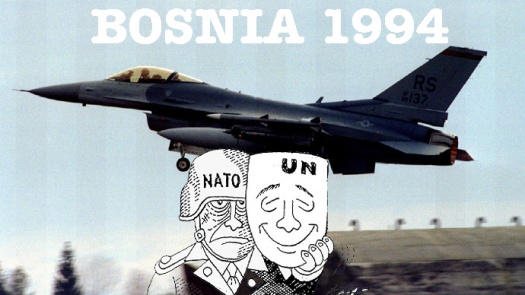 In the first military action in the (then) 45-year history of the North Atlantic Treaty Organization (NATO), U.S. fighter planes shoot down four Serbian warplanes in Bosnia.

The United States, 10 European countries, and Canada founded NATO in 1949 as a safeguard against Soviet aggression. With the end of the Cold War, NATO became obsolete… a military solution in search of a new problem.

Since none came forth, the United States invented a new mission for NATO: “Peacekeeping”. Which was a euphemism for entering a civil war which was raging in Bosnia at the time on the side of the Muslims. And later on the Croats, too.

Alas, there was no peace in Bosnia back in the early 1990s. With its recognition of Bosnia’s independence in April 1992, the U.S. government ignited a three-way civil war. The Bosnian Muslims, Croats and Serbs had been duking it out for nearly two years by this date in 1994..

The Serbs were winning on most fronts. The Bosnian capital Sarajevo, for example, which the Muslims held as they were the majority of the population there, was under siege by the Serbs.  So were several other Muslim enclaves in eastern Bosnia.

That’s when Bill Clinton and his warmonger-in-chief, Madeleine Alright aka Madam Halfbright, stepped in and stepped up – by giving NATO a new mission: Protect the Muslims and Croats.

Of course, in a typical New World Order double speak, they called it “peacekeeping.” Which at this stage of the war meant enforcing a “no fly” zone which NATO imposed over Bosnia in order to diminish the Serbs’s military superiority.  In 1994 and 1995, NATO planes enforced the no-fly zone over Bosnia-Herzegovina and struck at Bosnian Serb military positions and airfields on a number of occasions.

On February 28, 1994, the first of such aggressive attacks took place. “If it was a test, I think we passed the quiz,” Adm. Jeremy M. Boorda, the senior NATO commander for Southern Europe, who oversaw operations in Bosnia, callously old the New York Times.

Ironically, less than two years later, this NATO commander committed suicide at his office when it was revealed that he was wearing some military decorations he had not earned.

The American F-16’s came from a NATO base in Aviano, Italy, that comes under Admiral Boorda’s command (see NATO CRAFT DOWN 4 SERB WARPLANES ATTACKING BOSNIA https://nyti.ms/2FFz1UP).

By August 1995, NATO’s “peacekeeping” would escalate into a full scale war with massive bombing of the Bosnian Serbs’ held area. It was such brute force that eventually brought the Bosnian war to an end. After the US-forced Dayton Peace agreement was crafted in late November 1995 in Dayton, Ohio, NATO had a green light to expand into a new territory in eastern Europe.

On December 20, 1995, NATO began the mass deployment of 60,000 troops to enforce the Dayton peace accords, signed in Paris by the leaders of the former Yugoslavia on December 14. The NATO troops took over from a U.N. peacekeeping force that had failed to end the fighting since its deployment in early 1992,

It was the first of many NATO expansions into eastern Europe and toward the Russian border. The action the NATO F-16 jets took on this day in 1994 was the first of many belligerent actions and provocations that showed the world that NATO’s new mission was the same as the old one – aimed against Russia (see PROOF OF OUR 1994 “DRANG NACH OSTEN” THEORY: NATO TO EXPAND TO FORMER SOVIET STATES, SUSPEND COOPERATION WITH RUSSIA. Apr, 1994 and Apr 2014).