100 years ago this month, 2,000 Russian women volunteered to fight for their country. 300 passed the basic training. On July 21, 1917, the 170 women under the command of Maria Bochkaryeva (right), repulsed 14 German attacks in 3 days on the territory of today’s Belarus.

30 of them were killed, 70 wounded, including the commander. That’s how they earned the nickname the “death battalion.”

Of the 300 Russian women who passed the basic training and received their military banner on July 4, 1917 in a ceremony at Saint Isaacs Cathedral in Saint Petersburg, 70 never came back. More than 100 were wounded.

That’s the Russian version of FEMINISM and equality between men and women. Fighting for their country. 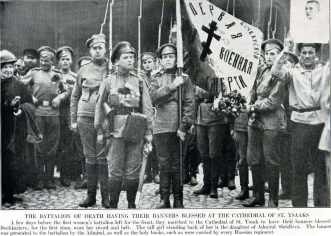 Now, with that as a preamble, take a look at these pictures of some of the leading American feminists. And then answer the question: “Do you see any of these women fighting for their country?”

“That’s a joke, right?” you might think. “A trick question.”

I know. It seems that way. For, it would be indeed absurd to imagine the likes of Whoopi Goldberg or Hillary Clinton or Oprah or some these other Hollywood stars, taking up arms and fighting for America. Most of them are too busy trying to emasculate the men, and fight for the gay, lesbian and transgender rights. And for women in politics. So they could all together lord over men.

And they do it by wagging their tongues as talking heads on TV, of course, not arms.

And they are not even being original at that. Like the early feminist Gloria Steinem, for example. At least she took some chances by spying for the CIA.

Did you know, by the way, that the “women’s lib” was actually funded by the New World Order chieftains, such as the Rockefellers?

With so many women around the world already in high political offices, why do you think women desire (political) power?

They don’t. Women already have more power than men and always have. Because they are in charge of CREATION. And LIFE PRESERVATION. That’s the natural order of things which the New World Order elite are trying to change. They want women to be like men.

“The world we know today, the world being propagated by the powers that be of the New World Order – it is the world of constant conflict and warfare… between the nations and tribes and between the genders.”

But why would women want to be like that? Why would they want to be tougher than men? “History is littered with millions of corpses that male ambition, greed and quest for power has left behind,” I wrote in this Aug 2016 editorial, WOMEN AND POWER: ATTRACTION CONCEIVED BY THE DEVIL (i.e., NWO) – http://wp.me/p3QU1S-1Fn.

Check it out. You will find many more fascinating facts about how and why the New World Order invented and funded feminism.

Now back to that Russian WW I story. The 2,000 Russian women who volunteered to fight the Germans did not do that because they were natural born heroins. They did it because by the summer of 1917, the Russian army was demoralized and headless.

The Tsar had been deposed. The Kerensky government was floundering. Men were deserting en masse.  So they decided to take up arms hoping this would inspire the men to do the same and keep on fighting.

It did not work, partly due to communist agitators who were trying to get the Russian soldiers to desert. So that the Bolsheviks could overthrow the government and take over. The seeds of the revolution, which was yet to come three months later, were being planted the summer of 1917.

So these Russian women-soldiers fought under most difficult circumstance, without any fanfare or parades, with the sole goal of protecting their motherland. And that is a mark of a true hero.

MYSTERY OF MARIA’S LIFE AND DEATH: WAS SHE REALLY EXECUTED?

The story of the first Russian female battalion commander Maria Bochkaryeva is quite fascinating. It would certainly make a great movie. Alas, Hollywood is not interested in Russian heroes. The Russians are always the bogeys in La La Land productions. So let me share with the gist of her life and death…

Maria was born into a peasant family in Imperial Russia in 1889.  Her life started off miserably. She was sent to work at the age of eight, received regular beatings, was a victim of sexual assault, and was physically abused by the men in her life, including her father and husband.

When the war with Germany and Austria-Hungary broke out in 1914, she decided to leave her past behind and become a soldier.

“I cut off my hair, dressed in men’s clothes, and provided myself with two loaves of bread,” Bochkareva recalls in her memoirs, written down by bilingual American journalist Isaac Don Levine in 1918.

Not surprisingly, she was denied entry into the Imperial Army because she was a woman and was advised to try herself out as a sister of mercy.

In November 1914, she joined the 25th Tomsk Reserve Battalion of the Imperial Russian Army where gradually she grew to be admired and respected by her fellow soldiers.

In 1917, after the February Revolution that toppled the monarchy, War Minister Alexander Kerensky approached Maria with the idea of forming Russia’s first female battalion.

After the Bolsheviks came to power in the October of 1917, Bochkareva fled to the United States via Vladivostok, in Russia’s Far East (like another “Dr Zhivago” script).

There she was received in the White House by the President Woodrow Wilson, who was said to have been moved by her story.

She returned to Russia in 1918 to continue her fight against the Bolsheviks. But she was arrested and sentenced to death. The execution was to be carried out on May 16, 1920.

However, when Maria was rehabilitated in 1992, no statement of the execution was found in the communist archives. Her biographer, Sergey Drokov, believes she was never shot, but was saved by journalist Isaac Don Levine, who was in Russia at that time, seeking (in vain) a meeting with Lenin.

And so the mystery of Maria’s life will live on forever (see https://on.rt.com/8if4).

Here’s are links to two stories at RT.COM which describe their plight and heroism.