“When you play with fire, you get burned by fire.”

“All who draw the sword will die by the sword.”

On Thursday night in Dallas, Micah Johnson, a black Army veteran, did what the government trained him to do: KILL. He used his military skills to take out enemy combatants as he perceived them – five white DPD officers – before being killed himself by a robot bomb deployed by the Dallas police.

Fifteen years ago, the morning of 9/11, this is what I wrote in part:

“To stop anti-American terrorism, Washington must stop its own state terrorism.  Both brands of terrorism are despicable and inexcusable…. May God have mercy upon the souls of all innocent people who died today as “collateral damage” of the Clinton/Bush arrogant foreign policy.  The Washington-led New World Order has now come home to roost.  For, “all who draw the sword will die by the sword.”  (“Collateral Damage Hits Home” Truth in Media editorial published on 9/11/01)

But these warnings fell on deaf ears of the people who have usurped the U.S. government and are using our military might to wage war against the world (see the 5-part series of AMERICA IS AT WAR WITH THE WORLD – Sep-Nov 2015). In Part 3, I also commented about the domestic war the ruling “elite” are waging against the American people (see WAR ON THE AMERICAN PEOPLE, Nov 3, 2015).

What happened in Dallas on Thursday night is another chapter of that war. A blowback. A government-trained killed turned on the government and started killing the Dallas police. Who, in turn, used a “weapon of mass destruction” (robot bomb) to kill him, a U.S. Army veteran. It was the first time in the history of U.S. policing that a bomb robot was used to kill an American citizen.

And that should give all of us a pause before we start to judge both sides in the Dallas tragedy. Here’s an excerpt from a story in Motherboard (Using a Bomb Robot to Kill a Suspect Is an Unprecedented Shift in Policing):

“Peter W. Singer, an expert in military technology and robot warfare at the New America Foundation, tweeted that this is the first known incident of a domestic police force using a robot to kill a suspect. Singer tweeted that in the wars in Iraq and Afghanistan, soldiers have strapped claymore mines to the $8,000 MARCbot using duct tape to turn them into jury-rigged killing devices. Singer says all indications are that the Dallas Police Department did something similar in this case—it improvised toturn a surveillance robot into a killing machine.

Improvised device or not, the concerns here mirror a debate that’s been going on for a few years now: Should law enforcement have access to armed drones, or, for that matter, weaponized robots? In 2013 Kentucky Senator Rand Paul staged a 13-hour filibuster that was focused entirely on concerns about the use of armed drones on US soil. Last year, North Dakota became the first state to legalize nonlethal, weaponized drones for its police officers.

“When domestic law enforcement officers can use force from a distance, it may become too easy for them to do so, and the inevitable result will be that these weapons are over-used,” Jay Stanley, a senior policy analyst for the American Civil Liberties Union wrote in a blog post while North Dakota was considering that bill. “When officers are not physically present, their perception of a situation and their judgment about when to apply force is more likely to be flawed, non-targets are more likely to be injured, and excessive amounts of force are more likely to be applied.”

Stanley also noted that drones and other remote weapons would “increase the militarization of the police.”

The ability for police to remotely kill suspects raises due process concerns. If a shooter is holed up and alone, can they be qualified as an imminent threat to life? Are there clear protocols about when a robot can be used to engage a suspect versus when a human needs to engage him or her? When can the use of lethal force be administered remotely?”

Good questions. The kind of questions our government officials should have been asking. Instead, our pathetic president and the pretender to the throne (Hillary) are again harping for gun control. Never mind that statistics prove that there is absolutely no relationship between gun ownership and the number of murders in the U.S. (see the chart). 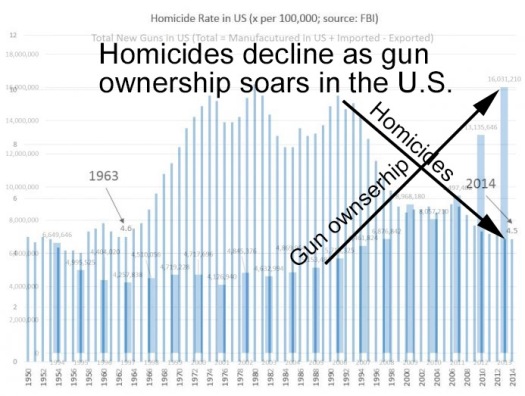 Their goal is evidently to disarm the nation so they could shoot us like ducks at will.  Or blow us up with a “weapon of mass destruction” as the Dallas police did on Thursday night.

Micah Johnson, a black Army veteran, who was apparently wounded in a shootout with police, wrote the letters “RB” and other markings in his own blood. The investigators are trying to decipher their meaning by looking through evidence from Johnson’s suburban Dallas home.

Whatever they find, or think they have found, will be of little consequence. The credibility of the U.S. police is at an all-time low. The only way to start to regain it is to renounce violence, and abandon the use of the “weapons of mass destruction,” like that robot bomb.

And a global scale, the only to win the “war on terror” is for the U.S. government to stop acting as the world’s biggest terrorist, and bring our troops back home. Which is the same message I broadcast to the world the morning of 9/11.

Fifteen years later, we have ample additional evidence of the futility of violence. Paraphrasing Mahatma Gandhi, “if we keep up the eye-for-an-eye policy, the whole world will go blind.”

Meanwhile, if you ignore the partisan rhetoric and let the facts speak for themselves, the first two charts tell the real story about what’s going on in our country.

Considering the widespread militarization of the police, no wonder the police killings are going through the roof as the police fatalities are declining.

That’s something this writer earned about in Dec 2014 – see OBAMA REFUSES TO REVERSE MILITARIZATION OF POLICE IN AMERICA, DEC 2, 2014 – https://truthinmediablog.wordpress.com/2014/12/02/on-police-militarization-in-america/

What happened in Dallas on Thursday night was an escalation of an already alarming trend – a pushback against the police killings across the country.

Paraphrasing Mahatma Gandhi, “if we keep up the eye-for-an-eye policy, the whole world will go blind.”

Or Did He? Some Facts in Official Stories Don’t Add Up

“On Sunday morning in Baton Rouge, Gavin Long, a black U.S. Marine veteran, did what the government trained him to do: KILL. He used his military skills to take out enemy combatants as he perceived them – five white police officers – before being killed himself by Baton Rouge police – on his 29th birthday.” 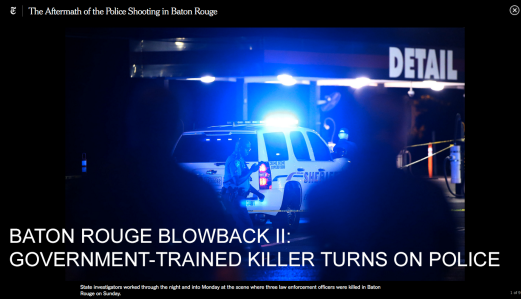 The preceding was the lead to the Truth in Media editorial “DALLAS BLOWBACK: GOVERNMENT-TRAINED KILLER TURNS ON POLICE” (http://wp.me/p3QU1S-1vb). I only changed the names, places and the dates. What happened in Baton Rouge on Sunday morning was a virtual replay of an assault on Dallas police on Thursday a week earlier. Blowback II.

That’s at least what one would have to conclude reading our government and lamestream media dispatches. They are all painting the alleged killer, Gavin Long, as an anti-police vigilante. And it all sounds quite plausible. The man had virtually incriminated himself by posting incendiaries messages and videos on the internet.

SHOOTING HAD STARTED BEFORE THE POLICE ARRIVED

Except for one thing: The shooting had already started BEFORE the police arrived, according to eyewitnesses quoted by London’s Daily Mirror.

“This was not a come at police shooting,” the witness said. “There were men out here shooting at each other before police ever got here.” (see Daily Mirror UK – https://is.gd/nwcqwW).

Check out also this quote from a New Orleans newspaper:

After hearing the shots, Vancel said he saw one citizen lying on the ground and a second one carrying an assault rifle before he sought refuge in a home nearby. He then hear more gunshot, apparently after police arrived on the scene.” (seeThe Times-Picayune – https://is.gd/MX92u9).

So the police were RESPONDING to a “shots fired” call. They were not necessarily the target, as in Dallas.

No mention of that important fact in any of the major media reports. Why not? Because the government-media spin doctors have decided to act as a judge and a jury and condemn the only dead alleged assailant as a culprit?

The truth is sometimes murky. Especially when deliberately obfuscated by those in government who are driving the case for gun control. So keep your eyes and ears and minds open. And don’t believe everything you see in print until your heart tells you so.

But seeing is believing, some say. And what you see in the picture below is yet another proof of tremendous militarization of police in this country.

Look at the heavily armed police carrying assault rifles and shotguns. Like the mafia. Only in uniform. Except this is not a movie. This is a scene from a Baton Rouge street on Sunday July 17, 2016.