Christiana Amanpour, a London-born CNN journalist of Iranian descent, has made a name for herself as a warmonger and “hate minstrel” of the New World Order over the last quarter century with her reports from various war theaters around the world.

What CNN’s uninitiated viewers do not necessarily realize is the extent to which her broadcasts have been biased and misleading. Some call that kind of reporting “advocacy journalism.” The Truth in Media calls it by its real name: DECEPTION. In fact, that kind of hateful and deceptive reporting was the reason the Truth in Media was formed 25 years ago.

And now, here’s a story that was just published today by RT.COM about Amanpour’s interview on CNN with Anissa Naouai, an American based in Moscow, who has reported for RT from around the world. Perhaps the most important thing about the interview is the part that CNN edited out.

Why? Because Naouai called a spade a spade and Amanpour a State Department propagandist, citing her warmongering work in Bosnia and Syria as examples. in the end, Amanpour got flustered and lost it in the end.

Here’s an excerpt from a transcript of the interview that CNN edited out. You can also watch both the uncut and edited versions at the RT.COM web site:

AMANPOUR: Alright. I’m telling you right now that there is legislation underway that makes it difficult for us to broadcast. And it’s not just us. It’s television all over the place. But my real question to you is: do you feel that it’s healthy for a society just to get a diet of one side rather than the other? And that is what’s happening.

NAOUAI: I disagree that that’s what’s happening. Certainly at Russia Today, like I said, we always cite the Ukrainian government. We always cite Western governments, Europe. If you want to analyze internal Russian news, I’m not sure I’m the best person to do it, to be honest. But certainly, at Russia Today, we always try to show both sides of a – do we show more of a Russian perspective? Of course we do, because that’s the perspective that’s being sidelined. But it’s an absurd question coming from someone that’s propagated the line of the State Department for over 15 years. I mean, it’s absolutely absurd.

AMANPOUR: Well, are you talking to me?

NAOUAI: Yes. Absolutely I’m talking to you. Who else would I be talking to?

AMANPOUR: Are you talking to me?

AMANPOUR: You’ve got to be kidding me…

NAOUAI: You’ve propagated the line of the State Department for over 15 years, starting with Yugoslavia and all the way into Syria. And now you’re doing it for Ukraine, essentially. Absolutely, I’m talking to you.

NAOUAI: I’ve seen lots of your reports and in not one report where you find you questioning the United States government and their policy. And we, with our Russian propaganda, question thosearms to the FSA, question those arms to al-Nusra and other leagues. And now today we have ISIS.

AMANPOUR: – as an act of research and as an act of education, go back and find all my work on Yugoslavia and all my work on Syria and match that with the – with the – with the policy of the United States government and furthermore, go back and watch what launched me and that was a to-and-fro with President Clinton challenging his policy on Bosnia and Yugoslavia. So Anissa, listen, I have respected you but I really don’t think that you should be doing this to me, of all people, on this – on this broadcast and on this satellite link. And you’re wrong. And I challenge you to go back…

NAOUAI: Yes, how dare someone tell CNN to check who their sponsors are, what governments they are working with!

NAOUAI: How dare someone come on CNN and say that!

AMANPOUR: No! Hey, excuse me, no, no, no, you just said whatever you wanted to say. When you become ad hominem to me, that’s a problem, because you’re not doing it from a basis of knowledge.

NAOUAI: Well, let your viewers decide, Christiane. I think that’s the fairest way out of this debate.

NAOUAI: Let your viewers decide. Let them go back to your work in Yugoslavia.

AMANPOUR: What did you say?

NAOUAI: Let your viewers decide. Let them go back to your work in Yugoslavia and see if it doesn’t fall exactly in line with the State Department’s line.

AMANPOUR: I tell you what. You just go and see the interview with President Clinton and then you’ll be able to choose, because you can be sure I’m not putting this on the air, Anissa. It’s a personal attack.

NAOUAI: You were basically encouraging Bill Clinton to go to war.

AMANPOUR: Oh, and that was what Bill Clinton wanted, was it?

NAOUAI: I don’t know what Bill Clinton wanted. I’m talking about your work as a journalist.

*NOTE: James Rubin was the State Department spokesperson at the time Madeleine Albright was Secretary of State. Rubin and Amanpour married in Jan 1998.

AMANPOUR’S OTHER GUEST, FORMER RUSSIAN PM, FIRED BY PUTIN IN 1994 AMID FRAUD ALLEGATIONS

By the way, the other guest on Amanpour’s show was the former Russian prime minister Mikhail Kasyanov. Since being fired by the Russian president Vladimir Putin in 1994 amid fraud allegations, Kasyanov has become a vocal Putin critic.

He has also been linked with the former Russian business mafia – the billionaires Leonid Nevzlin and Boris Berezovsky – both in exile after corruption indictments against them in Russia, and also by former chess world champion Garry Kasparov.

Kasyanov also allegedly accepted two percent bribes during his term in office. Which earned him a nickname “Misha 2 percent” in the Russian media.

Here’s an excerpt about Kasyanov from Wikipedia:

“Allegations that Kasyanov took a two percent commission in exchange for ignoring bribes and illegal business ventures whilst he was working at the Ministry of Finance between 1993 and 1999 led to him being dubbed as “Misha 2 percent” in the Russian media. In Russia’s uncertain economic future, written for the United States Congress Joint Economic Committee, the allegations are described as credible, and a Spiegel article from 2007 notes that Kasyanov insists that his only earnings as a public servant was his government salary and he was only involved in one private business venture since leaving the post of prime minister. The same article also claims that Kasyanov purchased the state-owned dacha of former Communist Party of the Soviet Union ideologue Mikhail Suslov which was worth several million euros.

On 11 July 2005, the Russian Office of Public Prosecutor started to investigate the privatization of two houses formerly owned by the government. According to allegations first made by the journalist andState Duma member Aleksandr Hinshtein,[18] two luxury government houses had been put up for sale in 2003 by a Kasyanov decree. According to the court verdict of 16 March 2007, he was to return a house and pay 108,135,000 rubles in damages to the government for using the property illegally (approx. USD 4,150,000 or €3,130,000).”

All of the preceding made Kasyanov a valued guest on Amanpour’s CNN show. “Birds of a feather flock together.” In fact, he was in Washington sitting right across from Amanpour during the interview.

During the time the Truth in Media editor worked as a war correspondent in former Yugoslavia (Bosnia, etc.), he had seen many examples the western media biased reporting. Sometimes, that included outright lies and deceptions. That was the main reason the Truth in Media was formed as a non-profit 25 years ago.

CNN distinguished itself back then as one of the leaders in this Media Hall of Infamy. And Christiana Amanpour, then also a CNN war correspondent from Bosnia, was its chief “Minstrel of Hate” (against the Serbs), as we later commented.

Here’s an excerpt from a blurb about her work in Bosnia in Wikipedia:

“She reported from the Bosnian war and other conflict zones. Because of her emotional delivery from Sarajevo during the Siege of Sarajevo, viewers and critics questioned her professional objectivity, claiming that many of her reports were unjustified and favoured the Bosnian Muslims, to which she replied, “There are some situations one simply cannot be neutral about, because when you are neutral you are an accomplice. Objectivity doesn’t mean treating all sides equally.”

In other words, right from the get-go, Amanpour was unabashedly pro-Muslim and anti-Serb in Bosnia. Which was the Clinton State Department policy at the time, led

and administered by the person we dubbed the “Secretary of Hate,” Madeleine Albright, or “Madam Halfbright”.

At times, Amanpour was caught redhanded in outright lies and deceptions. Here’s another excerpt about her work in Bosnia from Wikipedia:

On 22 December 1992, during the Bosnian War, Amanpour was reporting from Kiseljak, not far from Sarajevo. Kiseljak was in Croat hands, undamaged, and ostensibly well supplied with necessities. Amanpour reported that, “While people in Sarajevo are dying from starvation, the Serbs are living [in Kiseljak] in plenty”, a report that was subsequently criticized by some analysts as spreading “misinformation” and “beautiful lies”.

On 9 October 1994, Stephen Kinzer of The New York Times criticised Amanpour’s coverage, in general, of the Bosnian War. Kinzer quoted a colleague’s description of Amanpour as she reported on a terrorist bombing in the Markale marketplace of the Bosnian city of Sarajevo:

[Christiane Amanpour] was sitting in Belgrade when that marketplace massacre happened, and she went on the air to say that the Serbs had probably done it. There was no way she could have known that. She was assuming an omniscience which no journalist has.

For her service in broadcasting the New World Order lies and deceptions, in 2006, Amanpour was awarded the title of an “honorary citizen of Sarajevo” (Bosnia’s capital).

After Bosnia, Amanpour continued that kind of propaganda work for the State Department under the guise of a CNN reporter in other world conflict zones – Iraq, Afghanistan, Sudan, and Syria, among others.

For her faithful service to New World Order’s “perpetual war for perpetual commerce” (motto), she was rewarded at CNN with her own nightly talk show.

Now, check out not the comments I posted today about an amazing performance by the American journalist in Moscow, Anissa Naouai:

Bob Djurdjevic: Well done, Anissa. I have never seen this CNN media whore so flustered. No wonder they snipped out the part of the interview in which you pointed out examples of her being a virtual State Dept propagandist.

I used to work as a war correspondent in Bosnia and other parts of Yugoslavia. So I know firsthand that Amanpour earned her CNN newsdesk stripes with her lies and agitation in Bosnia and Kosovo. Here’s one of my stories from March 1998 which predicted that the Bosnian war would spill over into Kosovo and explained why that would happen. http://www.truthinmedia.org/Bulletins/tim98-3-1.html

Bob Djurdjevic: In a July 1999 editorial comment, I called Amanpour, a
London-born “journalist” of Iranian descent, the State Department’s “Minstrel of Hate” – a term derived during the era when Madeleine Albright served as Clinton’s “Secretary of Hate.”  James Rubin, Albright’s chief of staff, eventually married Amanpour (in Jan 1998), thus completing the family circle of hate and war advocates  – http://www.truthinmedia.org/Kosovo/Peace/ps22.html 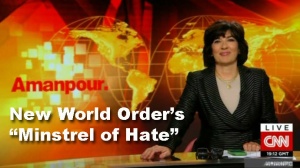 In an unrelated story published in today’s Huffington Post, Putin said it was wrong to see U.S. newspapers as independent, just because they were able to criticize President Barack Obama. Putin said he saw the press as a political tool.

“How can it be independent if it works together with the political opponents of the White House chief?” Putin said. “There is no independence; there is full dependence and the servicing of certain forces.”

There is no independence (among U.S. media); there is full dependence and the servicing of certain forces.” (Putin 11-24-14)

Putin said Russia also has such critical newspapers and sometimes he has to read them because his press secretary brings him “all sorts of filth.”