US president becomes laughing stock of the world

UNRAVELING OF A MEGALOMANIC, NARCISSISTIC, SCHIZOPHRENIC PRESIDENT WHO TRUMPS HIMSELF

Trump: I am “a very stable genius”

The controversial book (Fire and Fury) did not expose a megalomanic, narcissistic, schizophrenic president to the world. Donald Trump did it himself with his own words:

“I think that would qualify as not smart, but genius….and a very stable genius at that!” (excerpt from a Trump tweet Jan 6, 2018)

And with those words, Trump launched himself into immortality. Never before has America has a president so full of himself, so shallow, so insecure, so immature.

“They all say, ‘He is like a child,’ and what they mean by that is he has a need for immediate gratification,” the author of the book Fire and Fury, Michael Wolff, told NBC on Friday. “It’s all about him.”

Ironically, Trump posted those “very stable genius” words on Epiphany (Jan 6). And now, the whole world can experience an epiphany about who and what Trump really is.

But never before have we had a megalomanic, narcissistic, schizophrenic president who has now become the laughing stock of the world. Also see Psychopaths and Megalomania (Part 2) – Psychogendered – http://psychogendered.com/2015/01/psychopaths-and-megalomania/

It did not take long for Trump to put his foot in his mouth again.

Donald Trump has been branded a shocking and shameful racist after it was credibly reported he had described African nations, as well as Haiti and El Salvador as “shitholes” and questioned why so many of their citizens had ever been permitted to enter America.

US diplomats around the world were summoned for formal reproach, amid global shock that such crude remarks could ever be made in a semi-public meeting by the president of America.

In a strongly-worded statement, the UN said it was impossible to describe his remarks as anything other than racist, while the Vatican decried Trump’s words as “particularly harsh and offensive”.

The 55-nation African Union said the remarks were “clearly racist”.

Trump initially allowed reported accounts of his comments to go unchallenged, but went into damage limitation mode on Friday, insisting he had not used derogatory words – but admitting that the language he had used at a meeting with Senators on immigration was “tough”.

But the democratic senator Dick Durbin – who was present at the meeting with Trump on Thursday – insisted that the reports were entirely accurate. For more, see… https://goo.gl/19CAgW

Just got this cartoon from a friend in Netherlands.

BTW – Jacques Ferdinand Devereaux was my 18th century incarnation. I was born in Paris. My father was French, my mother Austrian. I was a disciple of Count Saint Germain in that lifetime. After meeting Mozart in Paris, I moved to Vienna where Amadeus and I collaborated on alchemical power of music.

TRUMP GETS A CLEAN BILL OF MENTAL HEALTH FROM HIS WHITE HOUSE NAVY DOCTOR, NOT A PSYCHIATRIST

DJURDJEVIC: Only someone whose mental health is in question would request a test to prove that he is okay.

Normal people would just shrug off such innuenda and see to it that their actions would prove the accusers wrong.

Only someone who wants to manage the outcome would hire a Navy doctor whose salary he pays to be the judge of that.

Was this doctor a qualified psychiatrist? No.

Rear Admiral Ronny Jackson graduated from the medical school at the University of Texas in 1995. From there, he went to the Portsmouth Naval Medical Center,

Did the tests the doctor performed have anything to do with diagnosing a psychopathic behavior? Not that we know of.

Yet Trump paraded today his White House doctor, this Rear Admiral, who is trained as an emergency doctor, as the conclusive authority on the president’s mental health.

You would think that requesting such an assessment by a non-psychiatric professional alone would be yet another example of Trump’s psychopathic behavior?

Why does that matter?

Because Duke University Medical Center professor of psychiatry Dr. Jonathan Davidson published a study that reviewed biographical sources for the first 37 presidents (from 1776 to 1974).

Expert psychiatrists, unlike this Navy White House doctor, concluded that half suffered from mental illness, 27 percent while still in office.

Meanwhile, back to today’s news story…

Donald Trump has been deemed fit to serve as the president, the White House doctor announced after the US commander in chief voluntarily underwent a cognitive test to put questions about his mental health to rest.

The cognitive exam was Trump’s own idea. Jackson initially had “no intention” of including such a test in the US president’s first annual physical checkup since it’s not part of the routine procedure. However, Trump, according to Jackson, specifically asked to be screened for impairments such as Alzheimer’s.

Here’s an armchair psychiatrist test for you. The following are some of the traits of a psychopath. On my checklist Trump fits 13 of 20. What about you? 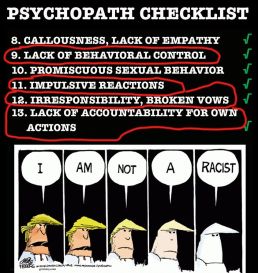 Toward the first anniversary of Trump’s presidency (Jan 20)

A Gallup survey found that Trump reaches the first anniversary of his inauguration with the lowest average approval rating of any elected president in his first year.

That poll showed that Trump has averaged just a 39% approval rating since his inauguration. The previous low was held by Bill Clinton, whose first-year average was 10 points higher than Trump’s, at 49%. 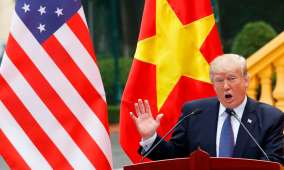 GLOBAL CONFIDENCE IN US LEADERSHIP ALSO HITS A NEW LOW

Global confidence in US leadership has also fallen to a new low, and the country now ranks below China in worldwide approval ratings, according to a new Gallup poll.

The survey of opinion in 134 countries showed a record collapse in approval for the US role in the world, from 48% under Obama to 30% after one year of Donald Trump – the lowest level Gallup has recorded since beginning its global leadership poll over a decade ago. 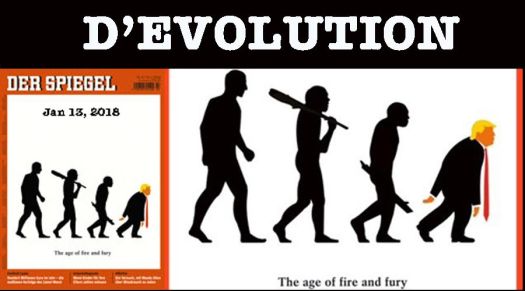 DER SPIEGEL (Mirror) is a German weekly news magazine published in Hamburg. It is one of Europe’s largest publications of its kind, with a weekly circulation of 840,000.

Devolution, de-evolution, or backward evolution – is the notion that species can revert to supposedly more primitive forms over time.

The current cover of DER SPIEGEL magazine was used as basis for this D’EVOLUTION image. DER SPIEGEL came up with the artwork, the Truth in media the headline.

From then on, he was just another patsy of the Deep State or New World Order, if you prefer.

Here are some milestones from my posts in the first year of Trump’s presidency. What started as a great promise to “Make America Great Again,” quickly dissolved into a string of broken promises.

The first of those was Trump’s backing away from his vow to prosecute Hillary. Which was the reason I voted for him. It took Trump only two weeks to make me regret that vote. I have been regretting it nearly every day since.

Trump’s presidency was virtually over by the end of July when he buckled under to the pressure of Russia’s enemies in Congress and signed the new sanctions bill “against his better judgment.” 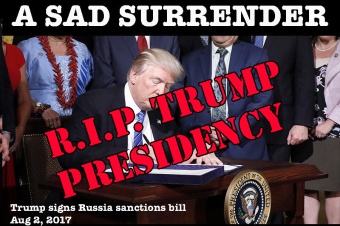 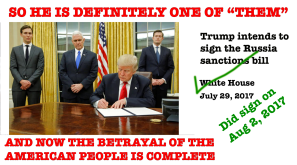 From then on, the man who promised to “drain the swamp” in DC became just another reptile in it.

Trump proved it again on Dec 6, when he cow-towed to pro-Israel lobby and recognized Jerusalem as its capital – a move condemned by a vast majority of the world community (the UN vote against it was 128-9).

No wonder the recent poll has shown that Trump’s approval rating is the lowest of any president after the first year in office. Even the lowly, and later thoroughly disgraced, Bill Clinton scored 10 points higher than Trump.

So it goes… I hang my head in shame. Because I allowed Don the Con to con me, too, even though I called him a “Trojan Horse” in a Feb 2016 editorial. It was the first time EVER that I had voted for a Democratic or Republican candidate.

TRUMP’S 757: ALL GARISHNESS MONEY CAN BUY

Even before he became president, Trump’s ostentatious custom-fitted private jet – a Boeing 757-200 which reportedly cost around $100 million – was referred to as “Trump Force One.”

Take a video tour of it by Amanda Miller, one of Trump’s Apprentices, as shown on Trump’s Youtube Channel. 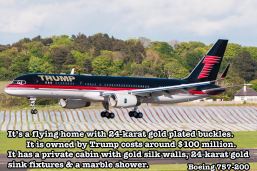 AND NOW, HERE’S A CHAPTER FROM TRUMP’S AVIATION EXPERIENCES THE PRESIDENT MIGHT PREFER TO FORGET…

TRUMP AND KINGDOM OF GOD

“It’s easier for a camel to go through an eye of a needle than for a rich man to enter the Kingdom of God” (Bible verse, Matthew 19:24)

The other night, I was watching on PBS an episode from season 2 of an excellent British series VICTORIA. At one point, the then British PM, Sir Robert Peel, leader of the Conservative Party, uses this Bible verse when trying to dissuade the Queen from one of her ideas.

Immediately, I had this image in my mind of Trump’s lavish opulence which he so garishly flaunts. I thought it was apt to create it for the first anniversary of his presidency.

And on that note, we can put a period at the end of Trump’s first year in office.