TRUMP REACHES OUT TO RUSSIA

Truth be told, they and the lamestream media started barking against a possible Trump-Tillerson foreign policy ticket well before today’s announcement. And now, their worst fears have come true. They are losing control of US foreign policy, their sacred turf since almost a century ago. Neither Trump nor Tillerson are members of their “elite” New World Order clubs.

It was almost comical to see the headlines and the comments in the lamestream media about Donald Trump’s ultimate pick for Secretary of State, the Exxon-Mobil chairman Rex Tillerson.

Congressional war dogs, who have been for decades barking out venom against Russia as obedient servants of American corporate “death merchants,” are terrified that peace may finally break out. Which would mean they’d be, of course, out of work. So now they are threatening a fight over Tillerson’s confirmation.

Well, that’s sort of predictable. Having lost the election, they are now trying to sabotage the work Trump is trying to do. They will lose. As they did in November.

Maybe the Secretary of State confirmation hearings will give Rex Tillerson a chance to earn the nickname T-Rex (Tyrannosaurus Rex) – the most fearsome of all prehistoric animals. Hopefully Rex will devour the NWO congressional war dogs for breakfast, and then he and Trump together will finish off their puppet masters for dinner. 🙂 That’s my wishful thinking anyway.

And then – peace may finally break out. God willing.

If that were to come to pass, I could even forgive Trump giving Hillary a free out of jail pass. 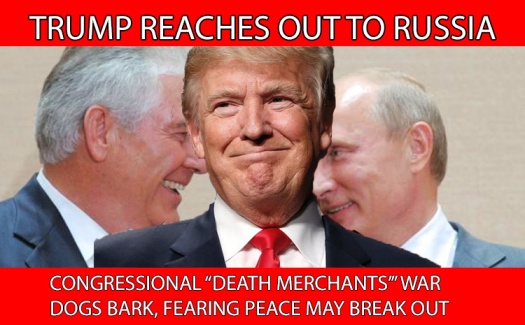 The selection of the ExxonMobil president marks the end of a drawn-out search to fill the position, during which time Trump considered several potential contenders, including former presidential candidate Mitt Romney – who was very critical of Trump during the election campaign – former New York mayor Rudy Giuliani and former CIA chief David Petraeus.

However, Tillerson’s approval by the Senate is far from guaranteed. His close ties to Russia, where he has completed a number of projects and was awarded the Order of Friendship by Vladimir Putin in 2013, as well as his lack of experience will be cause for concern for senators from both parties. 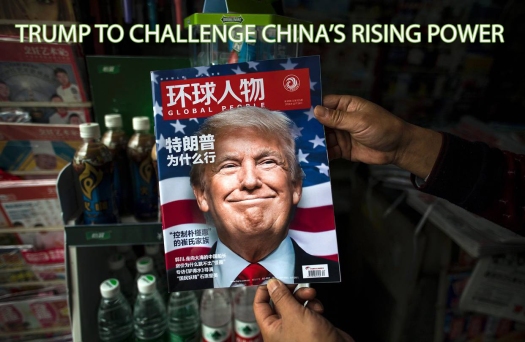 TRUMP PUTS HIS FOOT DOWN ON CODDLING CHINA AND DEMONIZING RUSSIA

For a man who was said to have no foreign policy experience, Donald Trump made two presidentially deft geopolitical moves this month. Both are aimed at neutralizing China’s growing power in the world and stopping the demonization of Russia.  So Trump is already starting to shake up the world even if he is not even president yet.

Trump’s first bold move was to take a phone call on Dec. 2 from Taiwan’s President, Tsai Ing-wen. This set off alarms in Beijing. Red China’s leaders are now fearing that Trump may be challenging their longstanding “one China” policy.

If so, Trump will playing Nixon’s “China-card” in reverse, by wooing Moscow to isolate Beijing. And not just Nixon’s card. George H. Bush not only looked the other way when Chinese communist leaders massacred thousands of Tiananmen Square pro-democracy demonstrators on June 4, 1989. He rewarded them with hundreds of billions of dollars in foreign investments that turned China into a virtual factory of the world over the next decade (see China: Real Cold War Winner – Russia Is Still a Bogey, March 2002 – https://goo.gl/Gct43i).

This writer had spent a lot of ink in his global business and geopolitical articles in the 1990s railing against the foolhardiness of such policies (see, for example,  Who Lost China?, Aug 1999 – https://goo.gl/skw76B,  Killing Russia Softly, Apr 1997 – https://goo.gl/C0Erm9). 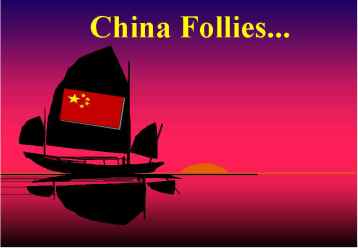 REACHING OUT TO RUSSIA

Xi Jinping, China’s president, referred to Russia and China as “friends forever.” That assertion will now have to pass a Trump test. 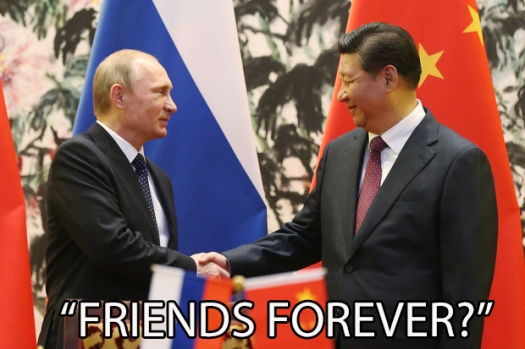 Because Trump’s second foreign policy move this month – appointing the ExxonMobil CEO Rex Tillerson Secretary of State – threatens to cause a possible rift between Russia and China. Until now, the two bedrock members of anti-New World Order BRICS organization – Russia and China – have been close allies, united in their resistance to the U.S. global hegemony.

But Tillerson enjoys historic ties with Vladimir Putin and Russia, where he was awarded the Order of Friendship, he enjoys no such history with China (see ‘Friends forever’? China wary of Rex Tillerson wooing away Russia, Guardian, Dec 14, 2016). And we already know what his new boss thinks of China.

WEAPONIZING US TREASURIES AGAINST CHINA

In fact, some commentators say that Trump may be Weaponizing China’s $1.16 Trillion of US Treasuries (e.g., Daniel Kruger, Forbes CONTRIBUTOR).

China is the largest holder of US Treasuries. It held $1.16 trillion of U.S. government debt as of September. For more than a decade, politicians have expressed concern that China and other foreign government could use their significant stakes in Treasuries against the U.S. by dumping them on the market. Such a move would potentially drive borrowing costs in the U.S. higher, they argued.

True. But this would also hurt China’s exports – the sacred cow of its communist government. Because should China try to dump the Treasuries, it would weaken the dollar and bolster its currency, known variously as the yuan and the renminbi. Which means the price of Chinese goods would rise, thus diminishing their global market appeal.

So selling off treasuries would be China cutting off its nose to spite itself. Or shooting itself in the foot to hurt the U.S. Chinese leaders are ruthless communists but they are not stupid. And Trump knows it. So he is using their massive treasuries holdings as a weapon with which to wag their tail.

So do you still think America’s president-elect is inexperienced in foreign affairs?

During presidential campaign, and even now, the lamestream media keep fabricating stories about Russia’s alleged rigging of the U.S. election without offering any proof. Perhaps that’s because the establishment stooges remember how they did just that in Russia 20 years ago.

In early 1996, Boris Yeltsin’s approval rate was in the single digits. He had carried out a presidential coup, started a sham war in Chechnya, and had helped oligarchs pillage the nation which brought the economy to its knees, with people like this little girl in Moscow starving and forced to beg for food.

Yet in July 1996, he was elected president for the second time. How did this happen?

“It took one of the most unfair, costliest and most fraudulent election battles in the history of democracy,” writes Mark Nicholas on Dec 12, 2016 in RUSSIA INSIDER. “All with the complicity of the United States which backed the Russian alcoholic in chief every step of the way (as it had during the ’93 coup).”

(see If Russia Did Rig the US Election It Would Only Be Payback for Yeltsin’s Second Term: http://russia-insider.com/en/if-russia-did-rig-us-election-it-would-only-be-payback-yeltsins-second-term/ri18129). 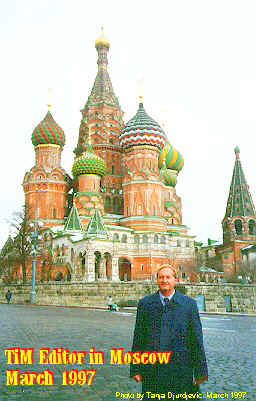 Alleging Russia’s complicity in Donald Trump’s win is merely a sign of desperation. Like Don Quixote, the New World Order establishment are swinging at the windmills. They won’t be doing it for much longer.

Even before Trump has been sworn in, he is starting to drive the New World Order snakes out of America, just as Saint Patrick did in Ireland in the 5th century (see the Truth in Media editorial New World Order Snakes to Be Expelled from America, Oct 24, 2016).  That’s a hopeful sign.

Let us pray that he continues draining the swamp faithfully after he assumes office.

PS: By the way, Russia, Serbia and China were the only countries that expected Trump to win. Take a look at this chart.

TOWARD A TRIPOLAR WORLD

If Donald Trump is really as smart as his early moves suggest, he will realize that alienating China will NOT “Make America Great Again,” his election slogan. Only a true partnership between the three global power centers will. Which, at the present time means, the U.S., Russia and China.

Because since time immemorial, triangles have been the building blocks that offer both strength and stability.

Think Trinity if you are religiously inclined. Think Giza Pyramids if you are a history buff. Think Merkaba*, an ancient symbol of creation, if you are spiritually endowed. Think milking stool, if you are a farmer. A milking stool has three legs for one simple reason. It’s nearly impossible to knock it over. Which comes handy with a restless cow. Or a world in a state of flux. 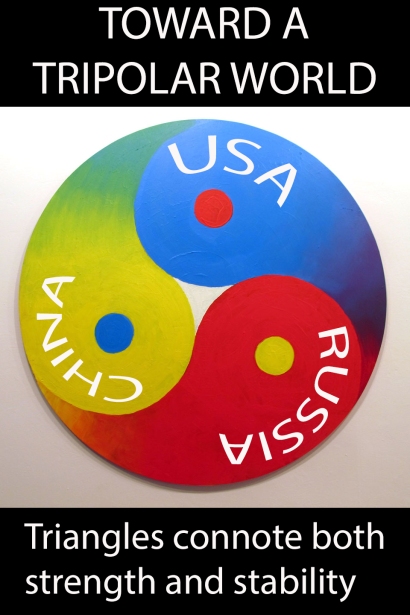 The 20th century has shown us that bipolar worlds do not work. Superpowers do not last. Before you know it, one partner will switch sides and turn on the other. They are easy to knock down and can lead to anarchy. And to world wars.

So if Trump really wants to make America great again, he must do so by mending fences with all nations, especially the most power-hungry ones. Like China. Not by appeasing them. Not by bombing them. Nor bribing them with U.S. investments. But by using the U.S. assets as leverage against China’s power plays so as to keep its ambitions in check.

Let us hope and pray that Trump is as wise as he is smart.

*NOTE: Merkaba is a geometrically precise field that is formed from the pattern of the first eight cells of the fertilized zygote. The location of these eight cells is in the geometrical center of the human body in the base or root chakra. The eight cells also provide the center point for all of the energy fields and grids that surround the body. Thus, the Merkaba field is the matrix of creation.

Merkaba is both an Egyptian and Hebrew word for the field of light energy and information that radiates from the human body as the star tetrahedron, also known as the Star of David. Here it is as the sacred place at the Earth’s solar chakra at the Rainbow Shower in Maui. Around the two triangles is the circle which provides the balance between them. And around the circles are the 12 petals of the Zodiac system, completing the ancient Sanskrit symbol of Anahata – the heart chakra.