The audience clapped at the end as if it were a live show.

When was the last time you experienced that in an American movie theater that did not have to do with jingoistic American-supremacy shoot-them-up or kill-the-bastards films, like Rambo or Rocky?

In fact, I believe I have never even been to a movie theater this year. I swore off Hollywood crap at about the same time I gave up Starbucks in late 2015.

It WAS wonderful. The film was made by a master director, a three-time Oscar winner, Oliver Stone.

“If Edward Snowden didn’t exist, Oliver Stone might have invented him,” writes Roger Ebert in his not-so-flattering movie review. “One can imagine a Stone film about a former employee of the U.S. government who becomes disillusioned with his country when he learns the depth of its deceit.”

“In fact, that last sentence could describe a few Stone films, and so “Snowden” has been widely anticipated as a return to form for the director of masterpieces like “Platoon,” “JFK” and “Born on the Fourth of July.” It’s his first film in four years and his first with a true story behind it in almost a decade (“W.”).”

Of course, the Hollywood movie critics, like the rest of the media whores, know very well which side their bread is buttered on. So one should not expect them to glorify, much less tell the truth, about a truly epic film of our time. “Our time” being the time of illegal surveillance and outright deception by the highest officials in our government.
But the American people know better. That’s why. even though it was the first matinee show of the day (2 PM), and despite the fact that the movie had been out already for 8 days, which is eternity nowadays in Hollywood flicks, THE THEATER WAS FULL!

As for Lindsay Mills, Snowden’s girlfriend whom he had allegedly “abandoned” when he left Hawaii on his way to Hong Kong, where he made the greatest whistleblowing disclosure of “our time,” guess what? She followed him to Moscow in October 2014. And the couple have lived happily there ever since. No betrayal there either way.
Try to marginalize that, Obama, Hillary, Bush’s, Bill Clinton and your rich backers in crimes against humanity and our Constitution.
Hail to Snowden and Stone! And to Lindsay Mills for standing by her man.
PS: Don’t expect this excellent film to win many Oscar nominations come December. Except if Trump wins. In which case the Hollywood brown-nosers will have to quickly change gears and start to kiss new butts.
Turncoats. Maybe that should be the title of the next Stone film? 🙂

We have just witnessed another case of the Truth in Media slogan -TRUTH TRUMPS POWER EVERY TIME – being demonstrated in real life. Edward Snowden, the former NSA employee who brought the most powerful government on this planet to its knees by exposing the Obama administration’s violations of the U.S. Constitution, freedom and democracy, has just received the “Alternative Nobel” prize for “his courage and skill in revealing the unprecedented extent of state surveillance violating basic democratic processes and constitutional rights.”

Winners of the Sweden-based Right Livelihood Award were announced today in Stockholm, one day ahead of schedule.

The 2014 Right Livelihood Laureates are:

Yet honoring Snowden has not been without controversy. The news of Snowden’s award seems to have caused embarrassment in Sweden. The Swedish foreign ministry in Stockholm has been the usual venue for such announcements for the past 18 years. This year’s awards were supposed to be unveiled tomorrow, Sept 27.

“But when the Swedish foreign minister, Carl Bildt, received the information late last week that one of the five recipients this year is the American whistle blower Edward Snowden, he refused to allow the prize to be announced in the foreign department’s building – despite a previous agreement,” said the Swedish Public Network who broke the news a day early. 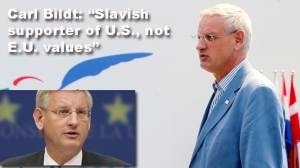 This was not the first time Bildt has distinguished himself as Washington’s lapdog. In fact, this former UN-envoy in the Balkans has been called a “slavish supporter” of U.S. policies no matter what. And during his stint as the UN-envoy in the Balkans during the 1990, he tried to ingratiate himself with all warring parties. As I result, he alienated everyone.

“In the Balkans, Bildt managed to unite all parties – against him.

Croats remember him accusing their former President Franjo Tudjman of war crimes and Serbs recall his subsequent fervent support for Kosovan separatism, a concept he is now viciously opposed to in Ukraine. He was initially sympathetic to the Bosnian Serb position before he managed to ingratiate himself with US officials and suddenly changed tack. So detested was Bildt in Croatia that, in 1995, their government declared him persona non grata. It was also around this time that he became friendly with the Clintons and assumed the role of America’s favorite European ‘useful idiot.’ (from Goodbye to Carl Blidt: Out of Touch and Out of Time, Sept 16, 2014)

So with his refusal to allow the presentation of “Alternative Nobel” prizes at the traditional venue – the Swedish Foreign Ministry – Bildt was simply doing what he does best: brow-nosing Washington.

Lest we forget, Washington also tapped Sweden to generated trumped up rape charges against another leaker of Washington’s transgressions – Julian Assange – founder of WikiLeaks. Like Snowden, Assange has been forced into exile to avoid Washington’s persecution.

Assange is still holed up iat the Ecuadorian Embassy in London in his case. In 2012, facing extradition to Sweden, he was granted political asylum by Ecuador.