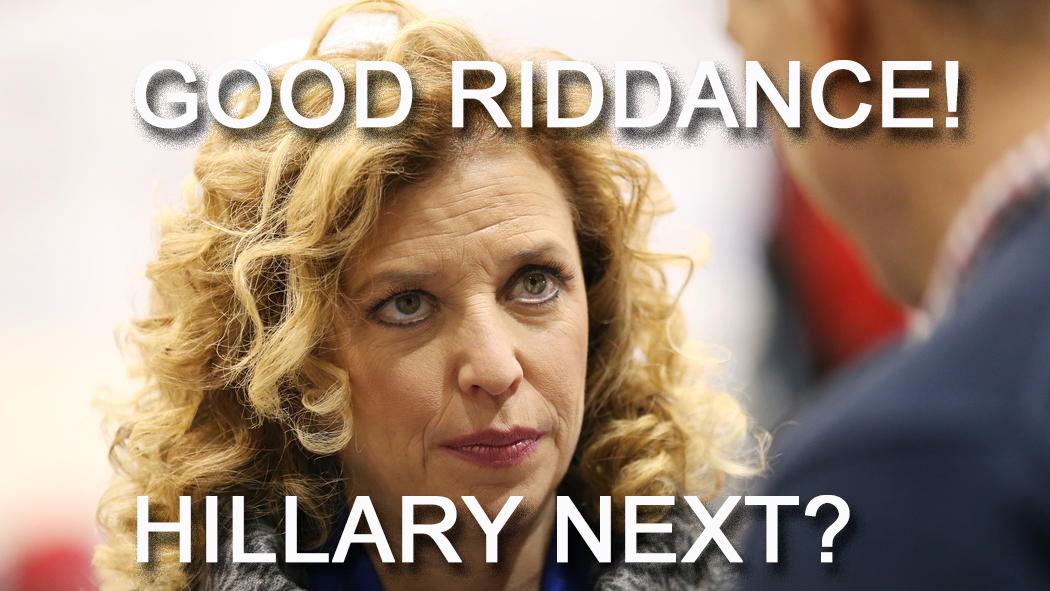 KNIVES ARE OUT FOR DNC CHAIR: WASSERMAN FORCED TO RESIGN

Could Hillary Be Next? 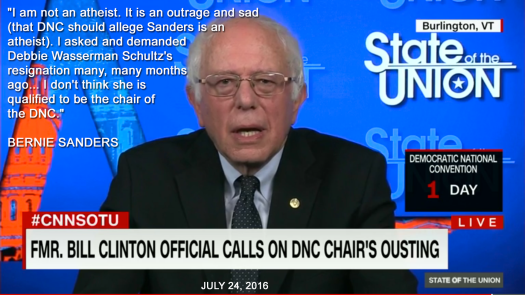 It took only two days for a massive 20,000-email avalanche of Truth to overpower the self-imposed new blockade of our lamestream media. Now that the knives are out within the Democratic Party demanding the head of the DNC chair Debbie Wasserman Schultz, even the New World Order whores like CNN are starting to lead with this developing story.

Here’s what CNN posted a few minutes ago:

A Hillary Clinton source expects Wasserman Schultz to be gone by the end of the day, while another Democratic source said President Barack Obama or a proxy for him may need to get involved and call Wasserman Schultz because her posture is that she was appointed by the president.” (See… Pressure mounts on Wasserman Schultz to resign @CNNPolitics http://cnn.it/2an4j6X)

In an interview with CNN this morning, Bernie Sanders, whom the DNC staffers have tried to undermine and slander so as to help Hillary Clinton win the primary, had this to say:

“I am not an atheist. It is an outrage and sad (that DNC should allege Sanders is an atheist). I asked and demanded Debbie Wasserman Schultz’s resignation many, many months ago… I don’t think she is qualified to be the chair of the DNC.”  (see Pressure mounts on Wasserman Schultz to resign @CNNPolitics http://cnn.it/2an4j6X).

PS: Things are moving faster than I can type. Just as I finished this story, I saw the news that Wasserman has already resigned. Good riddance!

Might Hillary be next? After all, the two were as thick as thieves. Hillary has dodged more bullets than Audie Murphy (America’s most decorated soldier). Could this DNC scandal be the bullet that finally takes her down? 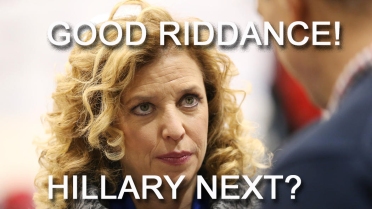 HILLARY PROMOTES DISGRACED WASSERMAN TO “HONORARY CHAIR” OF HER CAMPAIGN 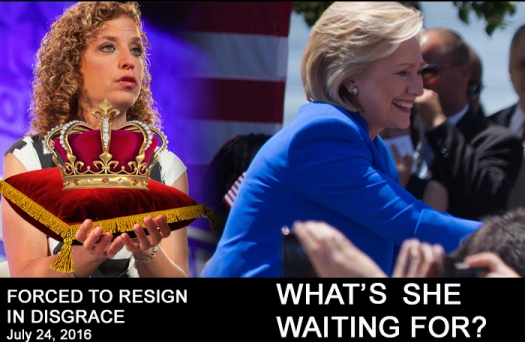 Hillary Clinton is thanking her “longtime friend” Debbie Wasserman Schultz after the Florida congresswoman’s decision to step down as chair of the Democratic National Committee. Clinton says that Wasserman Schultz will serve as honorary chair of her campaign’s 50-state program to help elect Democrats around the country.
DJURDJEVIC: Well, “birds of a feather flock together.” They have no shame. 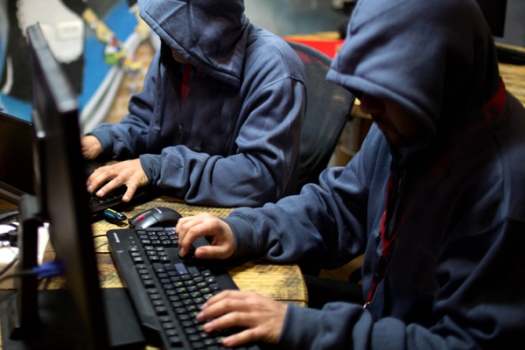 In a separate development, a defense publication said that two Russian intelligence groups were really behind the Wikileaks leak. One group, FANCY BEAR or APT 28, gained access in April. The other, COZY BEAR, (also called Cozy Duke and APT 29) first breached the network in the summer of 2015 (see How Putin Weaponized Wikileaks to Influence the Election of an American President – https://is.gd/p1epQv).

Here’s an excerpt from that story:

It’s the same group that hit the State Department, the White House, and the civilian email of the Joint Chiefs of Staff. The group’s modus operandi (a spearphishing attack that uploads a distinctive remote access tool on the target’s computer) is well known to cyber-security researchers.

In his blog post on the DNC breaches CrowdStrike’s CTO Dmitri Alperovitch wrote “We’ve had lots of experience with both of these actors attempting to target our customers in the past and know them well. In fact, our team considers them some of the best adversaries out of all the numerous nation-state, criminal and hacktivist/terrorist groups we encounter on a daily basis. Their tradecraft is superb, operational security second to none and the extensive usage of ‘living-off-the-land’ techniques enables them to easily bypass many security solutions they encounter.”

The next day, an individual calling himself Guccifer 2.0 claimed to be the culprit behind the breach and released key documents to back up the claim, writing: “Shame on CrowdStrike.”

MEDIA SILENCE: Proof-positive of Collusion Between Media and DNC/Hillary

Last night, I shared with you the news about the Wikileaks’ release of 20,000 emails that prove the collusion between DNC and Hillary Clinton. The emails reveal DNC officials tried to discredit Bernie Sanders and rig the Democratic primaries in Hillary’s favor. The emails also showed complicity of some of the major media, like MSNBC and CBS in this devious plot.

So you’d think that that kind of a bombshell news would dominate the headlines today. Well, think again. I just scanned the major media headlines. And have found out that our lamestream media whores are showing us in plain sight how they try to manipulate the news. And not just the media. The major internet companies are also colluding with the powers that be to censor this story and downplay the embarrassment to the DNC and Hillary.

There is no mention of the Wikileaks release at all in the top Google news headlines, for example. And as for Microsoft’s Bin, there is only one tiny story by Fox news at the very bottom of page 5! 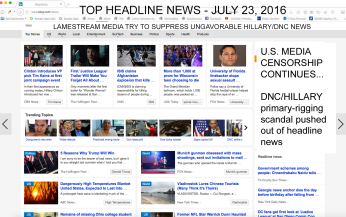 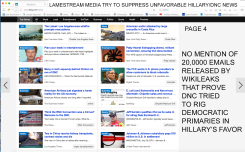 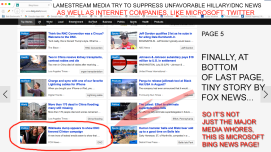 As for Twitter, through which the original release came, that internet company tried to throttle it right away, only to face the wrath of its angry users worldwide (see Washington Times – Twitter users erupt: #DNCLeaks disappears from trending news as WikiLeaks emails released – critics see censorship of a controversy that put Democrats in a negative light – https://is.gd/WP0MnG). 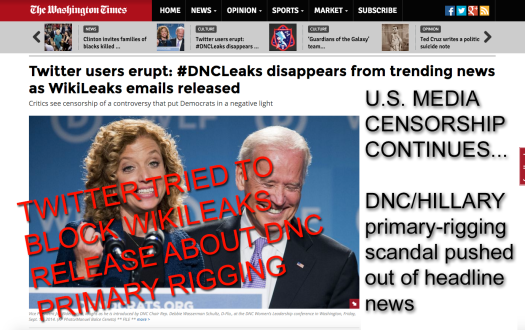 Oopsy daisy… can things get any more embarrassing for the Democrats?

Most Americans suspected that our political process has been corrupted by the ruling “elite”, but now there is PROOF

Blatant attacks on and mocking of Bernie Sanders

WHICH MAKES BERNIE’S ENDORSEMENT OF HILLARY ALL THE MORE PATHETIC

.
Top DNC officials criticized and mocked Bernie Sanders during the primary campaign, even though the organization publicly insisted that it was neutral in the race, according to emails made public by WikiLeaks.
Wikileaks release also implicated broadcasters MSNBC and CBS in trying to undermine Sanders in collusion with DNC.

DNC emails: Wasserman Schultz furiously pressured MSNBC after it criticized her “unfair” treatment of Sanders.
“This is the LAST straw,” wrote DNC chair when criticized for anti-Bernie bias. She complained to MSNBC’s president.
For more, see…