Four former US air force service members, with more than 20 years of experience

between them operating military drones, have written an open letter to Barack Obama warning that the program of targeted killings by unmanned aircraft has become a major driving force for Isis and other terrorist groups.

The group of servicemen have issued an impassioned plea to the Obama administration, calling for a rethink of a military tactic that they say has “fueled the feelings of hatred that ignited terrorism and groups like Isis, while also serving as a fundamental recruitment tool similar to Guantánamo Bay”.

Analysis Drones may predate Obama, but his resolute use of them is unmatched. Civilians have been killed and officials warn it will ‘weaken the rule of law’, yet the president’s actions indicate drone warfare won’t be going away anytime soon

In particular, they argue, the killing of innocent civilians in drone airstrikes has acted as one of the most “devastating driving forces for terrorism and destabilization around the world”.

ALTZAR: Furthermore, Wikileaks’s release of the CIA’s special Red Cell report dated Feb 5, 2010 shows that the U.S. intelligence officials have made the Obama administration aware that continuing its duplicitous foreign policy – advocating peace while killing innocent people all over the world, and refusing to cooperate with other government’s anti-terrorism efforts – may backfire on the U.S. Here’s an excerpt from that CIA report (https://file.wikileaks.org/file/us-cia-redcell-exporter-of-terrorism-2010.pdf):

• If foreign regimes believe the US position on rendition is too one-sided, favoring the US, but not them, they could obstruct US efforts to detain terrorism suspects. For example, in 2005 Italy issued criminal arrest warrants for US agents involved in the abduction of an Egyptian cleric and his rendition to Egypt. The proliferation of such cases would not only challenge US bilateral relations with other countries but also damage global counterterrorism efforts.

terrorism suspects or to allow witnesses to testify in their courts, they might respond by denying the same to the US. In 2005 9/11 suspect Abdelghani Mzoudi was acquitted by a German court because the US refused to allow Ramzi bin al-Shibh, a suspected ringleader of the 9/11 plot who was in US custody, to testify. More such instances could impede actions to lock up terrorists, whether in the US or abroad, or result in the release of suspects. (S//NF)”

ALTZAR: Now, why, do you suppose did “the US refuse to allow Ramzi bin al-Shibh, a suspected ringleader of the 9/11 plot who was in US custody (in Guantanamo Bay prison), to testify?” Could it be that Ramzi’s testimony could embarrass some American or other “friendly” government’s officials?

PENTAGON ADMITS A “MEA CULPA:” CAR FULL OF IRAQI WOMEN AND CHILDREN WIPED OUT BY AN AMERICAN A-10 PILOT 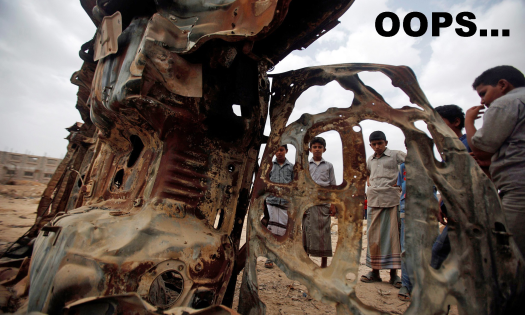 As if killing scores of Doctors Without Borders medical staff and patients at their Afghanistan hospital was not enough (see AMERICA IS AT WAR WITH THE WORLD, PART IV: “J’ACCUSE…!”), the Pentagon has now fessed up about another killing of innocent civilians in Iraq. Here’s an excerpt about it from a Guardian Nov 18 report:

“One such source of realism has been the Pentagon, which quietly released a report on Friday detailing the latest deaths of Iraqi civilians in one of its many airstrikes against Isis. Coming just hours after Clinton called for a stepped-up air campaign and greater use of US special forces in Iraq and Syria, it made for sobering reading.

As a car full of women and children fled the captured Iraqi city of Mosul for the relative security of Baghdad this March, it was stopped at an Isis checkpoint – only to be targeted by American A-10 pilot who wrongly assumed the long delay was suspicious.

The rare admission of error from the Pentagon nonetheless excuses the pilot by claiming four civilian passengers revealed themselves only six seconds before the rounds hit and one – chillingly described as having a “signature smaller than the other persons” – was seen on camera just one second before the air onslaught began.”

ALTZAR: And yet, despite ample evidence that military responses to terrorism will only make things worse for the U.S. and the West – by allowing ISIS and Al Qaeda to use them as recruitment tools to sign up more martyrs – “when Hollande visits the White House on Tuesday, he (the French president) is expected to press Obama for more urgent action,” the Guardian reports.

Just how idiotic can these New World leaders be? Don’t they know that the “definition of insanity is doing the same things over and over again while expecting a different outcome?”

CONGRESSWOMAN GABBARD: U.S. IS FIGHTING AN ILLEGAL WAR IN SYRIA

US Congresswoman from Hawaii, a war veteran herself, Introduces Bill To Stop “Illegal” War On Assad; Says CIA Ops Must Stop –

In a remarkably candid interview with Wolf Blitzer of CNN, Gabbard calls Washington’s effort to oust Assad “counterproductive” and “illegal” before taking it a step further and accusing the CIA of arming the very same terrorists who The White House insists are “sworn enemies.”

In short, Gabbard all but tells the American public that the government is lying to them and may end up inadvertently starting “World War III.”

For those who missed it, here’s the clip: https://youtu.be/IHkher6ceaA [VIDEO] 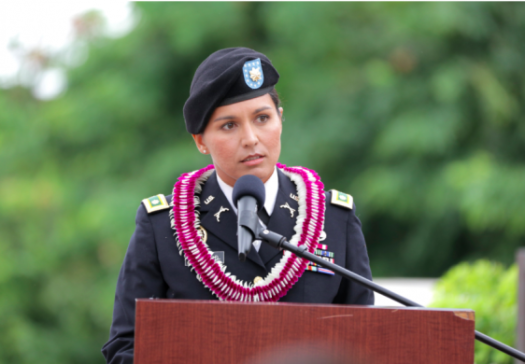 ALTZAR: Everything Congresswoman Gabbard (D, HI) said in this interview makes perfect sense, especially that the Obama administration is waging an illegal war in Syria, and that arming our enemies (Al Qaeda etc) makes no sense. So why are we not seeing this and her new bill as headline news in the U.S?