The UNGA Third Committee overwhelmingly passed a Russian-introduced resolution on combating the glorification of Nazism. The US did not break with its annual tradition of saying ‘no’ during the symbolic vote. Ukraine also voted against.

The Moscow-drafted resolution against whitewashing and attempting to glorify Nazi ideology was approved by a majority in the United Nations General Assembly (UNGA) human right committee on November 16. The resolution, introduced each year, was supported by 125 delegations, 51 states abstained, and the only countries opposed were the US and Ukraine.

DJURDJEVIC: The real news in this year’s anti-Nazism jostling is that, for the first time, Canada has abandoned the US bandwagon. Three years ago, the Truth in Media published a story about the then UN vote on the same Russian resolution. Back then, three countries voted against it – US, Ukraine and Canada (see the Truth in Media story below)

US, AND UKRAINE REFUSE TO CONDEMN NAZISM AND FASCISM IN UN VOTE

THE ONLY THREE COUNTRIES IN THE WORLD TO DO SO

I know, I know… It is pretty hard to believe that the United States, which once stood out as a beacon of freedom, a country that lost over 400,000 soldiers in WW II fighting nazism and fascism, is now fostering and supporting such evil forces.  Ditto re. Canada.

When I first saw this story, I thought it was a hoax. I could not believe it. Yet, if you check the links below, you will see that the story is sadly true. How low has this country sunk.

As an American, I hang my head in shame.

Our nation’s complacency and indifference has allowed a bunch of hooligans to take over the government and usurp our and other peoples’ liberties.

They have trampled upon our Constitution just like the Nazis did in Germany in the 1930s.

“In March 1933, the Enabling Act, an amendment to the Weimar Constitution, passed in the Reichstag by a vote of 444 to 94. This amendment allowed Hitler and his cabinet to pass laws—even laws that violated the constitution—without the consent of the president or the Reichstag” (see Wikipedia).

Sound familiar? Just think of how many times and in how many ways Obama and Bush have violated the US Constitution in the last 14 years. The Constitution has become a virtual dead letter, a museum piece.

As one Truth in Media reader wrote to me today, “the very principles of our founding are now called extreme, while fascism to it’s very core is widely excepted. Basically we are no longer a Republic, and headed down the very same path as Germany before WW II…”

Of course, the Truth in Media has pointed out these frightening similarities before. The last time we did it earlier this month in a piece about “Putin the appeaser” (see IS PUTIN NAIVE OR COY? – NOV 3, 2014). But now have it in black and white after the Nov 21 UN vote. Or should I say in black, white and read?

Check out our WHY “DRANG NACH OSTEN” II?, MARCH 10, 2014, editorial, from which this collage comes showing some of the US officials who supported the neo-Nazis in Ukraine.

The text of the UN resolution against which US, Canada and Ukraine voted called for “combating glorification of Nazism, neo-nazism and other practices that contribute to fuelling contemporary forms of racism, racial discrimination, xenophobia and related intolerance.”

In the UN General Assembly, 115 countries voted FOR the resolution, 55 abstained, most of them US vassals, such as the EU countries. Only three voted against.

Why? Because Russia, a country that lost 27 million of its citizens fighting nazism, sponsored the revolution.

And not a word about this travesty in the mainstream US or EU media!

UN VOTE AGAINST NAZISM BRINGS TOGETHER SOME UNLIKELY BEDFELLOWS

I have highlighted some of these unlikely bedfellows in Green on the UN voting roster (below).

Here’s the official Nov 21, 2014 tally of votes on that UN Resolution. I have also highlighted on it the 55 Washington vassals in Yellow (A – for Abstentions). The three No (pro-Nazism) votes are in Red. 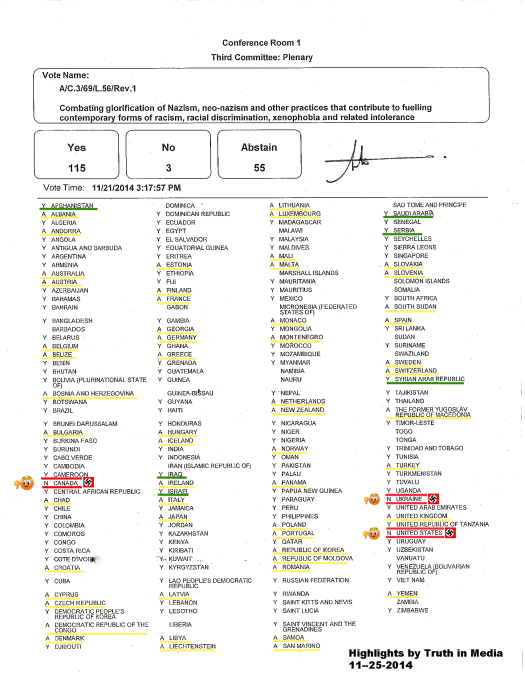 Check out the above story as well as the related one…

2 Replies to “US, UKRAINE REFUSE TO CONDEMN NAZISM/FASCISM IN UN VOTE”