TRUTH IS THE FIRST CASUALTY OF WAR*

US Government Playing with Fire

Remember the non-existent “weapons of mass destruction” in Iraq? The lie was an excuse for Bush “W” to launch another war.

Remember the civilian massacres in Sarajevo? The self-inflicted crimes by the Bosnian Muslims were used as an excuse for NATO (US) to bomb the Bosnian Serbs, and to eventually occupy that former Yugoslav state.

Remember the Gulf of Tonkin incident in 1964? The ruse was  Johnson’s cover story for expanding the Vietnam war.

Remember the Gleiwitz incident in Poland in 1939? This Himmler deception was Hitler’s excuse to attack Poland. Which led to WW II.

So that’s the level to which American government has now stooped. Again.

Check out this scrubbed story in a major British daily published Jan 29, 2013 shows that “US Backed Plan for Chemical Weapon Attack in Syria to Be Blamed on Assad”.

The piece has been preserved in the web archives before the paper deleted it from its web site.

Now, the reason Hitler’s attack on Poland evolved into a world war was that Poland and Britain had a Mutual Assistance Treaty. Once Britain entered the war, the flames spread around the world like wildfire. After Pearl Harbor, nearly entire planet was engulfed in it.

We are in a similar situation today. Only worse. Because Russia can just as easily incinerate America as the Washington bullies can do that to Syria or  Russia. Why Russia?

Because Russia has long been a firm backer of the Assad regime. On Sunday, the world’s largest country warned the U.S.  not to turn Syria into another Iraq. Russian Foreign Minister Sergei Lavrov said Monday any intervention in Syria without a Security Council resolution would be a grave violation of international law, according to Reuters.

*NOTE: US Senator Hiram Warren Johnson said in 1918: “The first casualty when war comes is truth”” 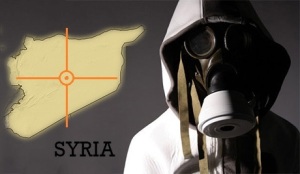 The containers showed markings indicating that the antidote was produced by an unnamed Qatari-German firm. Earlier state television reported the discovery in the Jobar suburb of several barrels reportedly containing war chemicals allegedly made in Saudi Arabia.

The Syrian state news agency SANA insists the rebels used chemical weapons against government soldiers several of whom were rushed to a local hospital.

One Reply to “TRUTH IS THE FIRST CASUALTY OF WAR”