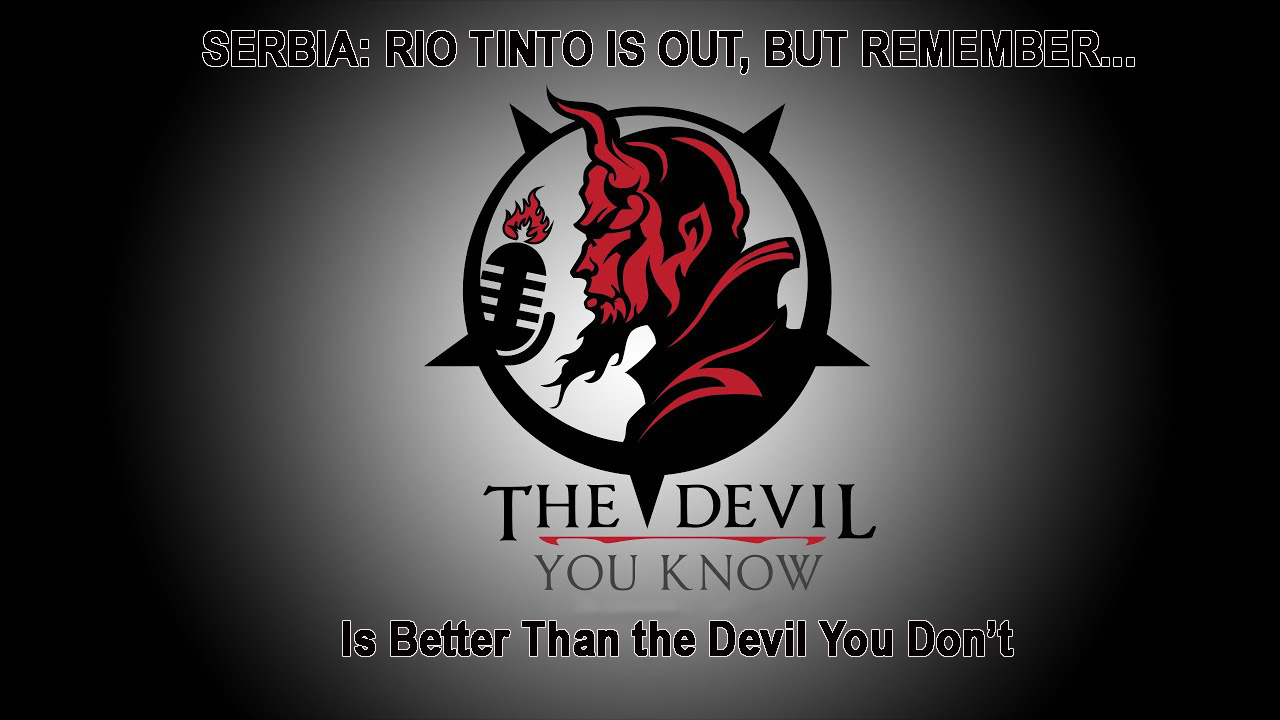 RARE VICTORY OF PEOPLE OVER GOVERNMENT? BUT BEWARE OF THE DEVIL YOU DON’T KNOW Every once in a while there is some good news that warms the cockles of one's heart. It is very rare these days anywhere in the world to see that democracy actually words in fact and nor just in word. But this morning's headline news was an apparent victory of the Serbian people over their government. In short, the Serbian people must be mindful of that old saw - "the devil you know is better than the devil you don't." By forging a tight relationship with China, Serbia may once again find itself in a crossfire of an economic, if not a shooting, war between the West and China.

Rio Tinto has been waging war on nature for a century and a half If one were to describe succinctly what kind of business Rio Tinto is in, it would be DESTRUCTION OF NATURE. War on people, war on animals, war on trees and shrubs. Why? So Rio Tinto would turn a profit off the minerals they dig up – copper, silver, gold, diamonds, uranium… and now the almighty LITHIUM. Nature be damned. And now, Serbia is offering its Jadar region as the next rape victim.

ON THIS DAY IN 2016… OCT 24 MY ELECTION FORECAST: TRUMP TO WIN ON NOV 8! One year later, I can only add one word: “REGRETTABLY”  — One year ago today (Oct 24, 2016), Hillary looked invincible. With two weeks to go, “most polls project Hillary Clinton will thump Donald Trump on Nov. 8….” opined both the national and local pollsters. …

END_OF_DOCUMENT_TOKEN_TO_BE_REPLACED

From My Dreamtime Diary: A Stunning US Election Prediction in Three Dreams over Four Days of This Month (Oct 16-19) Like Saint Patrick in Ireland, Donald Trump and the American people will drive away from America the New World Order snakes on Nov 8, 2016 THE LEGEND OF SAINT PATRICK The snake was the symbol of …

END_OF_DOCUMENT_TOKEN_TO_BE_REPLACED

SAN BERNARDINO: THE LATEST "FALSE FLAG" OPERATION When I wrote the editorial "Selling Feat to Buy Subservience" in May of this year, I did not expect it to be just the Part 1 of an extended series (see MAFIA TACTICS LEAD TO NEW RESTRICTIVE LAWS IN CANADA, FRANCE, BRITAIN, AUSTRALIA... LIKE THE PATRIOT ACT IN THE U.S., May …

END_OF_DOCUMENT_TOKEN_TO_BE_REPLACED

FBI deployed mass tracking devices (cameras) across US that could record up to 1,800 license plates a minute, according to internal documents obtained by the ACLU, says London Guardian ...And So Did the DEA As usual these days, one has to read the foreign press to find out what's happening in our country. Just like …

END_OF_DOCUMENT_TOKEN_TO_BE_REPLACED

MAFIA TACTICS LEAD TO NEW RESTRICTIVE LAWS IN CANADA, FRANCE, BRITAIN, AUSTRALIA... LIKE THE PATRIOT ACT IN THE U.S. SAME PATTERN, SAMO "MO", SAME PROPAGANDA, SAME GOALS IN ALL THESE COUNTRIES NEW WORLD ORDER"S FALSE FLAG ATTACKS IN ALLIED COUNTRIES BOND THEM TO US/BRITAIN IN POLICE STATE TERROR TACTICS In a scene from the 1920s, a new Sicilian immigrant, the future …

END_OF_DOCUMENT_TOKEN_TO_BE_REPLACED

LIKE CANADA, LIKE AUSTRALIA... ANOTHER HOAX? SAME PATTERN, SAMO "MO", SAME PROPAGANDA, SAME GOALD IN BOTH COUNTRIES NEW WORLD ORDER STAGING "MADE FOR TV" TERROR SHOWS IN FORMER BRITISH COMMONWEALTH COUNTRIES, BONDING THEM TO US/BRITAIN IN POLICE TERRORISM If three people had not died in the police siege of a chocolate shop in Sydney, Australia, the "terror" …