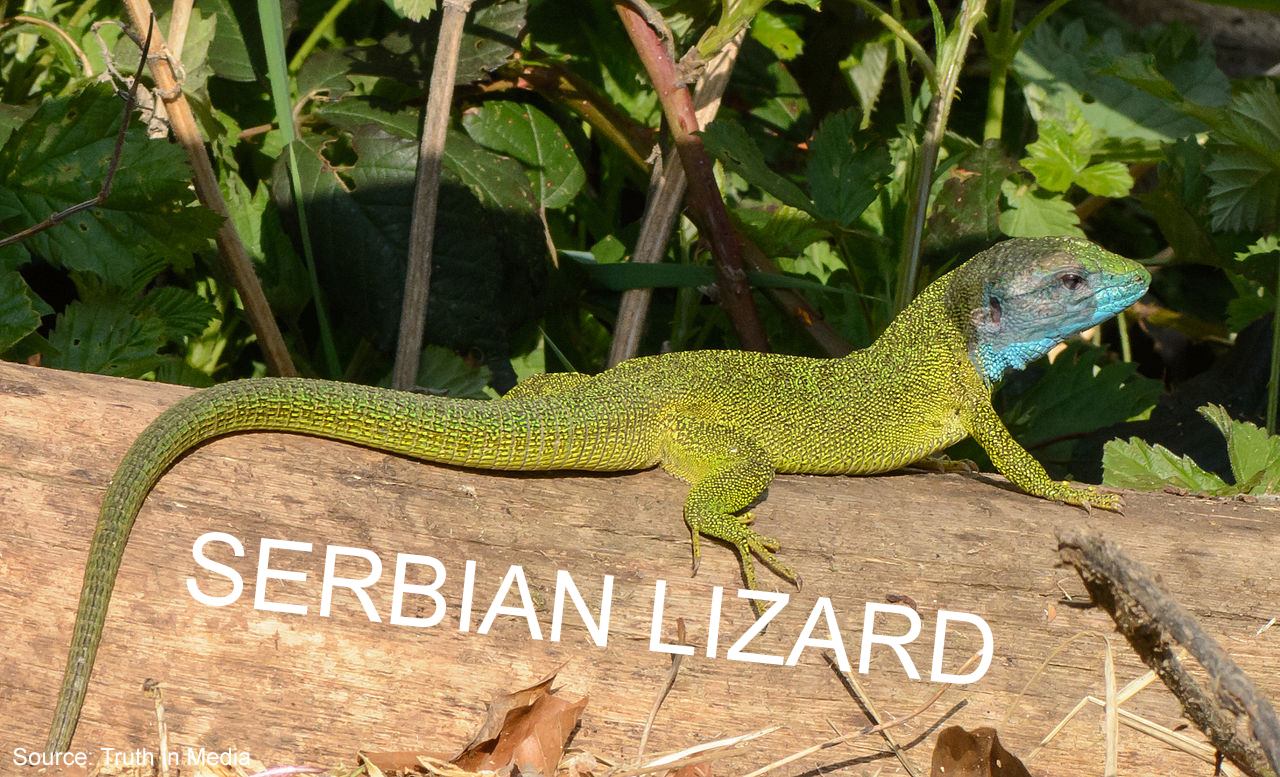 Most lizards are chameleons – they change color to adapt to the environment around them. The green forest lizard is spineless. So is apparently Serbia’s president – a spineless chameleon lizard.

On Thursday, the UN General Assembly voted to suspend Russia from the organization’s human rights panel. Serbia was among the 93 member states that backed the suspension. That’s barely more than 50% of the UN membership. Twenty four countries voted against (China, Iran, Bolivia, Syria… among them). Fifty eight countries abstained (India, Saudi Arabia, Singapore, Egypt, Malaysia, Jordan, UAE… among them).

Why did Serbia vote for expulsion of Russia, its traditional friend and ally? Serbia’s president Aleksandar Vucic claims he was blackmailed by the US and the EU.

“Our initial decision was to abstain, but then we were subjected to countless and difficult pressure,” Vucic told RTS TV on Thursday.

“They said – do you know that a decision is being made whether Serbia will be exempted from the package of sanctions on [Russian] oil, and whether it will be able to import oil after May 15?”

So this 6’6″ (198 cm) giant of a man put his tail between his legs and joined the harem of Washington’s EU whores (as did Montenegro, Bosnia, N. Macedonia – the already proven US vassals in the Balkans). Yet only four days ago Russia’s president Putin phoned Vucic to congratulate him on his re-election. Did Putin think he was calling a friend?

Back in late February, Vucic lamented that 80% of the Serbian media were pro-Russian. We opined that he would probably turn against Russia after the elections. Which he has now done.

Or was that the plan all along? The US/EU decided to hold the fire and postpone their blackmail until after he was safely back in his seat as president again? As an obedient lapdog.

BETWEEN A ROCK AND A HARD PLACE

To be sure, Vucic (and Serbia) find themselves between a rock and a hard place. Which is a consequence of decades-long appeasement toward the US and the EU. First they lost access to the sea when Montenegro separated and later joined the NATO. Then they lost the cradle of their civilization when Kosovo declared independence in 2008.

That left Serbia a land-locked country surrounded by NATO member-states. All the while, the EU and NATO dangled a membership carrot but never really meant it. Why would they. Once you get someone’s testicles in a vice you’ve basically neutered it.

Before Feb 24, Serbia had friendly relations with both Russia and China – both geopolitical strategic enemies of Washington. But Vucic has neither sought nor received security guarantees from either superpower. Furthermore, they are far away and have no strategic interest in defending Serbia.

Before Feb 24, it was possible for Vucic to try to play a neutral role between the world superpowers. Tito did that for decades while swinging between the two enemies in the Cold War. But that is no longer possible. Once a cold war becomes a shooting war and the the world gets polarized, one has to choose sides.

So Vucic had two options:

He has done neither. He just folded his cards and gave up. Which is what spineless leaders do. Or should I have said lizards? Or traitors, as some in the opposition are calling him now.

As a result, a pro-Russian protest is already being planned in Belgrade for next weekend. Might this be another March 27, 1941 (“Bolje rat, nego pakt” – better war than treaty) demonstration? That’s when Belgrade citizens refused to honor their leaders’ pact with Hitler and overturned the government. Which led to a war with Germany 10 days later.

Personally, I doubt it. I don’t think that this generation of Serbs has the stomach for something like that. Nor the stamina to back it up with a self-sacrifice.

That means Serbia will slowly sink into oblivion as a small country with a big heart and heroic history which can now only hope to become the wife #28 or #31 in Washington’s EU/NATO harem. And may not even get in.

For, “an appeaser is one who feeds a crocodile—hoping it will eat him last.” Sir Winston Churchill, Reader’s Digest, December 1954.

For more on European geopolitical evolutions, check out these Truth in Media articles from a quarter century ago:

The preceding paragraph was published in 1998, as a lead to my column A BEAR IN SHEEP’S CLOTHING (1998), which appeared in the Chronicles magazine of Chicago as well as in Truth in Media that year.

“New sanctions on Russia, announced today (Apr 26, 2014) by the G-7 countries, a part of the Obama “All Bluster, No Muster”-Ukraine policy, are inherently anti-European. They cannot hurt Russia without hurting Europe first and foremost.”

“European banks and businesses are far more exposed to the Russian economy than are their American counterparts. Fourteen-fold more, to be exact. Trade between the European Union and Russia amounted to almost $370 billion in 2012, while United States trade with Russia was a paltry $26 billion that year, according to today’s story in the New York Times.”

The preceding paragraph was published eight years ago as a lead to my column EUROPE: ALL PAIN, NO GAIN (Apr 2014).

Which is why we should revisit our warning from that 1998 article:

“Now take all six globalist bear claws together – build-up of the EU bureaucracy, the “euro,” the “Y2K,” the two “enlargements,” plus the “immigration” – ripping and gripping Europe SIMULTANEOUSLY! Only the devil himself could have devised such a way to “help” Europe.”

As you can see, “the more things change, the more they stay the same” [“plus ça change, plus c’est la même chose”], as Jean-Baptiste Alphonse Karr wrote in 1849.

Clinton, Bush, Obama, Biden… they are all merely actors in a drama whose scenario was written long ago, riding the same cow (Europe) to keep the tensions high and the wars going on the Old Continent.

The New World Order “elite,” the playwrights, need the wars to keep up their dominance and oppression. Thus, “perpetual war for perpetual commerce” is their motto, we noted in the early 1990s. Not, “world peace through world trade,” as they profess.

As in any scenario, to create conflicts, they need the villains. We have been saying all along that Russia was and is their Bogey No. 1, even when they talked about the “Partnership for Peace” in the 1990s. The gullible and corrupt Yeltsin swallowed that promise line, hook and sinker. As did Putin, too, in the early days of his presidency (see IS PUTIN NAIVE OR COY?, 2014).

But no more. Now he drew a line in the mud – somewhere on the border between Poland and Ukraine.

Thus back to our 1998 article’s conclusion:

If the globalists’ “thesis” is a centralized, integrated European Union, and it is; then the “antithesis,” resulting from a popular backlash against this devil’s plan, may be Europe Undone, i.e., a disintegration of Europe.

As Winston Churchill noted about Europe and Hitler, the appeasers are merely “hoping that the crocodile will eat them last.”

That’s what the European leaders have been doing for the last three decades.