Except for my musical/ballet creation Chopiniada, which coincided with the Winter Olympics in Korea, I have refrained from commenting on this thoroughly corrupt event. Because these shamefully politicized and commercialized “games” are not worth even a comment. They only deserve our scorn and oblivion.

I never watched any of it on live TV.  We don’t watch any network TV and have not had it for years. I only followed them through online media headlines here and there.

But there was at least one bright light worth a comment – the 15-year old Russian figure skating Olympic champion.

As you can see in this interview, the 15-year old Alena sounds smarter and more mature than most 30-year olds or older anywhere in the world these days.

​
Here’s also a transcript of the interview:

Russian figure skating star Alina Zagitova, in an exclusive interview after her PyeongChang triumph, tells RT she hasn’t yet fully realized she’s an Olympic champion and that she plans to delight her fans for many more seasons.

RT: Alina, thank you very much for this opportunity, it is a great honor. You’re 15 and you’re an Olympic champion. Honestly, what’s on your mind?

Alina Zagitova: The most important thing to me has been to just make sure that everyone, my coaches, the audience and myself are satisfied. What’s on my mind? I’m thinking about the next season, and new tournaments. I’m thinking of some things that maybe I should change.

RT: And that’s all? So, you’re thinking about figure skating and nothing else?

AZ: Right now, I just can’t think of other things.

RT: Do you feel ok when people talk about your age? Because this is something everyone is really emphatic about, but my understanding is that you get the same treatment as everyone else when training and you train just like your teammates who are older, is that right?

AZ: Yes, we all get the same treatment, the same requirements, and coaches give everyone absolutely the same amount of work and attention – to myself, to Evgenia [Medvedeva] and others.

RT: And what do you think of it? Because, as reporters, we can’t help asking this question – because you are our youngest Olympic champion, you’re only 15. Does it sound ok to you when people say “only 15?” 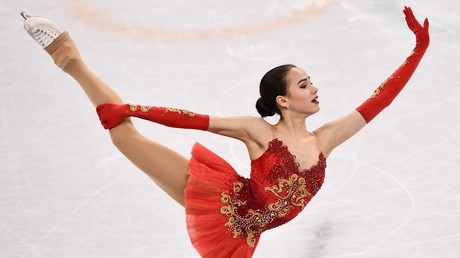 I want to keep figure skating as long as I can’

RT: Cool then. Let me ask you how you were prepping for the Olympics, because, if I understand it right, there have been many cases when – again – a very young age was a factor that led to additional stress in young athletes and affected their performance.

AZ: Well, my strategy now is to just to continue skating very carefully to avoid mistakes, and I want to keep figure skating as long as I can.

RT: And what did you do to help yourself avoid making any mistakes now and win the gold?

AZ: I was very calm. I just tried not to be distracted by the attention from the media and the audience, and not to think much about the fact that this is the Olympics. I tried to think of it as a regular competition, just like any other, that’s the mood I was trying to keep up.

RT: And who taught you how to do this, to stay out of things?

AZ: I just made some conclusions based on my experience, even though it’s not that big yet.

RT: After her performance, Evgenia seemed to have had an emotional reaction – she burst into tears, but then said that she never cries. You, on the other hand, seemed very calm, and, as you said it yourself, had only one tear. What did you do to stay so calm and composed?

AZ: To be honest, I didn’t have any tears, not even one.

AZ: Well, just a little, my eyes welled up a bit. But overall, it’s probably just because of my character; I tend to keep emotions to myself. But when I come back home, I let them all out, and I share it all with my parents.

RT: And what will it be like this time? I can’t even imagine.

AZ: I don’t know yet. I’m still away from home. I’ll probably run and jump around happy. I really hope that by the time I get home it will kick in.

RT: You mean to say that it really hasn’t yet? And you haven’t been running and jumping around? Honestly.

AZ: Only on ice. I did my jumping there.

RT: Oh yeah. So there was nothing like, maybe, back in your room, you just went like “I did it!” or texted someone a happy audio or video message? The people you talk to.

BY HOOK OR BY CROOK

Here’s also a comment the Russian foreign minister Lavrov made during the Winter Olympics (on Feb 18):

LAVROV: Americans apparently can no longer beat us in a fair fight… so they are fighting dirty

The doping scandal that keeps many Russian athletes from competing in top events, including the ongoing Winter Olympics, was just part of the West’s devious strategy against Moscow, Russia’s foreign minister has said.

The assertion came in an interview the minister gave to Rossia-1 news channel, aired on Sunday. Lavrov said in other areas he saw the same approach, “the use of unilateral, coercive, illegitimate, unlawful actions to obtain the advantage.”

Sergey Lavrov said barring dozens of Russians from the games was “part of this unfair competition, because the Americans apparently can no longer beat us in a fair fight. They believe that taking back and preserving uncontested leadership in global sports requires sidelining the competition.”

Lavrov believes that the US and other Western powers are now fighting dirty because they cannot deal with the fact that Russia resurged after a low point in the 1990s, when much of its government was influenced by various foreign advisors pushing the agendas of their native countries. Russia has since realized it was “not a newborn country but a nation with a thousand-year long history” that its citizens should be proud of.

One Reply to “ZAGITOVA: MATURITY AND POISE VS. PETULANCE AND ENVY”