I titled the above report “OBAMA’S (AND SAUDIS’) DIRTY WAR.” That’s because the blatant lying to, and the deception of, the American people happened on Obama’s watch and on his orders (2013-2017). But this is by no means an exception.

I remember covering an almost identical story in the mid-1990s in Bosnia. Only this time the Liar-in-Chief at the White House was Bill Clinton. And the arms were illicitly shipped to the Bosnian Muslims via various circuitous routes, including Saudi Arabia and Argentina.

Some of them even included Iran, a country with which the US has had no diplomatic relations since 1980.

On Apr 5, 1996, the Los Angeles Times revealed that Bill Clinton “directly participated” in a decision to let Iran covertly supply arms to the Bosnian Muslims from early 1994 through January 1996 (yes, even as the American troops were being deployed in Bosnia!?).

And the Argentine newspaper, the Clarin (www.clarin.com), reported in its Oct 2, 1998 edition that illegal arms sales to the Bosnian Muslims via Croatia took place in 1993-1995.

Nor is it just the Democratic presidents who have lied and deceived the American people to cover up their “dirty wars” overseas.

In the 1980s, Ronald Reagan was also caught redhanded using Iranian weapons to arm the Contra rebels in Central America.

Reagan’s VP and successor, George H. Bush, lured Saddam Hussein into invading Kuwait, using it then as a pretext to start the 1st Gulf War. Bush Sr. also helped fuel the wars that destroyed the country of Yugoslavia and brought Islamic Jihad into Europe.

And, of course, George W. Bush’s failed deception about the supposed WMD (Weapons of Mass Destruction) in Saddam Hussein’s Iraq has become legendary. It would be a real spoof were it not for the hundreds of thousands of lives that Bush’s deception had cost, including 4,424 American troops. 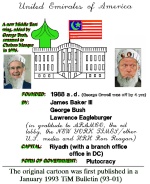 A bombs, seen top left, falls on an Islamic State position in eastern Kobani, during an airstrike by the US led coalition, seen from a hilltop outside Suruc, on the Turkey-Syria border Saturday, Nov. 8, 2014. Kobani, also known as Ayn Arab, and its surrounding areas, has been under assault by extremists of the Islamic State group since mid-September and is being defended by Kurdish fighters. (AP Photo/Vadim Ghirda)

For more, see this Truth in Media 1998 story: https://www.truthinmedia.org/Bulletins/tim98-10-8.html