On this day in 1916, a bomb in San Francisco killed 10 people and wounded 40. It was a start of a legal travesty that took 45 years to unravel (see the ON THIS DAY IN HISTORY…  below).

AND NOW, A STORY BEHIND THAT STORY…

JUSTICE IS NEITHER PERFECT NOR BLIND

It’s a disgrace that the U.S. is in the same league on capital punishment as Saudi Arabia, Iran, China, India and other bloodthirsty societies in Asia and Africa

Over the decades as a war correspondent, geopolitical commentator and a business analyst, I have warned a number of times that Justice is neither perfect nor blind.

Justice is easily corrupted by political, ideological, business, religious or racial interests. That is why I have also spoken out against the capital punishment in this country (for example, see Capital Punishment: Justice or Revenge?, Sep 28, 2000 – http://www.truthinmedia.org/Bulletins2000/tim2000-9-9.html).

As the esteemed 18th-century English jurist, judge and politician Sir William Blackstone put it, “it is better that ten guilty persons escape than that one innocent suffer.”

The above 1916 “Preparedness Day” murder trial is a case in point. While Justice blindly pursued its ideological and political beliefs at the time – that organized labor was behind the bombing – while the terrorist who set off that bomb and killed all those innocent people got away scott free.

Because this 1916 case is not an exception. There are thousands of wrongful convictions happening in the U.S. right now, more than 100 years after that trial.

Samuel Gross, a law professor at the University of Michigan, cataloged 340 exonerations between 1989 and 2003. These exonerations were almost all murder and rape cases, which get much more post-conviction attention, whereas the total number of felonies also includes burglary, car theft, tax fraud, and drug possession.

Some 95 percent of felony convictions are the result of plea bargains, with no formal evidence ever presented, and most never bother with an appeal.

There’s a more rigorous way to crunch the numbers, according to Gross’s new study. And that approach leads to a false conviction rate that was high enough to make one gasp — 4.1 percent.

Gross and his colleagues calculated a 4.1 percent error rate among people who are sentenced to death. This is a small subset (less than 0.1 percent) of the total number of prison sentences but, because of the stakes, these death row cases are scrutinized far more than most. (see this National Geographic report – https://goo.gl/TF3XW2).

Stop and think about it for a moment. Four out of 100 death row convictions are FALSE! So we are killing innocent people. And even if some are exonerated before being put to death, they incarcerated for years, or even decades, like those two labor defendants from the 1916 trial.

And the U.S. calls itself a “civilized” country? Look at the company we are keeping…

Gross and his colleagues collected data on the 7,482 people who were sentenced to death between 1973 and 2004. Of these, 117 were exonerated, or 1.6 percent. But among these, 107 were exonerated while they were still on death row, whereas only 10 were exonerated after their sentence had been reduced to life in prison.

“This leads to a bizarre situation,” Virginia Hughes writes in the National Geographic . “If you’re on death row and your sentence is reduced to life in prison, you’re suddenly much less likely to be exonerated than someone who stays on death row.”

In short, Justice is not perfect and is never blind. That is why we must not put our blind trust in it. So let us kill the death penalty before we kill more innocent people.

ON THIS DAY IN HISTORY… JULY 22

A bomb at a Preparedness Day parade on Market Street in San Francisco kills 10 people and wounds 40. The bomb was hidden in a suitcase. The parade was organized by the city’s Chamber of Commerce in support of America’s possible entrance into World War I. San Francisco was suffering through severe labor strife at the time, and many suspected that anti-war labor radicals were responsible for the terrorist attack. 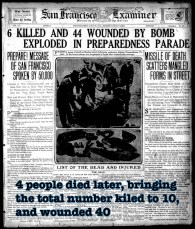 Labor leader Tom Mooney, his wife Rena, his assistant Warren K. Billings, and two others were soon charged by District Attorney Charles Fickert with the bombing. The case attracted international interest because all evidence, with the exception of a handful of questionable witness accounts, seemed to point unquestionably to their innocence.

Even after confessions of perjured testimony were made in the courtroom, the trial continued, and in 1917 Mooney and Billings were convicted of first-degree murder, with Billings sentenced to life imprisonment and Mooney sentenced to hang. The other three defendants were acquitted.

Responding to international outrage at the conviction, President Woodrow Wilson set up a “mediation commission” to investigate the case, and no clear evidence of their guilt was found. In 1918, Mooney’s sentence was commuted to life imprisonment.

During the next two decades, many groups and individuals petitioned California to grant the two men a new trial. By 1939, when evidence of perjury and false testimony at the trial had become overwhelming, newly elected Governor Culbert Olson pardoned Mooney and commuted Billing’s sentence to time served. Billings was not officially pardoned until 1961.