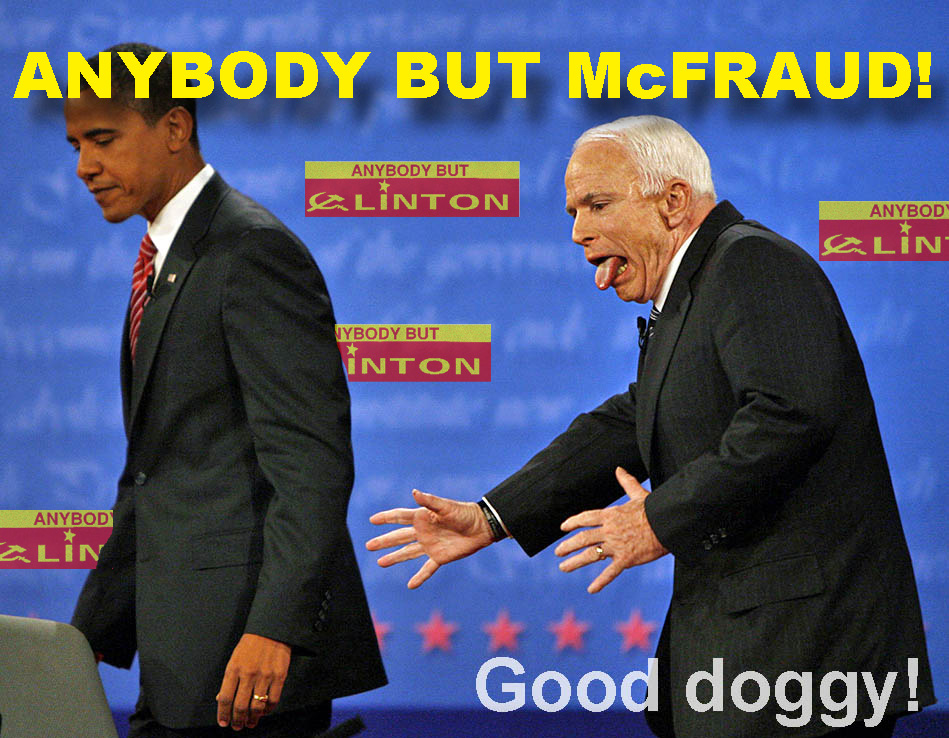 Looks like God is taking matters into His own hands since the Arizona electorate have failed to do so for decades. And God is crossing the party lines, something Senator McCain has been known to do all his political life. For, the same type of brain cancer also killed Ted Kennedy and Joe Biden’s son Beau.

I know, I know… we are supposed to be compassionate about anyone in this situation. And I am trying, though not succeeding very well.

How do you force yourself to feel compassionate about someone who has never showed compassion for anyone else in his entire political life? Only self-centered greed.

How do you feel compassion for a man who has committed fraud and practiced corruption and obsequiousness no matter which president or party was in power?

How do show compassion for a man who had sided with the neo-Nazis in Ukraine, with the Albanian drug dealers and other criminals in Kosovo, with the riff-raff of any kind or religion as long as they gave him money?

How do you show compassion for someone who has taken favors from Charles Keating, only to dump his generous sponsor like excess baggage once Keating got in trouble with the law? (see John McCain: The Most Reprehensible of the Keating Five – http://www.phoenixnewtimes.com/news/mccain-the-most-reprehensible-of-the-keating-five-6431838 – Nov 29, 1989).

How do you show compassion for a man who has married money so he can get more money?

How do you show compassion for a man who has built his entire political career on a lie – that he was a “war hero?” 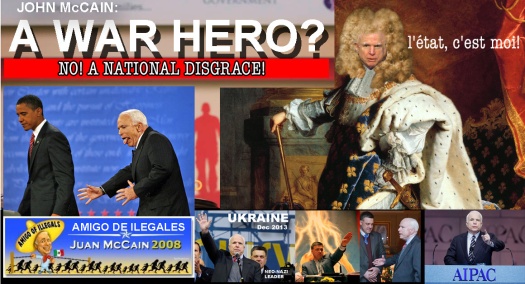 MEETING MCCAIN IN PERSON AT HIS WASHINGTON OFFICE

I know, I know… as Christians, we must try to forgive, though we are not required to forget. And I will never forget a meeting I had with John McCain at his office in Washington, DC, in late 1989, right after the news of his role in the Keating Five broke.

I had set up the meeting before I knew that so I could ask him to help with my work in Eastern Europe, seeing a chance to bring democracy to Yugoslavia, my birth country.

Shortly before out Washington meeting, the Berlin Wall had fallen. Eastern Europe was starting to shed its communist chains.  The doors were opening up. And I was hoping to walk through them as a businessman returning to his native country for the first time after 20 years of voluntary exile.

But after I saw that Keating Five story, I merely told him, “I think that Eastern Europe can do without such examples of ‘democracy’.” And then I walked out.

Perhaps the only genuine compassion I can muster is for the Arizona voters. Our state’s power brokers have obviously had us by our you-know-what’s for all these decades.

God willing, we may be soon free of this national and global embarrassment for our state.(for more, see… ANYBODY BUT A DEMOCRAT OR A REPUBLICAN, https://truthinmedia.net/2015/07/24/anybody-but-a-democrat-or-a-republican/).

Let us hope that we don’t stop there, and that we keep turfing out all of those who have been keeping the likes of McCain in power for decades. Evidently, we seem to have God on our side.

ONCE A “FRAUD HERO” ALWAYS A FRAUD HERO

Check out these two photos… and you can see how “fake news” used to be created back in 1973. Not much different from today, actually.

Look at the crutches that John McCain used to launch his “fraud hero” career.

RT is watched by over 100 million people weekly, 35 million daily

Ever since the major American media had completely prostituted themselves and had become heralds of the New World Order news and views, the Truth in Media editor has been getting his best independent information from RT.COM. In fact, in early 2016, I made the RT.COM my home page.

I now only pay attention to the US lamestream media stories the way I used to in the 1970s and 1980s with regard to the Soviet propaganda – when I want to see a contrarian, censored views, carefully packaged for the dumbed-down masses.

Evidently, I am not alone. Millions of Americans have done the same, just like many Russians listened to Voice of America during the Cold War for the truth about their country.

RT is now watched by over 100 million people weekly, 35 million daily. So it’s much harder now for our lamestream media to pull the wool over the people’s eyes and sell them their lies.

BURIED DEEP INSIDE DEFENSE BUDGET IS A JAB AT RT

Buried deep inside the just-passed defense budget is a small amendment, which could lead to a ban on broadcasting RT in America. The architects of the provision, Senators Graham and McCain, may recall that in their youth such practices formed what was known as the ‘Iron Curtain’.

The National Defense Authorization Act (NDAA) for the fiscal year 2018, which was passed by the US Senate earlier this week, is stuffed with provisions that have little to do with US national defense. This is a tactic that US lawmakers have traditionally used to ‘piggy-back’ legislation which would have little hope of adoption as a stand-alone bill.

Deep down the list of amendments is No 1096, which aims to “prohibit multichannel video programming distributors from being required to carry certain video content that is owned or controlled by the Government of the Russian Federation”.

Proposed by Senator Lindsey Graham (R-South Carolina) and co-sponsored by Sen. Sheldon Whitehouse (D-Rhode Island), the amendment was submitted by John McCain (R-Arizona), a fellow foreign policy hawk. The provision says a distributor working in a US jurisdiction “may not be directly or indirectly required” to carry video content that is “is owned, controlled, or financed (in whole or in part) by the Government of the Russian Federation.”

FREEDOM OF SPEECH IS NO LONGER PROTECTED

In plain English then, any contract RT currently has or will have with American cable and satellite networks to carry its programming will no longer be protected by US federal law after this amendment is signed into law by President Donald Trump. The channel’s current arrangements with carriers made it illegal for them to arbitrarily drop RT’s programming (unless the content shown was obscene) but now they will apparently be able to discriminate against it should they so wish.

The discussion on how the US could insulate its population from RT was sparked by a declassified US intelligence community report on alleged Russian meddling in the 2016 presidential election, which put this channel in the spotlight. The report asserted that RT was a primary tool of such interference, done through critical reporting on US foreign policy and domestic problems. Despite the report containing factual errors and no evidence, it was taken at face value by many US media outlets and politicians.

“The fact of the matter is that John McCain and Lindsey Graham, the people behind this amendment, the Atlantic Council and the others that are trying to silence RT – they are the totalitarians, they are the enemies of free speech, the enemies of the First Amendment.”

The move seems to resemble the strategy of the Soviet government, which strictly controlled domestic media and suppressed radio broadcasts from Europe to insulate the population of the country from ideas and narratives it deemed unfit. The censorship system, dubbed the “Iron Curtain”, backfired and became a major factor in eroding the Communist Party’s control, for the simple reason that people perceived media sources which the government tried to silence as more trustworthy than those it allowed.

2 Replies to “SAY FAREWELL TO OUR “FRAUD HERO””