I just got off the Skype with my sister who is currently at their vacation home in Krasici, Montenegro.

“It is terrible, the stink, the heat, the smoke…” she said. “We have not been able to sleep at our home for two nights now.”

Luckily, they had good friends in the nearby town of Tivat, which is farther away from the fires, who put them up at their home for two nights.

“What about NATO?” I said. “Where are they now when Montenegro needs them?”

“I know,” my sister replied. “That’s what a lot of people here are saying. They are embittered and angry both at the EU and NATO. They sent a request for help to Brusseles, two days ago, and the bureaucrats are still ‘considering it’.”

Montenegro government recently became the latest NATO member, betraying its own Serbian population and Serbia, with which it had been united and thus also a target of the NATO bombing in 1999.

Here are some images a friend of mine, Rada Kovilic, who is currently on Lustica peninsula in Montenegro, posted on her Facebook page, along with some BBC news photos. 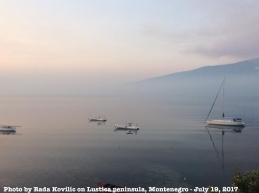 Which brings back a memory of something that happened actually on this day, July 19, 1,953 years ago not far from Montenegro and Croatia which are burning today.

Legend has it that Roman Emperor Nero fiddled (or played a lyre in another version) while Rome burned. The year was 64 AD. Thee fire started on July 19 – yes, on this very day 1,953 years ago! The fires raged on for six days destroying 70% of the Roman empire’s capital.

It would appear the tragic scenario is being repeated again today, only on the other side of the Adriatic. Raging brush and forest fires in Montenegro and Croatia and devastating the landscape, ruining vacations in the high tourist season, and forcing evacuations (see this BBC report – http://www.bbc.com/news/world-europe-40642342).

And once again, just like the insensitive ruler of Rome nearly two millennia ago, the leaders of the EU and NATO are “fiddling” while fires are devastating parts of the Adriatic coast.

UKRAINE SENT SPECIAL ANTONOV “FIREKILLER” AIRPLANE TO SAVE THE DAY

Luckily, not everybody is so indifferent to human suffering and tragedy as are the EU and NATO bureaucrats. You won’t believe who the first country was to react and send tangible help to Montenegro?

Ukraine! Yes, the poor Eastern European country that the EU and NATO are both exploiting and propping up in their antagonism against Russia. My sister told me that Ukraine sent yesterday a big Antonov aircraft which is especially build to fight forest fires like this. Except for refueling and re-watering, the airplane has been flying non-stop for the last 24 hours. And WINNING the war against the FIRES!!

“Tonight is the first night that we can really breathe at our (Krasici) home,” my sister said.

So this will be the first night in three days that they will be able to sleep at home.

She also said that another poor Eastern European country – Bulgaria – had sent several helicopters to fight the fires.  But in the meantime, new fires had broken out near Podgorica, Montenegro’s capital. So the Bulgarian helicopters were diverted to fight those fires, leaving the Ukrainian Antonov to finish the job near Krasici and the Lustica peninsula.