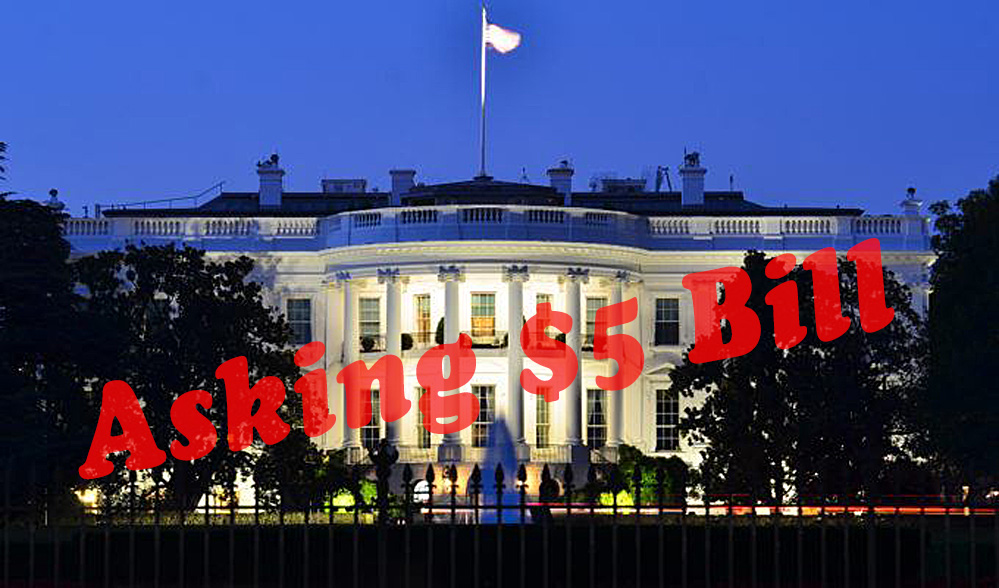 Want to know how long the election campaign lasts in Japan?  Twelve days.  By law. And no paid advertising is allowed.

And in our country? The 2016 election campaign will have lasted 596 days by the time the votes are cast in November. Ted Cruz kicked off on March 23, 2015. 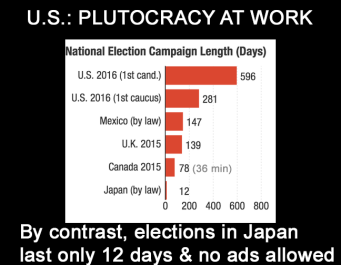 What about other countries?  In Canada, the last election lasted 78 days. In Britain and Mexico 139 and 147 days respectively. And so on…

There is no other country in the world with election campaigns as long and as costly as in the United States.

How costly? Perhaps $5 billion or even more, according to some estimates.

By the time it comes down to just 2 candidates, and those candidates start spending money like it’s their job (in a way it is their job), we will see that number skyrocket. Many believe that the campaign in 2016 will double, triple, or even quadruple the spending in 2012.

Most estimates show that the election in 2016 will cost at least $3 billion; many believe it will cost $5 billion; and some even put the number as high as $10 billion. Read more: How Much Will it Cost to Become President In 2016? | Investopedia).

Prior to the 2016 election which is sure to set new spending records all around, the most expensive election was four years ago (2012). It is estimated that Obama’s sponsors bought the second White House for him for three quarters of a billion dollars, roughly the same as what they paid in 2008. The overall 2012 spending is estimated at $2.6 billion.

This year, Hillary Clinton is poised to smash these records. With the second and the third most popular New World Order establishment candidates out of the race (Jeb Bush and Ted Cruz), Hillary is likely to receive truckloads of money from Wall Street and other corporate and foreign sources in the hopes of defeating Donald Trump (also see  BILLARY CLINTON CASHING IN ON WHITE HOUSE FAME (AND INFAMY) – http://wp.me/p3QU1S-Wu – May 15, 2015).

Speaking of Trump, his $96 million campaign spending so far looks positively puny compared to Hillary’s and other leading candidates’. And yet he is the leader of the pack.

So could 2016 be the first time in more than half century that White House may NOT go to the highest bidder?

Let us hope so. Because if money continues to succeed in buying the White House, what’s the point of voting.

You see, complacency of the American voter during the last half century has allowed the New World Order “elite” to establish PLUTOCRACY in our country (the rule of the few over the many). And the deep-pocketed plutocrats have made sure to raise bar so high that no candidate other than those they buy and send to Washington even has a chance of competing, let alone winning.

This is what I wrote about that nearly 20 years ago:

“Fielding two horses from the same stable evidently suited the U.S. Establishment just fine. Election ’96 was a “demo farce!” The U.S. democracy is turning into a New World Order plutocracy” (an excerpt from my Washington Times column – “DEMO FARCE” AND THE AMERICAN CENTURY, Nov 1996).

Back in August 2012, the TIME magazine cover showed the White House with a real estate FOR SALE sign – Asking $2.5 billion. Make that $5 billion or more this year. 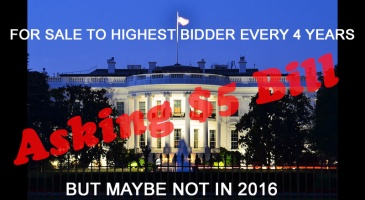 And yet, if my reading of the 2016 election tea leaves is right, even that much money may not be enough to for the New World Order establishment to buy the White House. Thanks to the internet bypass of the corrupt lamestream media, more and more Americans are becoming aware of how we have been duped by the so-called “elite” over all these decades.

More and more of us see Hillary and her financial backers as oppressors of the American people, and as world class criminals who do not hesitate to commit mass murder or start a war in their quest for greed and power.

No wonder that even our corrupt establishment media, like CNN, have been forced to report that, according to the latest poll, Trump is topping Hillary 44% to 39% in a four-way matchup – including Gary Johnson (9%) and Jill Stein (3%) – and by three points in a two-way head-to-head, 48% to 45%.

And the two-way race is only now getting under way.

There is an easy way out of this plutocratic quagmire.  Shorten the election campaign to 90 days maximum, and severely limit the spending for each candidate.

That would ensure a fairly level field for all. And eliminate the possibility for the New World Order “elite” to try to manipulate elections in the future.

Let us hope that Donald Trump as president-elect will make such legislation his highest priority. Because it would open doors to many other smart and talented Americans who are not multi-billionaires like himself. And it would be a sure way to “make America great again” – his campaign slogan.

DUMBING DOWN OF AMERICA III

Proof That DUMBING DOWN OF AMERICA Is Succeeding

Part of that editorial included this image of Hillary’s major donors from Wall Street with a caption: LOOK WHO IS PAYING FOR HILLARY’S ELECTION.

Today, I reposted this piece. And what a difference a year makes. The vast majority of responses I have received so far from the readers was how dumb or stupid the people are who are voting for such a thoroughly corrupt and disgraced candidate, as Hillary Clinton.

One of them, for example, wrote:

“Are the american voters this dumb to ignore all this money theft & corruption?”

And now, here’s the irony, while the rich Wall Street type along with foreign (Saudi) interests are paying for Hillary’s election, the people who are voting for her come from the opposite end of our social strata.

PROFILE OF A HILLARY VOTER

In broad strokes though:

So the rich are paying for Hillary’s election and the lower classes and minorities whose ignorance and labor the rich are exploiting are voting for her.

That’s like voting for your henchmen. Or henchwoman in this case. Can it get dumber than that?

Dumbing Down of America?  You betcha. And here’s a proof of it. 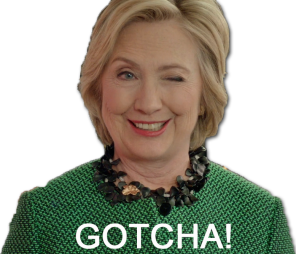