Over the last few evenings, Elizabeth and I have been watching on Netflix the TV series “TURN.” It is about the American Revolution and the brutality of the British rule. The main reason the people rose up was, of course, unfair taxation. Or “taxation without representation,” as it has become known in history.

Keeping that in mind, I said to Elizabeth last night, “and just think… all this struggle and sacrifice for freedom from tax oppression has only led to more tax oppression. It’s just that we are now enslaved by Wall Street and Washington instead of King George III.”

Some 250 years after the British “Stamp Act,” which sparked the American stampeded to freedom, a nation of 319 million grunts and toils under the thumbs of a corrupt Congress and its Wall Street masters.

In 2015, Americans will pay $3.3 trillion in federal taxes and $1.5 trillion in state and local taxes, for a total bill of more than $4.8 trillion, or 31 percent of the nation’s income, according to Tax Foundation. That’s more than this country of 319 million people spends on food, clothing, and housing – combined!

The Tax Foundation has come up with the term “Tax Freedom Day.” Tax Freedom Day is the day when the nation as a whole has earned enough money to pay its total tax bill for the year. This year, Tax Freedom Day falls on April 24, or 114 days into the year.

So we spend the first four months of the year basically working for the government. Which means for Wall Street bankers and other industrialists who benefit from our huge government debt of $21.7 trillion.

In other words, we are once again being subjected to financial slavery.  It’s just out money is now being siphoned off by corrupt domestic politicians and bankers instead of King George III.

Therefore, a more appropriate term for April 24 would be Tax Slavery Parole Day. On that day in 2015, we will be pardoned; released from bondage, having paid off the ransom to our slave masters. After that day, we can finally start working for ourselves. But only till Jan 1. That’s when Wall Street and Washington will place the yoke of tax slavery back on our necks.

No wonder many Americans are starting to hit the streets once again, protesting the heavy tax burdens of our plutocratic system of government. 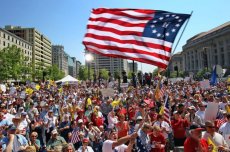 It wasn’t always that way. Here’s what the Truth in Media editor wrote in 1998 in an editorial “Wall Street’s Conquest of America,” which was also published as his Aug 1998 Washington Times column – “When Will the Wall Street Bubble Burst?“:

“Ever since the 16th Amendment, the Wall Street’s “vulture capitalists” have been gradually tightening the noose around Americans’ collective necks.

The income tax, for example, is NOT these plutocrats’ God-given entitlement, as some would have us believe. It was enacted only in 1913, after much debate and treachery, 137 years after this Republic declared its independence from the British crown.”

At the time, the entire U.S. income tax law was 17-pages long. Today, it has grown to over 30,000 pages. More business opportunities for the politicians, lawyers and accountants; more financial tyranny for the taxpayers – the New World Order’s “gladiators.”

For example, even as late as the 1930s, the beginning of the socialist (FDR) era in America, the individuals’ income taxes accounted for only 1.4% of the U.S. GDP. The corporations, on the other hand, bore a bigger 1.6% burden. No longer. In 1990, for example, the respective individual/corporate GDP shares were 8.8% and 2.0% respectively – a six-fold increase for individuals; only a 25% rise for the Princes.

But perhaps the greatest income tax scam was how the FDR (Roosevelt-Democratic) administration and Big Business used World War II to push through a “temporary” wartime emergency legislation. It was a law requiring employers to collect income tax at the source – thus becoming government agents without compensation.

This communist-style legislation turned on its head the American legal principle – “innocent until proven guilty.” It gave the Internal Revenue Service (IRS) the rights which the U.S. Constitution accords a defendant, while putting the burden of proof on the taxpayer, the “plaintiff.” Half a century later, this FDR income tax ruse has given a whole new meaning to the term “temporary.”

times longer than it was a century ago, according to Wolters Kluwer, CCH, which has analyzed the federal tax code since 1913.

Amazingly, in the first 26 years of the federal income tax, the tax code only grew from 400 to 504 pages. Even through President Franklin Roosevelt’s New Deal, the tax code was well under 1,000 pages. Changes during World War II made the length of the tax code balloon to 8,200 pages. Most of the growth in the tax code came in the past 30 years, growing from 26,300 pages in 1984 to nearly three times that length today.

As this writer said 17 years ago, that’s “more business opportunities for the politicians, lawyers and accountants; more financial tyranny for the taxpayers – the New World Order’s ‘gladiators’.”

Now, when we take the state and local taxes into account, we will find the tax burden is not evenly distributed across the 50 states. A few days ago, on Tax Day 2015, Forbes published a ranking of the 50 states by aggregate taxes – federal, state and local.

Want to guess which state was the worst? (i.e., with highest taxes).

In general, the northeastern states had the highest overall tax rates. The southern states tended to have lower tax burdens. The most complicated one is Hawaii, #31 overall, but with 12 different rates for income in different brackets. Yikes!

But the best one was… guess what? Wyoming! Yes, the land of Grand Tetons and the bison. Alaska was #2. South Dakota #3.

Since freedom we still have the freedom to move to another state with lower taxes, perhaps you can use the above map as a guide.

All other things being equal, of course. Which they never are. There are many other considerations besides the taxes when one chooses where to live.

For example, if Hillary Clinton or Jeb Bush were to become president in 2016, no state would be big enough to hole up in from increased government oppression.