Is There Hope for America’s Resurrection?

Read This 2014 Year-end Essay to Find Out the Answer…

Take a good look at the $5-bills above. What do you see that’s different? (the red and green highlights should give you a hint).

A Note That Got JFK Killed

Actions like that Executive Order are what got JFK killed. Fifty years after the shameful betrayal of American freedom by the 1913 Congress which established the Federal Reserve, the young and hugely popular president issued a challenge to the corrupt

What happened in Dallas on Nov 22, 1963 was the banksters’ answer: “No one, especially not a President of the United States, is allowed to challenge our power.”

But the JFK assassination was just the start. Then came the coverup. These ruthless bankers had the power and the means to suppress the truth by silencing any witnesses who might have come forward to testify against them (see Deaths of Witnesses Connected to the assassination of John F. Kennedy).

As a result, nothing was ever proven. Officially, the JFK assassination remains an unsolved murder case. But most Americans know the truth in their gut anyway. The jury of public opinion would have easily convicted the Fed owners of the conspiracy to commit murder.

Because JFK was not the only victim of the ruthless banking mob that took over this country 101 years ago. Only the most famous one.

Oh what a tangled web we weave, when first we practice to deceive! (Sir Walter Scott, Marmion)

THE DEATH OF THE REPUBLIC

The Constitutional Republic created by our Founding Fathers lasted 137 years. It died on Dec 23, 1913 when Congress passed the Federal Reserve Act. The same year the 16th Amendment was enacted which gave Congress the power to collect income taxes and pass our money over to private bankers as interest payments. A one-two punch to American freedom and independence.

The FED’s silent financial coup d’etat was basically carried like this:

The government gave up the power to create money and passed it to the FED banks. They print the money, then loan it back to the government charging interest. The government levies income taxes to pay the interest on the debt.

And that’s it. A bloodless coup d’etat carried out with the help of crooked politicians. The whole country sold into usury. The names Aldrich (Senator who sponsored the Fed bill) and Wilson (the President) forever stained by treachery.

Ever since, the “land of the free” has ceased to exist. All American citizens became financial slaves of the Fed and the private banking cartel who own it.

Our democratic system has been a “Demo Farce,” as this writer noted in this November 1996 Washington Times column “DEMO FARCE AND THE AMERICAN CENTURY.” Only the candidates loyal to the banking cartel were fielded.

Some were issued Blue uniforms and called Democrats. Others wore Red jerseys and called themselves Republicans. But both played for the same club owners – the Fed.

“The 20th was a century which America is leaving less ‘American’ than it was when it started. Instead, it was an industrials-driven ‘Communist Century.’ And, thus a period of REGRESSION of the Homo Sapiens!” (Bob Djurdjevic, WT, Nov 1996)

Any attempts for independent challengers were suppressed, often brutally.

Louis T. McFadden was a Congressman who was an outspoken critic of the Fed in the early 1930. Ultimately, he paid for his attempts to rescue the Republic from the claws of ruthless bankers and return it to its original Constitution.

Here’s what McFadden, said in Congress on June 10, 1932, while serving as the Chairman of the House Banking Committee:

“Mr. Chairman, we have in this country one of the most corrupt institutions the world has ever known. I refer to the Federal Reserve Board and the Federal reserve banks.

This evil institution has impoverished and ruined the people of the United States; has bankrupted itself, and has practically bankrupted our Government. It has done this through the maladministration of that law by which the Federal Reserve Board, and through the corrupt practices of the moneyed vultures who control it.”(http://www.rense.com/general76/jfkvs.htm)

Is There Hope for America’s Resurrection?

In recent presidential elections, occasional challengers to the Fed’s power emerged. None succeeded in their quest for America’s resurrection.

All were successfully neutralized and marginalized by the powers that be who run this country and much of the world, the masters of the so-called New World Order.

No wonder many Americans are flying our flag upside-down, a sign for a vessel in distress.

Now Senator Rand Paul (R-KY), Ron Paul’s son, is considering a presidential run in 2016. His father was quoted as saying in Dec 2013 that he believed his son would run. Rand, the Paul Jr., emerged on the national stage in March 2013 when he staged the longest filibuster in the US Senate history. He droned on for over 12 hours against the use of drones in America.

Is there hope Rand Paul might succeed where his father and several prominent predecessors had failed?

The odds are against him. Not just because of the past failures of independent candidates. Because he would be also trying to work WITHIN a proven corrupt system. And doing the same thing over and over again hoping for a different outcome is actually a definition of insanity:

Insanity: doing the same thing over and over again and expecting different results.

So the answer to the question “is there hope for America’s resurrection?” does not lie in reform of a broken system. As President Eisenhower had said at a moment like this, “I think we have flogged this horse enough. Let’s get a new one.”

Alas, those who hold the reigns of power don’t relinquish them voluntarily. Or peaceably. As the old saying goes…

Democracy is two wolves and a sheep voting on what to have for dinner. Liberty is a well-armed lamb contesting the vote.

And “those who sacrifice liberty for security deserve neither,” history and Benjamin Franklin teach us.

Does that mean it would take another American Revolution?

Not at all. Because any violent man-made revolutions, as history has shown, even if successful rarely last long. So trying that again would be “doing the same thing over and over again hoping for a different outcome.” Which is a definition of insanity, as you saw.

We need a new social order which is based on Love not Greed. And for that to happen, we need Divine help and intervention, perhaps in the form of some cataclysmic event that would sweep away all of the Dark ones from this planet who are propagating and instigating wars.

A WW III or some such EMP variant (Electro Magnetic Pulse attack) might do the trick. The New World Order masters seem to be already working on it by trying to isolate and subdue Russia through their Oil War and Attack on the Ruble. Except they are not figuring on a blowback.

They may be thus sowing the seeds of their own destruction. God willing.

A MESSAGE FROM ASCENDED MASTERS

This is an excerpt from a comment I received in response to this article from a Truth in Media reader and friend in Tennessee. The excerpt comes from a channeling by Sheldan Niddle – http://www.paoweb.com/index.html…

“…We, Ascended Masters, were required to use our envisioning powers to assist you in this grand task. We welcome your increasing acceptance of the many changes needed to transform this reality.

Let us continue to pray and meditate together. A grand design is manifesting in this realm, which is destined to transform us all. We are most pleased by your cooperation. The energy fields have formed, which are to wonderfully forge our new realm. Use this ever-growing energy to bring in your dreams.

We wish you freedom, prosperity, and most of all a return to the individual sovereignty and rights given freely to you. Each human on this world is destined to merge with his or her highest living potential. This resultant Being is to work with others to form a most marvelous new epoch for all humanity. It is this entity which is to join with the Agarthans and others to form a new Galactic Federation star nation….”

HIGHLIGHTS FROM AARON RUSSO’S 2007 INTERVIEW: “There Has to Be an Uprising”

Not everybody agrees with this writer’s conclusion at the end of this essay that, “we need a new social order which is based on Love not Greed. And for that to happen, we need Divine help and intervention, perhaps in the form of some cataclysmic event that would sweep away all of the Dark ones from this planet who are propagating and instigating wars.”

Some political activists are advocating an uprising. Like the late Aaron Russo, an American award-winning movie producer and director who became an outspoken New World Order critic late in life.

Here are some highlights from his interview with Alex Jones taped in 2007: 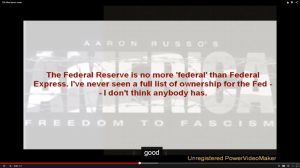 3 Replies to “WHEN DID AMERICA LOSE ITS INDEPENDENCE?”