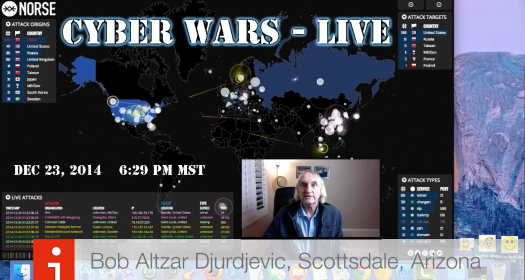 This evening, I stumbled upon the NORSE networks map – http://map.ipviking.com/. It was a fascinating discovery. I was glued to my screen for several minutes, watching

At one point, around 7:33 PM MST, the Chicago area seemed to be under particularly strong attack (Motorola, Boeing?). And then came a barrage of cyber missiles aimed at Seattle (Microsoft, Boeing?).

Over time, it became evident that most attacks were coming from China and the U.S. And most targets were in the U.S. and Russia. North Korea was nowhere on this map. But South Korea, a U.S. protege, was the sixth most active attacker (updated Dec 24, 2014).

The show was too good to miss. So I decided I needed to share it with you.

Here’s now a 3-minute film I made using the “live” screen capture of that cyber missile show, along with the Star Wars soundtrack, so I can share it with you.