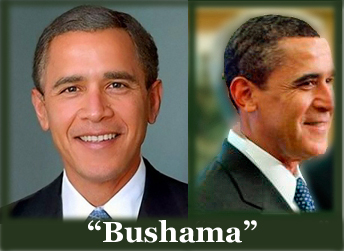 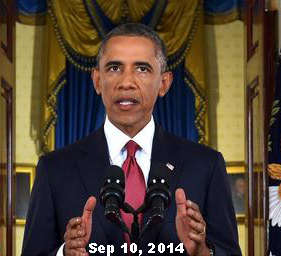 Yet more Americans are dying for lost causes than ever

“Enough is enough!” That’s what any sensible American should say to President Obama upon hearing
his latest claim – Obama to Pledge ‘Relentless Effort’ to Destroy ISIS.

And how many times have the White House occupants duped the American people?

Too many to count, right?  So shame on us!

And now the winner of the 2009 Nobel Peace Prize is showing his true colors (see Masters of Disasters, July 2014). And he is using almost the same rhetoric against ISIS as George W. Bush did in 2001 against Al Qaeda.

“We will direct every resource at our command–every means of diplomacy, every tool of intelligence, every instrument of law enforcement, every financial influence, and every necessary weapon of war–to the destruction and to the defeat of the global terror network.” ( see President Bush Addresses the Nation, Sep 20, 2001)

No wonder we dubbed Obama “Bushama” right after his election in 2008.  Which is when this mocking image was created.

And what did all these threats and warmongering promises get us? More dead Americans, less security at home and abroad, and more government control and intrusion into our lives.

No surprise there.  Because that’s what the New World Order agenda is. Control of the American people (and the world eventually). That’s why they keep inventing new enemies so as to justify “perpetual war for perpetual commerce.”

“Perpetual war for perpetual commerce” is the NWO motto the Truth in Media identified over 15 years ago (see Perpetual War for Perpetual Commerce (1998), Washington’s Crisis Factory (1999), New World Order Flag (1999). Sadly, it is even more true today than it was in the 1990s.

So are you ready to say, “enough is enough?” 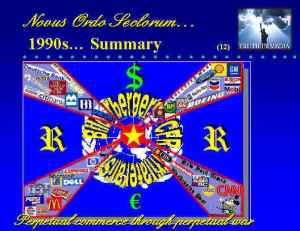 One Reply to “OBAMA PLEDGES “RELENTLESS EFFORT” TO DESTROY ISIS… JUST AS BUSH DID 13 YRS AGO RE. AL QAEDA”