BROKEN “IRON CLAD” US PROMISE: “NOT ONE INCH EASTWARD” (from Berlin Wall)

Ever since the fall of the Soviet Union in 1991, the Truth in Media editorials have been pointing out that Russia continues to be the “Bogey #1” of the New World Order, its “partnership for peace” (during Yeltsin era) and other “friendly” overtures (during Putin’s tenure) notwithstanding.

Rather than attack the world’s biggest country head on, the New World Order has been nibbling at its edges (wars in Chechnya, Georgia, Ukraine, NATO conquests of Bulgaria, Romania, Poland and the 3 Baltic countries), and trying to cripple Russia through plunder (during Yeltsin era) and sanctions (during Putin’s tenure).

Why Moscow believed at all during the last 16 years that you can negotiate with a beast which is bent on devouring you is beyond me. As Winston Churchill once reportedly screamed at one of his advisors, “you don’t negotiate with a tiger when your head is in its jaws” (referring to Hitler’s Germany, of course).

BROKEN “IRON CLAD” US PROMISE: “NOT ONE INCH EASTWARD” (from Berlin Wall)

Nor do you negotiate with proven liars and a crooks. Which is what the successive US governments have shown themselves to be. Here’s just one case in point…

In early February 1990, U.S. leaders made the Soviets an offer. According to transcripts of meetings in Moscow on Feb. 9, 1990, then-Secretary of State James Baker promised that, in exchange for cooperation on East Germany, the U.S. could make “iron-clad guarantees” that NATO would not expand “one inch eastward” (from the Berlin Wall).

Less than a week later, Soviet President Mikhail Gorbachev agreed to begin reunification talks. No formal deal was struck, but from all the evidence, the quid pro quo was clear: Gorbachev acceded to Germany’s western alignment and the U.S. would limit NATO’s expansion.

“Iron clad?” “Not one inch eastward?”

See the Truth in Media Nov 7, 2014 editorial – FALL OF BERLIN WALL FOR NAUGHT AS ANOTHER RISES FARTHER EAST – http://wp.me/p3QU1S-zy

Like a slow-burning fuse snaking its way from Moscow to Donetsk, the two-mile long Russian humanitarian aid convoy could be the spark that starts the real war between Ukraine and Russia (read US/NATO and Russia). It seems that both sides are heading for the cliff of no return. Which appears to be exactly what Washington and its Kiev puppets want.

Having encircled the pro-Russian cities of Donetsk and Luhansk in East Ukraine, the Ukrainian government are now saying they will not allow the Russian humanitarian aid convoy to cross the border. Undaunted, the Russians press on anyway.  And that’s how the wars start.

and in 1999 in Kosovo. One provocation led to another, and with eye-for-an-eye attitude by both sides, boom! Suddenly we are in a shooting war.

Meanwhile, a column of 280 trucks had left from near Moscow two days ago. It is estimated that it would take a couple of days at least for it to make the 1,000 km (620 mile) journey to Ukraine’s eastern regions where rebel fighters seek union with Russia.

Rossiya 24 TV showed a 3-km (2 mile) long line of containers and trucks loaded with crates of water stretched along a road with workers in a light summer wear of shorts and shirts loading sacks of aid. A Russian orthodox priest marched across a line of trucks, spraying them with holy water before they left.

Maybe that’s what the rest of the world should also do at this moment – pray for the Russian and Ukrainian leaders to come to their senses before they allow Washington/NATO warmongers to hurtle us all into another major war.  And for the safety of those truck drivers. They are potentially driving into a metaphorical minefield.

Isn’t it bad enough that we (Americans/NATO) are killing people in Afghanistan and Iraq again? How many more wars will it take before the world realizes that the real Washington slogan is “PERPETUAL WAR FOR PERPETUAL COMMERCE?” (see Parallel Wars: From Boardroom Smiles to Battlefield Tears, Aug 1).

“Obama, stop the slaughter! Everywhere. Or else burn your Nobel Peace Prize on the White House lawn. For, it is a disgrace to stain it with so much human blood.” 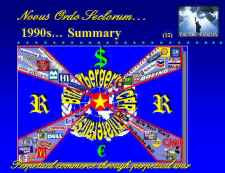 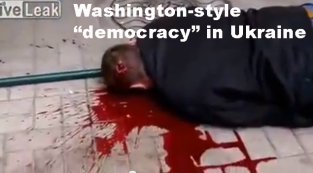