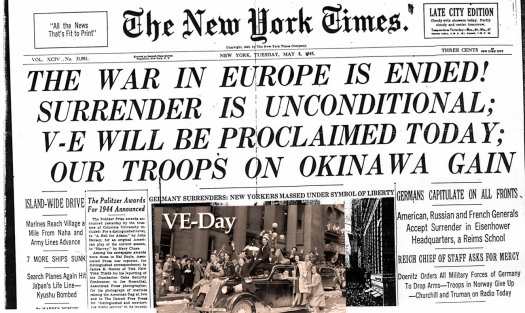 LEST WE FORGET THE 60 MILLION WHO DIED IN WW II

I just scanned the top US media stories. Not a single one mentions this momentous day in the world history. Part of the “Dumbing Down of America,” I suppose. How can people learn from history if nobody teaches them?

Let us not allow “them” to drag us into WW III in blissful ignorance. Let us remember and honor the victims of the past New World Order architects. And all those who have died in the last 69 years in hundreds of wars our greedy and power-hungry “leaders” have launched. They have failed to cash in the Peace Dividend of the VE Day 1945.

Let us pray that such travesties are not repeated. And let us reject violence of any kind for any cause. 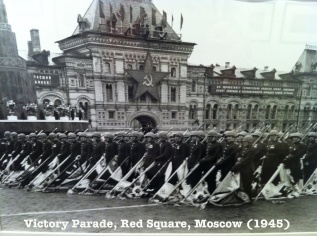 Musical Prayer for Peace on Earth

Here’s a musical Prayer for Peace on Earth – a blend of Bach, Pachelbel and Beatles (Hey Jude) – I have just recorded to mark this solemn day:

Here’s now the audio recording of this musical prayer: 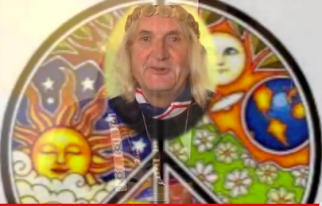 Two days ago, I published this short story about the 69th anniversary of the end of the European portion of World War II (“On This Day 69 Years Ago the World Rejoiced“). I remarked that, upon scanning the top US media headlines, “not a single one mentions this momentous day in the world history.”

Part of the “Dumbing Down of America,” I suppose,” I wondered. “How can people learn from history if nobody teaches them?”

Indeed. Now, take a look at what St Petersburg, Russia, looked like on that day. Young and old poured out into the streets and poured out their hearts out both honoring and grieving for their lost relatives. About 641,000 citizens of St Petersburg alone perished during the 900-day siege of the former Russian imperial capital.

And here’s in part why:

The siege lasted from Sep 8 1941 until Jan 27 1944. The city’s almost 3 million civilians (including about 400,000 children) refused to surrender and endured rapidly increasing hardships in the encircled city. Food and fuel stocks were limited to a mere 1-2 month supply, public transport was not operational and by the winter of 1941-42, there was no heating, no water supply, almost no electricity and very little food. In January 1942, in the depths of an unusually cold winter, the city’s food rations reached an all time low of only 125 grams (about 1/4 of a pound) of bread per person per day. In just two months, January and February of 1942, 200,000 people died in Leningrad of cold and starvation. Despite these tragic losses and the inhuman conditions, the city’s war industries still continued to work and the city did not surrender.

Russian Academy of Sciences estimated total Soviet population losses due the war at 26.6 million, including military dead of 8.7 million calculated by the Russian Ministry of Defense. US casualties – 419,000. This is the total of both Pacific and European theaters of war. British dead – 450,900 (for more see WW II casualties).

So Russia, our ally in WW II, lost more than the entire current population of Texas (26 million) – so that the West could later gloat about us defeating Hitler?  And then just forget about it all 69 years later.

Another part of the “Dumbing Down of America,” I suppose. “How can people learn from history if nobody teaches them?”