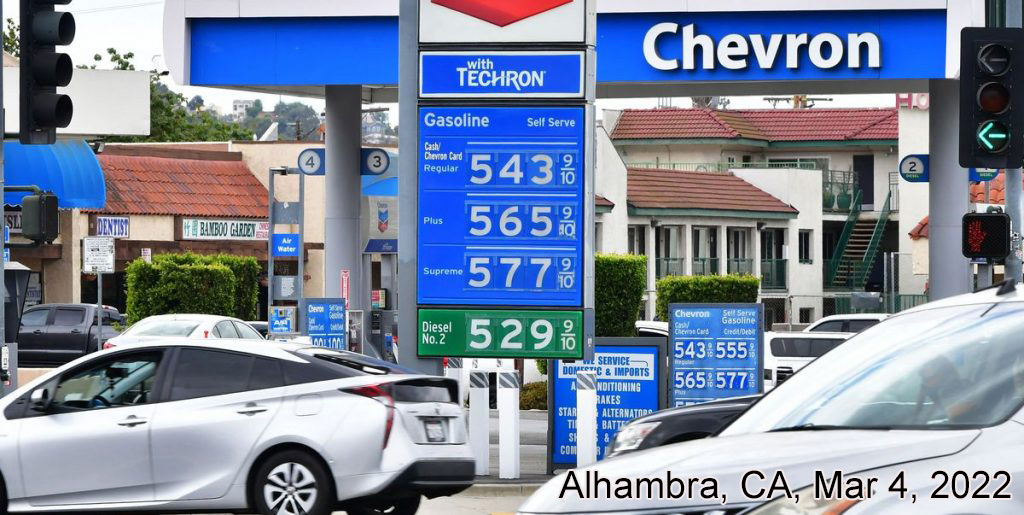 This story is another example of disinformation which one can expect from the “fake” media organizations like CNN. Only this time, it is also laced with ignorance not just bias.

There is a simple answer to the CNN headline question: “Why are US gas prices soaring when America barely uses Russian oil?” It is – PROFITEERING.

Not only is the amount of oil the US imports from Russia negligible relative to other American imports (only about 3% vs. Europe 60% and China 20% – see the charts), but it takes time for the imported oil to reach the pumps. The fact that the US retail gas prices skyrocketed instantly after Biden announced his Russia sanctions is proof that the domestic oil companies and their retail gas station operators seized the chance to fleece the American consumer right away.

Instead of condemning and punishing such gouging practices, Biden blamed Putin for the sudden jump of US gas prices!?

What does he think we are? Idiots? Knuckleheads like himself?

That was an insult to the intelligence of the average American. Yet there has been no outcry about it as far as this writer can see.

So maybe Biden was right. Maybe Americans deserve idiots for presidents. Because the idiots elect them.

One of these profiteers is Halliburton. Who is that. That’s an American oil field service company which has seen an eleven percent in crease in the value of their stock in the last month. This comes after Ukrainian officials called on the company to cease its operations in Russia to cut off a major revenue stream to Putin. So far those calls have gone unanswered, according to Bloomberg.

Halliburton has become the object of several controversies involving the Iraq War and the company’s ties to former U.S. Vice President Dick Cheney. Cheney retired from the company during the 2000 U.S. presidential election campaign with a severance package worth $36 million.As of 2004, he had received $398,548 in deferred compensation from Halliburton while Vice President.Cheney was chairman and CEO of Halliburton Company from 1995 to 2000 and has received stock options from Halliburton.

Bunnatine Greenhouse, a civil servant with 20 years of contracting experience, had complained to Army officials on numerous occasions that Halliburton had been unlawfully receiving special treatment for work in Iraq, Kuwait and the Balkans. Criminal investigations were opened by the U.S. Justice Department, the Federal Bureau of Investigation and the Pentagon’s inspector general. These investigations found no wrongdoing within the contract award and execution process.

EUROPE “ALL PAIN, NO GAIN” – REVISITED

WHICH THEY HAVE BEEN SHAMELESSLY DOING FOR THE LAST THREE DECADES

“The oft-used term “America’s European allies” is one of the greatest oxymorons of our time. “America’s European vassals” would be more appropriate. For, American government’s policy is virtually destroying our so-called “allies,” while aiding the multinational corporations.”

The preceding paragraph was published in 1998, as a lead to my column A BEAR IN SHEEP’S CLOTHING (1998), which appeared in the Chronicles magazine of Chicago as well as in Truth in Media that year.

“New sanctions on Russia, announced today (Apr 26, 2014) by the G-7 countries, a part of the Obama “All Bluster, No Muster”-Ukraine policy, are inherently anti-European. They cannot hurt Russia without hurting Europe first and foremost.”

“European banks and businesses are far more exposed to the Russian economy than are their American counterparts. Fourteen-fold more, to be exact. Trade between the European Union and Russia amounted to almost $370 billion in 2012, while United States trade with Russia was a paltry $26 billion that year, according to today’s story in the New York Times.”

In other words, nothing has changed. Washington’s anti-European policies have been consistent during the last three decades. And so have been the betrayals of the European leaders of their countries’ interests. They have continued to act as American vassals while pretending to be US allies.

Take the oil and gas business, for example. Biden has killed the $12 billion gas pipeline after Germany and Russia had completed it last year. And now, adding insult to injury, the US wants the Europeans to cut off the Russian oil and gas imports. Which would be tantamount to an economic suicide.

Why? Because Europe imports about 60% of its oil from Russia vs. only about 3% for the US.