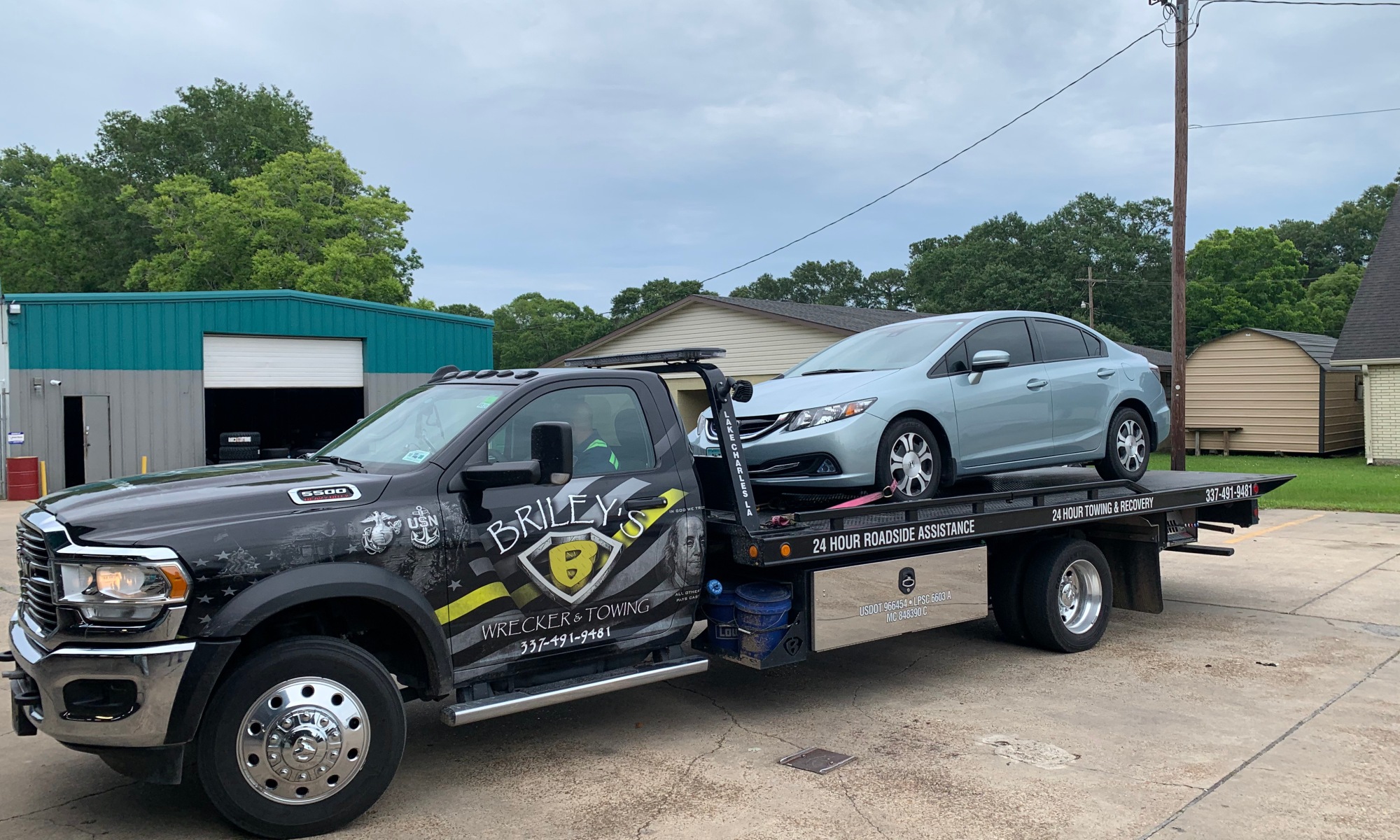 NO SPARE WHEEL, NO GOOD SERVICE, NO CUSTOMER CARE

My wife and I love to take photos of the state welcome signs when we cross state borders. During our current trip across the US, from Arizona to South Carolina, heavy traffic on the I-10 made us miss the first two – in New Mexico and Texas. As we were approaching Louisiana in late afternoon on June 1, I was determined not to let it happen again.

We were again in heavy traffic as I spotted a blue Louisiana sign. But I managed to thread the needle and drive off to the right shoulder. Alas, just before the sign, there was a large hole between the grass and the concrete curb. As I tried to avoid it, my right wheel hit the concrete curb.

My wife and I got out. She was a little shaken by my sudden action but was otherwise well. We took these pictures.

Before continuing, we checked the tires. They looked okay. But after a mile or so, I heard a funny noise.

“We must have blown a tire after all,” I muttered before pulling over again to the right shoulder.

So I got on the blower and called AAA. Luckily I had renewed my membership just before this trip. I explained the situation.

“You have a spare, right?” the operator asked.

“Sure,” I replied even though I was not entirely sure.

“I don’t know,” the AAA operator said. “We will text you when we contact the local service.”

So all we could do is wait. But something inside me made me get out of the car and double check that we indeed had a spare. When I lifted the false bottom in my trunk, I was shocked to discover that we did not. Instead, Honda had stuck in there some styrofoam box to fill the space where the spare is supposed to be.

Of course, my wife blew her stack and accused me practically of criminal negligence for not checking if the car had a spare tire when I bought it. It did not matter that I explained to her that every car buyer in America would have taken something like that for granted since even before World War I when the cars became ubiquitous.

So I called AAA again and asked for them to send a tow truck instead of a tire repair serviceman.

“How many of you are there in the car?” the operator asked.

“What difference does it make?”

“Because of the Corona virus, we cannot have more than one person riding in a tow truck.”

“Shucks!” I thought but did not say anything. “So what do we do now?”

“I don’t even know where we are, nor where we are going, and you want me to order a taxi?” I snapped.

Things seem to be going from bad to worse.

“So where is the nearest tire store to which you can tow us?”

Four or five seemingly endless minutes later, the operator returned on the line and said, “Vinton.”

“What?” I said, not understanding what that made.

“The town of Vinton is closest to you.”

I looked at my watch. It was about 4PM.

“Till what time are they open?” I asked.

“And what time is you tow truck coming?”

By now you are probably getting an idea what a deep sh… we were in. We had a disabled car. A hotel reservation in New Orleans which we could not keep. And no idea when and how we would get out from under this trouble. Or if and when we could continue our 2,100-mile trip.

So I decided to take matters into my own hands. I searched the Net and found the tire dealer in Vinton, LA. I called them to let them know that we were in trouble and were hoping to get our car towed there before they closed at 5PM.

“Oh but we are already closed,” a male voice replied. “We close at 4.”

“So much for AAA,” I thought and cursed them internally.

So I called AAA again, for about a third or fourth time, to let them know that their Plan A had a flaw, and that we had to come up with a Plan B.

“What other tire places are open to which you can tow us?” I asked.

After another interminably long wait, the AAA operator said there was a tire store in Lake Charles, LA.

This time, I did not wait for the AAA. I went on the Net and checked. Lake Charles was 35 miles away from us.

In the meantime, I got a text message from the tow truck driver. He said he would be here in about half an hour.

I quickly calculated in my head the mileage, the time to hook us up to the tow truck, and the highway speed to see what time we might be able to get to that town.

I searched the Net again and found a Discount Tire dealer in Lake Charles. “I’d better call that place.”

The man I spoke to said they were open till 6PM, but were “very busy” and could not take us.

I explained our situation to him and pleaded that he make every effort to do so.

“Let me check with the boss…”

“Oh not again,” I thought as he put me on hold.

Then the line dropped. I called again. Luckily, this time I seem to get the boss. I repeated my plea.

While we waited, my wife and I joked and laughed bout our predicament. I told here it made no sense to fret about things we could not change. She agreed and seem to relax a bit. She texted her daughter in London who joined us remotely in our adventure.

I told my wife I would cancel the New Orleans hotel reservation and that we should spend the night in Lake Charles, whether or not our tire is fixed.

The tow truck arrived at about 4:45PM. The driver still had the old instructions from AAA to tow us to a tire dealer in Vinton, LA. I explained the change of plans. He had no problem with that.

Of course not, since AAA only pays for the first three miles. The rest of the towing bill was on us. And the longer is better – for him.

Just as he was about to hook us up to his truck, a can pulled up behind us.

Evidently, the AAA did, One good thing they did.

The two of them greeted like old friends, clicking elbows instead of shaking hands – a new Coronavirus greeting between men.

We all got our marching orders synchronized. We would all meet again at the tire place in Lake Charles. Hopefully before 5;30PM.

My wife and I got into the taxi. The driver was nice. He was large man, a third or a fourth generation French-American who could not speak French.

“My mother spoke French,” he said. “But I am afraid I do not,”
he added sheepishly.

After an amiable chat during the ride, we arrived at the Discount Tire place in Lake Charles around 5:10PM. I was relieved. We made the deadline.

“Let us hope the tow truck does, too,” I thought.

We entered the office and I asked to speak to Zach. When he eventually emerged from the repair bays where he had worked, he was not overly friendly. They must have been very busy indeed. Several customers were waiting for their cars in the lounge.

I repeated my story.

“I know, Honda Hybrids don’t have a spare,” he said calmly.

“What?” I said, not quite believing my ears.

“Yeah, you’re not the first person who discovered that the hard way.”

When I relayed this to my wife, she could not believe it, either.

A short while later, the tow truck arrived. He unloaded our car and I paid the driver. Things were finally starting to look up for us.

While they were working on our car, I called and canceled the New Orleans hotel and found a new one for us in Lake Charles. By 6PM, we were out of the tire place and on our way to it.

During our search for a restaurant in which to have dinner, we discovered several casinos which were busy and thriving as if Coronavirus did not exist. No one wore masks. The pools and bars of the casino hotels were overflowing with guests. We got out of there fast and finally found a nice quiet Italian restaurant.

When we returned to our hotel, we found a fire in their outdoor fireplace. The temperature was 89F (32C).

And then I posed as if I were warming my hands on it.

The next morning, we headed straight to the local Honda dealer. I explained our predicament.

The three men in the parts department started to scratch their heads as if I had asked for passage to the moon.

One of them was an experienced mechanic. His name tag read Brian. He took over the conversation as the other two were tongue-tied. He explained that Honda Hybrids indeed did not have a spare tire. And that one cannot buy it from a dealer.

“We would have to order from California or some such place,” he said. “That’s where the Honda central warehouse is for the US.”

“And how long would it take to get it?” I asked.

“So that’s NOT an option for us since we are just passing through,” I muttered more to myself than to him.

He also suggested that we get just a regular tire instead of a special spare which has different dimensions and is more expensive.

“But then you’ll have to get your dealer to install it properly in that trunk space,” he said. “Which requires special parts and screws.”

“Or just get rid of this ‘Honda Horrid’ when we come back home,” I thought to myself.

We continued our trip praying that our four wheels carry us the rest of the way as they had for the last several years.

In the meantime, here are all 50 state border signs. So that no one ever again has to get a flat trying to take a picture of one, including that of New Mexico and Texas which we had missed. 🙂