Vladimir Putin’s interview with Armin Wolf, a reporter with the Austrian state ORF TV channel, in advance of the Russian president’s today’s visit to Austria, was a work of art.

As if to justify his last name, the reporter attacked Putin like a wolf, rudely interrupting the Russian president before he could finish his answers. It is a tactic that other lamestream media reporters (i.e., Megyn Kelly of Fox News) also used when Donald Trump was running for president.

Unlike Trump, Putin never lost his cool. Instead, he slammed the Austrian media hound dog, the Wolf if you prefer :-), resorting to perfect German so that both the reporter and the Austrian audience would get the message.

Take a look at this excerpt from the interview.

Putin also took a swing at George Soros, the controversial American-Hungarian billionaire  who has supported numerous NGOs in different countries, including in the Ukraine.

“There is such a person in the US, Mr Soros, who interferes in affairs all over the world.  There are rumors circulating now that Mr Soros is planning to make the euro highly volatile. Experts are already discussing this.

“If the North Korean leader is backing up his intentions with practical actions, for example, giving up new tests of ballistic missiles, new nuclear tests, the other side should reciprocate in a tangible manner,” he said, calling regular US military drills in the area “counterproductive.” 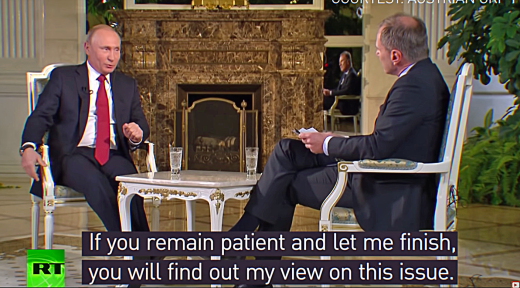