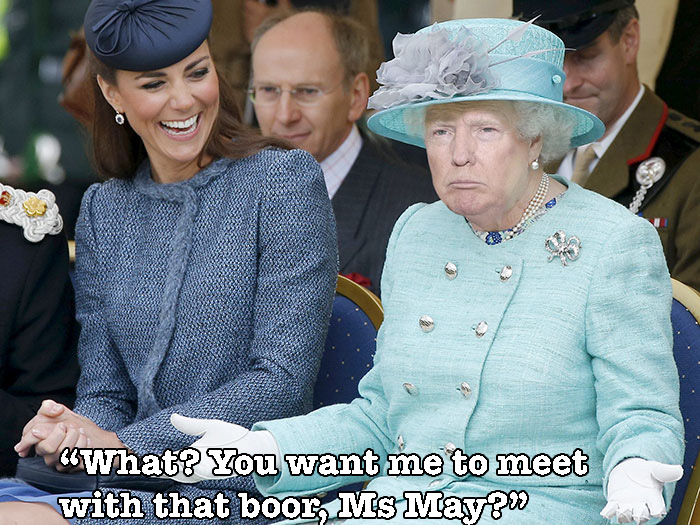 And the Queen Does Not Look Amused

How Crass Has Replaced Class in Last 60 Years

It’s been a long time coming. The British had to swallow a lot of pride and forget many insults which their leaders hurled at Donald Trump during the election when they extended this invitation for the US president to visit them.  And many still may be holding their noses when Trump finally does arrive for a state visit. But here it is… the date has been announced.

And it will be Friday the 13th! (of July). This irony is the a small consolation for a nation that once “ruled the world,” and now has to bow before an American real estate wheeler-dealer who calls himself . Nevertheless, many anti-Trump protests are also expected across Britain, like the one shown in this photo. 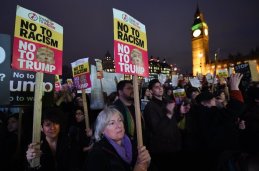 What about the Queen? How does she feel about being arm-twisted into inviting someone like that to the Buckingham Palace? Well, she does not look amused, does she?

While Trump, on the other hand, will be living his dream. He is already reportedly getting his hairdresser to work on his hair design for that event. 🙂 [written tongue-in-cheek – to see more of these wonderfully photoshopped Trump-Queen spoofs, click on https://goo.gl/wxQrZA)

It may surprise you to know that Trump will be only the third US president to be honored with a state visit to Britain. Only two American presidents had been there on a state visit before: George W. Bush, in 2003; and Barack Obama, in 2011. As part of a triumphant tour of Europe in 1961, President John F. Kennedy also traveled to London, but was not granted the pomp of a state visit. Mr. Kennedy and his wife, Jacqueline, had a private dinner with the queen.

Why Did the Kennedys Not Get a State Visit?

Considering how popular the Kennedys were in the global post-election euphoria in 1961, you may be wondering why the young Queen Elizabeth II, who was about the same age, resented them?

Because they were rich, handsome and immensely popular, real “rock stars” even before such words entered the English language. Jack and Jackie represented the American glitz and glamor and everything else the shy and modest young queen loathed. 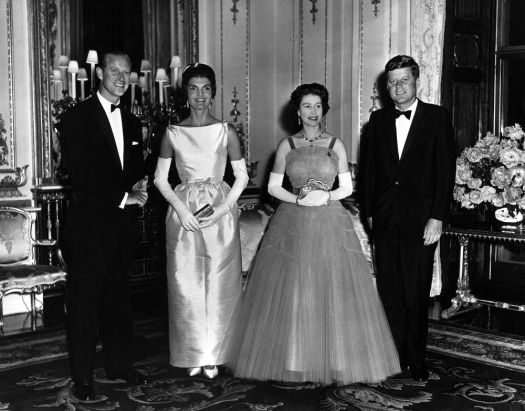 (Any similarity between Jack and Jackie and Donald and Melania is, I am sure, purely coincidental 🙂 About the only thing they have in common is – money!).

For more on that, check out the Real Reason Queen Elizabeth II Didn’t Like Jacqueline Kennedy).

And yet now, in 2018, the 92-year old Queen has buckled under the pressures of business and politics, and has agreed to host the man would not have been even qualified to serve as a footman when she was a young monarch.

How things have changed in the last 60 years. Crass has now replaced class.