NO MULTIETHNIC COUNTRY IS SECESSION-PROOF

This Writer’s 1995 Prediction Starting to Come True: “The Only Question When and How Will the U.S. Break Up, Not If”

WILL IT ULTIMATELY ILLUMINATE THE WORLD?

“Not since the fall of the Soviet Union (in 1991) has there been a world event as important as this one.” It is 5:51 AM in the U.K. at this moment. Still dark over there. But a new dawn has already risen over the former empire on which the sun had never set.The overnight tallies of the Brexit vote have shown that a majority of British people want to leave the European Union. With 52% to 48% and 90% of the votes counted, the Brits want to “LEAVE EU”.     (Truth in Media editorial, June 23, 2016)

In late November 1995, I was stuck at the Paris Charles de Gaulle airport by a combination of yet another transportation workers strike and dense fog. The Dayton Accords had just been signed. The war in Bosnia was over.  But other wars were already being planned by the New World Order ruling “elite,” grand mobsters in truth.

As war correspondent in the past six years, I had learned that the trick to both survival and getting to the real truth lay in knowing where the next action is going to take place. And then getting there before other reporters do.

So I was on my way to Belgrade. And then maybe again back to Bosnia. Alas, here I was, stuck in the Paris strike and fog.  Before leaving on this trip, I had just finished one of the seminal pieces about the next war – The “Green Interstate”.  It showed that Kosovo would be the next NWO target and that ultimately most of the Balkans would become a NATO dominion.  The map on the right, published with that story, graphically describes the geopolitical reasons for it, and the Muslim expansion into the heart of Europe.

But through the fog of Paris another vision emerged as clear as a bell. This is what I wrote down in my hotel room at Charles de Gaulle airport the evening of Nov 29, 1995:

The Only Question When and How Will the U.S. Break Up, Not If

PARIS, Nov. 29, 1995 – “What’s happening in Bosnia is going to happen in the U.S., too,” a highly decorated American veteran of foreign wars told me during our recent discussion in New York. America will split up, he predicted.

He was right. Our country is a ticking time bomb. Just like Bosnia was…Why would the U.S. break up?Two reasons.First, demographic forces similar to those which have torn Bosnia asunder are present in the U.S., too. Second, a technological revolution is under way which will accelerate the process, and will forever change the way we think and work. There is only one kind of a country which is secession-proof. It’s a homogeneous single-ethnic state. The U.S. isn’t it.                  (Truth in Media, Nov 1995)

I had also created this map to illustrate my point and suggested possible ways in which the U.S. would break up.

When I returned home from this 1995 wartime trip, I reworked this Truth in Media editorial into a WASHINGTON TIMES column, which the paper’s editors retitled into “When Cultures Collide…” (Aug 1996).

Fast-forwarding to the Brexit vote and the current timeframe, we are starting to see evidence of the British vote having a tectonic effect of causing cracks in monolithic political structures the New World Order global “elite” (mobsters) have been building for decades. Just as I said in that June 23 editorial while the last of the Brexit votes were still being counted:

“Not since the fall of the Soviet Union (in 1991) has there been a world event as important as this one,” I thought this evening.

These countries could be next now that Britain has left the E.U., the Washington Post also chimed in with this map of Europe.

And then this morning, a friend posted this cartoon on my FB timeline, implying California’s possible exit toward Mexico. Which actually inspired this editorial comment.

“CA M’EXIT implies exit back to Mexico,” I explained to my FB friend. “Since 2000, the whites (non-Hispanic/Latino) have been a shrinking minority (now at 40%). And since 2014, the Latinos have been the largest ethnic group. What’s missing in this cartoon, however, is TEXIT. Will try to add it… 🙂 Texas is the second largest state in the U.S. after California.”

So I reworked that cartoon into one that more accurately reflects the future prospects in our country.

NO MULTIETHNIC COUNTRY IS SECESSION-PROOF. Just as I said back in November 1995, while holed up in my Paris airport hotel room due to fog and strike.

If anything, things are unraveling faster than I had expected.  I thought the U.S. breakup would occur by about 2050. But our country’s ethnic quilt is already fraying at the edges. The very populous edges, as you can see from the map. 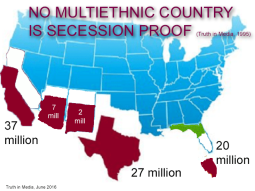 So Britain’s new dawn may be already illuminating parts of the U.S. As I said in that June 23 editorial…

“Let us toast the courage and the wisdom of the British people! They fired the first shot in this global revolution against the New World Order. Let us hope it was not in vain.”

In April 1995, with the Bosnian was still raging on, and my work as a war correspondent and geopolitical columnist taking up much of my time, I published the OpEd piece “Taming the Russian Bear” –  “Partnership for Peace” – Modern-day Version of “Drang Nach Osten” Strategy. “Would 75 States Make the “Old Continent” Safer?, I asked a rhetorical question.

Why 75 states? Because the centralized industrial era structures based on “bigger is better” were no longer workable, I thought, even at that embryonic stage of Internet development. Here’s why not…

“So is there a way out of our current foreign policy quagmire in Europe? Is there also a solution to increased strife world over? Yes, there is, if you ask Prof. A.H. Heineken, of the Amsterdam-based “Stichting voor de Historische Wetenschap” (Historical Research Institute). Dusting off some old political ideas, and then polishing them up to fit the present situation, Prof. Heineken proposed a “United States of Europe.”

According to his plan, Europe’s 350 million inhabitants would live in 75 independent states, each with a population of about five to 10 million.

Why the five-to-10 million limit?

“Because where the population exceeds 10 million, there is a manifest case for decentralization,” concluded the British Prof. C. Northcote Parkinson, in a 1970 report. In other words, it’s a matter of efficiency of government. “A state of 30 to 50 million is hopelessly inefficient,” Prof. Heineken concurred.

But both Heineken and Parkinson drew upon the ideas of an Austrian sociologist. Leopold Kohr expressed similar thoughts in his book, “The Breakdown of Nations,” published in 1957. That’s right – 1957, not 1975! He wrote that, “it is always bigness, and only bigness, which is the problem of existence – social, as well as physical.” Kohr concluded that the only solution must lie in cutting down of the substances and organisms which have outgrown their natural limits.”

Without realizing the foregoing, this writer also argued in a 1991 report that bigness in business has become a liability rather than an advantage. And he compared a successful modern services business enterprise to an amoeba – which splits up before becoming too big (and, therefore, inefficient).

So, why has Europe been so slow to adopt a good thing? One might speculate that it’s because Europeans are wedded to traditions, and are slow to change. After all, the region has not earned its nickname, the “Old Continent,” for nothing, has it?

But that would be a rather shallow explanation. Prof. Heineken points out that the German or Italian states, for example, never existed before the second half of the 19th century. In other words, they are younger than even the U.S.! Furthermore, at the time of the French revolution (1789), the majority of the population did not even speak French, and was “not able to sing the ‘Marseillaise,’ the newly-minted national anthem,” argues Prof. Heineken. It was only at the end of the 19th century that the French peasants became “Frenchmen.”

In other words, the whole notion of statehood and nationality is an industrial era invention. It is not natural! And it cannot last in its present form!

There are two main underlying reasons why organizations such as the EU or the U.S. cannot survive in the modern internet era.

First, because they are top-down creations by men and women thirsting for power and domination over others. In his 1982 bestseller “Megatrends,” John Naisbitt explained that “trends are bottom-up, fads are top-down.”

Second, because centralized control of a free-for-all chaos that the Internet has unleashed is simply impossible. It’s like trying to bottle air. Alvin Toffler did an outstanding job of describing this in his 1980 bestseller “The Third Wave.”

These two books represented the basic foundation of much of my own analytical work in the 1980s and 1990s in both business and geopolitical fields. And both were published more than a decade before the earliest notions of the Internet entered human consciousness.

So combine this with the work Profs. Parkinson, Heineken and Stichting did as far back as the 1950s, and you can see why a top-down creation like the EU with centralized power structure has got to fail. Sooner or later. Brexit was just its first kick in the pants.

It is a good thing for the world that the industrial era dinosaurs put the men and women in charge of governments who are merely toeing their line without an ounce of independent thought. Because now everybody can see how hopelessly out of touch with reality this self-appointed “elite” really are. They are still trying to put a square peg in a round hole.