TINY MONTENEGRO IS ABOUT TO BECOME NATO’S LATEST ACQUISITION

And That Is a Huge Disappointment to Someone Whose Family Has a Mountain and a River Named After Them in Montenegro, and a Christian Monastery They Built There over 600 Years Ago

I must declare upfront that this will not be an impartial

piece as befits reports by a former war correspondent. That’s because even though I am not a citizen of the subject country (Montenegro), nor have I ever lived there, I feel a strong kinship to the land and the people of this tiny Balkan principality the size of Connecticut but with population of less than 700,000. Which is why I feel I have an ancient ancestral right to speak about Montenegro.

TINY MONTENEGRO IS ABOUT TO BECOME NATO’S LATEST ACQUISITION

Last week, the government of Montenegro signed a protocol on joining NATO. When ratified by the Alliance’s other 28 members – which is a formality expected to happen before the end of this year – Montenegro will have completed its betrayal of Serbia.

Here’s an excerpt from an article in the Russian media a friend of mine from Chicago sent me this morning:

While the country has a population fewer than 700,000 and no more than 1,500 members of the military, the reason NATO wants Montenegro is not its military might, but in equal measures strategic location and symbolism.

Geographically speaking, the country is a natural fortress, and could be held against an invading force by a much smaller number of defenders, Thermopylae-style.  As a result, Montenegro was the only part of the Balkans which was never conquered by the Ottoman Empire.

After trying many times and failing, the Turks settled for exacting tribute instead. This enabled the small Orthodox Serb community to preserve their faith, culture and memories – until their statehood could be resurrected in the 1800s. The Prince-Bishops of Montenegro were a loyal ally of Imperial Russia, to the point of declaring war on Japan in 1904 in solidarity with the Tsar.

Montenegro united with Serbia in 1918, and soon thereafter became part of the Kingdom of South Slavs, which later became Yugoslavia. It stayed in the union with Serbia even after Yugoslavia was dismembered by the EU and NATO in the early 1990s.

Montenegro was also bombed by NATO airplanes in 1999, when the Alliance attacked Yugoslavia in support of the ethnic Albanian separatists in Kosovo. When NATO sought to drive a wedge between Serbia and Montenegro by sparing the latter, the following graffiti appeared in the city of Niksic: “Bomb us too, we’re not lepers.”

Yet the leader of Montenegro, Milo Djukanovic, decided to switch allegiances after that war. Having come to power in 1989 as a fierce supporter of union with Serbia, he reinvented himself a decade later into the biggest anti-Serb in the former Yugoslavia, a fairly daunting task. (an excerpt from Montenegro A Strategic Importance, Surrounding Serbia And NATO’s Aggressive Stance Towards Russia). 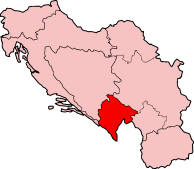 Djukanovic, wasted no time backstabbing Yugoslavia’s late president Slobodan Milosevic, his benefactor who put him in power in 1989. By December of 1999, less than six months after NATO’s bombing, Djukanovic was already brownnosing Madeleine Albright, the chief architect in the Clinton administration of the war on Serbia (see the Truth in Media December 1999 article CAVORTING WITH THE ENEMY from which some of these pictures are taken).

So what the Ottoman Empire never succeeded in doing by force, NATO will have accomplished without firing a shot. Thanks to the local Montenegrin quislings who were paid off well for their betrayal of the Serbs.

How many people do you know whose families have a mountain and a river named after them? And whose ancestors built a Christian monastery over 600 years ago, deep down in the gorge of the Djurdjevica Tara river?

Yes, that’s what the Djurdjevic family did after they settled down in northern Montenegro around the turn of the 14th century when Montenegro was known as Zeta.

The survivors of the Battle of Kosovo, that is, among my family members. Many of my ancestors perished along with King Lazar on that Field of Blackbirds on June 28, 1389 (which is what Kosovo means in Serbian). Those who survived accompanied the widowed Queen Milica on her journey to Montenegro.

And that’s how this mountain and this river got the Djurdjevic family name.

In May 2008, I traveled to Europe for the explicit purpose of reconnecting with the Djurdjevic Mountain, the Djurdjevica Tara river and doing a shamanic ceremony there to honor the land and my ancestors. The discovery of the early 15th century Archangel Michael monastery was bonus. I had not heard about it before I got there (see ANSWERING A MOUNTAIN CALL: COMMUNING WITH MY MOUNTAIN, RIVER). 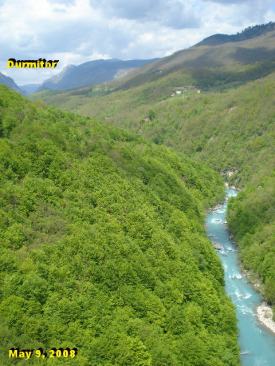 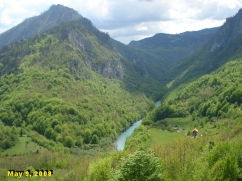 Views from the bridge

Views from the  bridge

I had been on this bridge twice before. The first time in 1990, when I brought my children with me so they could also see where their roots lay. The second time was in 1994, when I was working in the Balkans as a war correspondent. My two companions and I had a harrowing ride from the Muslim city of Gorazde to this area, some of it during the night.

For those unfamiliar with the Montenegrin cultural background and history, the vast majority of the residents of the ruggedly beautiful country consider themselves Serbs. They speak the same language as the Serbs, they use the same Cyrillic alphabet, they have the same Orthodox Christian religion.  At least that was the case because the Montenegrin turncoats and quislings, like Milo Djukanovic, the country’s president, started to sell out their Serbdom for a few pieces of silver.

Montenegrins also have a proud history and are known as fierce warriors. Like the Scottish Highlanders, they also had clans which have been known to fight each other as well as the external enemies. But when faced with foreign invaders, the clans pulled together as one.

But now that the seeds of division and corruption have been sewn by Djukanovic and his gang of quislings, Montenegro is about to fall into NATO’s lap like a ripe apple.

Bottom line? What the Ottoman Empire never succeeded in doing by force, NATO will have accomplished without firing a shot.

And that is a huge disappointment to this writer whose ancestors helped create that country. So for my money, NO NATO IS WELCOME ON MY MOUNTAIN!

So the NATO countries may have bought the Montenegro politicians, but not the people.

Furthermore, last May, however, the Montenegrin media quoted a Russian Duma deputy, Mikhail Degtyarev, as saying that Montenegro would be “a legitimate target of Russian missiles” if it joined NATO (see Anti-Russian Remarks Land Montenegro Minister in Trouble http://russia-insider.com/en/anti-russian-remarks-land-montenegro-minister-trouble/6055).

So there is no such thing as a free lunch or a cheap betrayal.

Nor is my birth country – Serbia – likely to follow suit, even if some Serbian politicians are also angling for NATO membership. Fortunately, most of the Serbian people do not forget that NATO dropped more bombs on them in 1999 than on all other alleged “terrorists” around the world combined.

Here’s what the Truth in Media editor said about that in 1999, and repeated it in a number of his speeches at demonstrations and lectures in New York, Washington, DC, Phoenix, Toronto, Canada, Sydney and Perth Australia and in Belgrade, Nis, Kragujevac and Valjevo, Serbia:

A CeSID poll in June 2015 conducted with the support of USAID indicated that only 12 percent of those polled supported for NATO membership, down from 25 percent in 2012. No wonder tens of thousands of protesters hit the Belgrade streets on March 24 of this year, the anniversary of the start of NATO’s bombing (see the pictures).

And here’s also a message this group of Serbs, gathered in front of the US Air Force plane parked at Batajnica military air base, sent to NATO… 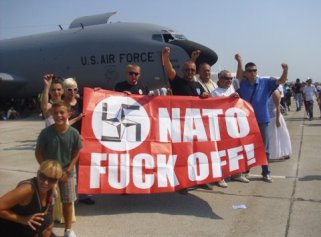 Want to know what the biggest driving force is behind the NATO expansion and warmongering?

Take a look at the top 10 Pentagon contractors.

Lockheed Martin was the largest single contractor for the U.S. government in 2015 by far with $36.2 billion contracted. Of that amount, $29.4 billion was contracted for defense purposes. Lockheed Martin is known for developing the C-130 Hercules, F-22 Raptor and the F-35 Lightning II. The latter is the most expensive U.S. weapons system ever, costing some $400 billion and due to cost another $1 trillion over the course of its life cycle.

DJURDJEVIC: And who financed all these wars? Well, the U.S. taxpayer, of course. You and me. But with borrowed money from the Wall Street banksters… the darkest forces behind the mayhem our government is sowing around the world.

Top 10 U.S. banks have $11 trillion of the $13 trillion in total banking assets. And we, the taxpayers, owe them 101% of everything we make. Yes, our national debt is now bigger than the U.S. GDP.

So the defense contractors and the Wall Street bankers are the forehand and the backhand of all U.S. global wars and military expansions, including NATO’s in Eastern Europe.

The OCCRP award acknowledges those who best promote Uncivil Society

His first real job was as the Prime Minister of Montenegro. He has either been the President or Prime Minister for most of the nearly three decades of his career and the life of his country. While he casts himself as a progressive, pro-Western leader who recently helped his country join NATO and is on track to join the European Union, he has built one of the most dedicated kleptocracies and organized crime havens in the world.

For his work in creating an oppressive political atmosphere and an economy choked by corruption and money laundering, OCCRP honors Milo Djukanovic, Prime Minister of Montenegro, as OCCRP’s Person of the Year for his work in promoting crime, corruption and uncivil society.

“We really see this as a lifetime achievement award,” said OCCRP editor Drew Sullivan. “Nobody outside of (Russian President Vladimir) Putin has run a state that relies so heavily on corruption, organized crime and dirty politics. It is truly and thoroughly rotten to the core.”

Nominating Djukanovic this year was Vanja Calovic, Director of the Network for Affirmation of NGO Sector (MANS), a civil society organization based in Montenegro.

“This is a deserved award,” Calovic said. “Djukanovic, the last European dictator, has captured our country for his own private interests and turned it into safe haven for criminals. While he, his family and friends enriched themselves, ordinary people suffer from poverty, injustice and lawlessness, while those who dare to talk about the corruption become his targets.”

For more, see…  https://www.occrp.org/personoftheyear/2015/index.html via @OCCRP

DJURDJEVIC: Reading the above, you would think this is a joke. It is not. What is happening in Montenegro is simply a more blatant example of the criminal enterprise we call the New World Order which also has America in its grips.

Milo Djukanovic, the world’s most corrupt politician, has been groomed by Bill Clinton and his Secretary of State – Madeleine Albright. This writer has written many stories about this “unholy alliance” while working as a war correspondent in the Balkans in the 1990s.

So you see here some of the images from that era brought back to light on May 31 of this year in the story “CAVORTING WITH THE ENEMY: MONTENEGRO’S EVOLUTION – FROM HEROIC TO VASSAL” – http://wp.me/p3QU1S-1q6.