OBAMA WILLING TO TRADE MORE FRACKING IN AMERICAN HOMELAND FOR WAR ON RUSSIA?

“The most frightening possible result of sanctions is that the West could nail shut the “window to Europe” that Russia has been laboring hard to develop ever since Peter the Great first built it at tremendous cost in the early 18th century.”

The Moscow Times is the English-language New World Order rag in the Russian capital. So you’d think they might echo Obama’s and other Washington war(t)hogs’ recent anti-Russian diatribes. Maybe not always.

Even Moscow Times’ Ivan Sukhov drew the line on manic Russophobia emanating from Washington these days. In a front page piece published yesterday in both Moscow Times and Huffington Post, this journalist tried to remind the world of the painful and bloody lessons of history in the last two centuries since Peter the Great opened Russia’s window to Europe.

The piece was accompanied by an image of a Russian Bear straddling two trees – East and West. I used it as basis for a cartoon image that reflects the true nature of East-West relations at this moment in history.

During the World Cup in Brazil, Germany’s Angela Merkel and Russia’s Vladimir Putin met and agreed to pursue a peaceful resolution to the Ukraine conflict. But the New World Order leaders would not hear of it. So they ensured that the downing of MH17 put at least a halt, if not an end, to such peaceful rapprochement between the EU (Germany) and Russia.

So here’s now a true picture of who is who in the quest for peace or war. Our (American) Nobel Peace Prize Winner has morphed into the world’s chief flamethrower, aiming for the fledgling peace dove.

During a quarter century since the end of Cold War, the world’s would-be masters have only proven two things:

1. They are merely Masters of Disasters

There has been also a remarkable consistency in US anti-European policy in the last two decades (see A Bear in Sheep’s Clothing, Dec 1998).

Right now, for example, Washington is using all possible means, including mass murder, to try to corral Europe into staying in its harness on Ukraine and against Russia.

US WILLING TO TRADE MORE FRACKING IN AMERICAN HOMELAND FOR WAR ON RUSSIA?

And not just Europe. The American president and his administration have just proven how UNAMERICAN they really. They willing to trade more fracking of American homeland for a war on Russia. 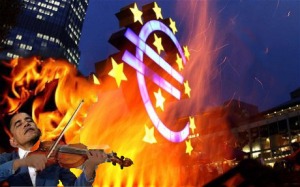 Which means, more damage to the American environment, especially in the Midwest, and more health and safety risks for the American people.  And all that, just for the (remote) chance of displacing Russia’s natural gas exports to Europe (see Europe: All Pain, No Gain, Apr 2014).

No wonder there has been already an eruption of environment groups’ protests against such Obama policies. Two days ago, the Huffington Post reported that, three dozen environmental groups sent a letter to the Obama administration on Thursday (July 24), asking him to reject part of a proposed trade deal with the European Union that would give a major boost to fracking in the U.S.

Here are some excerpt from that HP report:

Given the sheer size of the EU economy — roughly equivalent to that of the United States — the proposal would dramatically increase the demand for American oil drilling and natural gas hydraulic fracturing, or fracking.

Burning natural gas is less environmentally destructive than oil or coal, but not nearly as beneficial as clean energy alternatives. The energy required to ship natural gas abroad would offset much of its environmental benefit. Extracting the gas with fracking may destroy local ecosystems and pollute drinking water (also see THRIVE movement story: No Fracking Way, just released today 7-26-14).

The U.S. government banned crude oil exports in 1975. The U.S. Department of Energy currently has the power to reject applications for natural gas exports to countries that do not have a free trade agreement with the U.S.

Trade deals frequently have more to do with foreign policy concerns than economic or environmental considerations. Recent tension with Russia over Ukraine, in particular, has highlighted the EU’s dependency on Russian natural gas. Loosening U.S. exports of natural gas to the EU would increase American leverage in diplomatic negotiations involving Russia.

Wonder what the Nobel Peace Prize committee members would say now about the man whom they awarded the said Prize in 2009? “Give it back?”

How Low the West Has Fallen

In another news story on July 22, some citizens of Berlin have created an ad hoc billboard at Checkpoint Charlie, the famous East-West crossing during the Cold War. The pictures protested the West’s role in igniting and fanning the flames of war in Ukraine.

It was near the same spot over half a century ago that President Kennedy delivered his famous “Ich bin ein Berliner”-speech (I am a Berliner).

How low the West has fallen since 1963. Back then, America was the country that stood for hope and freedom. Now, it is an Evil Empire, not unlike the Soviet Union, denying that same right to millions of people around the world.

I propose that we pause and hang our heads low after reading these lines. And then join together once again in a Peace Prayer the Truth in Media suggested a week ago:.

Earlier this afternoon (July 18), I did a shamanic ceremony at the Anahata-Huaca-Ahu (sacred place at 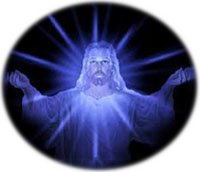 the Rainbow Shower) for the MH17 victims and their families. I asked the Spirit to let Peace and Love prevail over the Dark Forces that are bent on creating havoc on this planet. I also asked that their power and influence be either neutralized, or that they be removed from the Blue Star Earth altogether. If it please the Spirit, of course.

When I finished, I realized I was all choked up. That surprised me. Tears were rolling down my cheeks – tears of Love for my Fellow Man/Woman. And my heart was aching so intensely that I am certain the Spirit felt it and received the prayer directly from the heart, the words notwithstanding.

Please join me in this Prayer for Peace if it resonates with your heart.  And put your whole heart into it in order for the Spirit to receive it as such.

It is also important not to feel any anger or hatred, not even for the perpetrators of this heinous crime. Because what we send up to the heavens, comes back to us, too. It is not for us to be the judge and jury. That’s the Creator’s job.

A VIEW FROM THE EAST

POLITIKA: A view from the East editorial by Smajlović (PDF)

In response to this piece (MASTERS OF DISASTERS), a friend from London, England, sent me a link to an editorial published in the oldest Serbian newspaper – POLITIKA, based in Belgrade (if you click on the above PDF link, you can read a Google translation of it. It is not the best, but it will have to do).

The editorial carried a remarkably similar message about Ukraine as did a number of recent Truth in Media pieces. Such as this one, “Ukraine: NATO’s Latest “Drang Nach Osten” Target,” published with days of the Kiev coup d’etat last February.

Here’s my reply to the author, published in today’s POLITIKA (click to enlarge image): 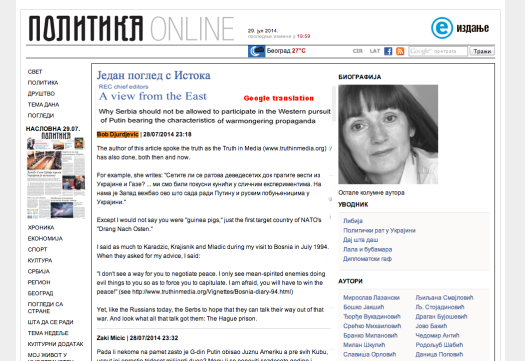 4 Replies to “MASTERS OF DISASTERS”