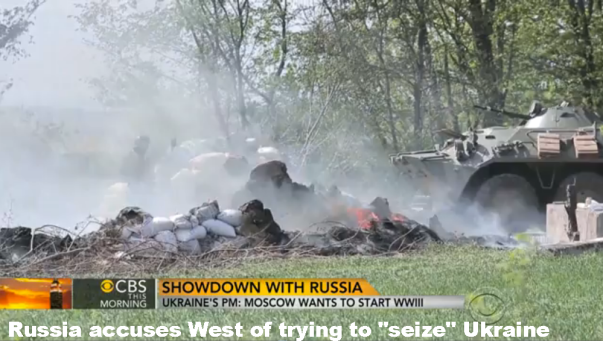 Ukraine conflict is not about winning or losing; it is about getting the European NATO countries to increase their military spending

Whatever happened to presidents who practice “speak softly and carry a big stick” – policies? Gone with the wind, it seems.

Today, America has a president who is “all bluster, no muster.” Obama and his foreign policy peons keep shouting and making daily threats to Russia over Ukraine. Meanwhile, the world’s largest nuclear power – Russia, which does carry a “big stick” – is quietly gaining ground both on the ground and in diplomatic circles.

Ever since the Obama administration started stoking the Ukraine conflict by engineering the Feb 21 Kiev coup d’etat, they have been engaging in a war of words with Russia. But their empty threats fell on deaf ears in Moscow. Because Russia knows it holds all the trump cards.

So why would Obama charge headfirst into a conflict they are bound to lose, either militarily or diplomatically?

Because it is not about winning or losing. It is about getting the European NATO countries to increase their military spending.

To carry on like that ad infinitum, one needs enemies.

Henry Kissinger: “Demonization of Putin is not a policy. It is an alibi for the absence of one”

Alas, the end of the Cold War has deprived the US “death merchants” of their biggest and the most profitable foe – the Soviet Union.

No problem. As Perfidious Washington has done many times before, they invented new ones. Enter Big Laden, Saddam Hussein, Muammar Qaddafi, Slobodan Milosevic… Like these former New World Order targets, Putin is now being portrayed by the NWO media as the latest “Hitler.”

But unlike some other enemies Washington Crisis Factory has manufactured, Putin has more nukes and natural resources than Washington. In other words, he carries a bigger stick than his verbal tormentors.

No wonder that even some US foreign policy veterans are leery of  Obama administration’s tactics. Henry Kissinger argues, for example, “the demonization of Putin is not a policy. It is an alibi for the absence of one.”

So what should Obama do?

Military confrontation not a viable option

That depends on one’s vantage point. From the standpoint of the US “death merchants” on whose behalf the US president is currently acting, Obama is doing exactly the right thing: Ratcheting up a conflict out of thin air. Back to a new Cold War. More money for the US war machine makers. But from the American people’s point of view, Obama should pick up his little war toys and leave Ukraine alone. Here’s how the former presidential candidate Pat Buchanan put it in his today’s (Apr 25) column:

“What we must recognize is that, Beltway bluster about U.S. troops in the Baltic and warships in the Black Sea aside, the United States is not going to war with Russia over Ukraine, or Estonia.

For we cannot defend Estonia either. By bringing the Baltic nations into NATO, as some of us loudly warned at that time, we were handing out war guarantees no sane president was going to honor.

As we hold a weak hand in Ukraine, we should let Putin take the lead.

What should we do if Putin seizes Southern Ukraine to Odessa?

What did Ike do about Hungary in 1956, or JFK do when the Wall went up? What did LBJ do about Czechoslovakia in 1968, or Reagan do when Solidarity was crushed?

Mature leaders, they accepted militarily what they could not prevent.

Like those presidents, Obama should take the military option off the table and use his diplomatic, political and economic weapons, and keep communications open.”

How likely is that Obama would do that? Well, about as likely as was his keeping his elections promises to end foreign wars and to close the Guantanamo prison. Both were key platforms of his first election campaign. Neither was fulfilled. And yet like a good NWO patsy, he was “elected” again four years later.

So stand by for another chapter of the “American Demo Farce” to unfold in Ukraine (my Washington Times column, Nov 1996). Obama will back down, of course. But his sponsors, the US “death merchants” will have gotten what they want – a new enemy. And a new reason for their European allies to increase their military budgets.

“There is nothing new under the sun,” King Solomon noted in Ecclesiastes  1:4-11. Those who do not learn from history, are doomed to repeat it. * * *

EU vs. US Military Spending

Between 2006 and 2008 the aggregated defence expenditure of the 26 EU countries has been about half that of the US.

Comparing defence spending with other macroeconomic data, in 2010 US defence expenditure represented 4.8% of GDP and 11.2% of overall government expenditure. In the EU these ratios were, respectively, 1.6% and 3.2%.

Europe: All Pain, No Gain

New sanctions on Russia, announced today (Apr 26) by the G-7 countries, a part of the Obama “All Bluster, No Muster”-Ukraine policy, are inherently anti-European. They cannot hurt Russia without hurting Europe first and foremost.

European banks and businesses are far more exposed to the Russian economy than are their American counterparts. Fourteen-fold more, to be exact. Trade between the European Union and Russia amounted to almost $370 billion in 2012, while United States trade with Russia was a paltry $26 billion that year, according to today’s story in the New York Times.

As a result, the European business executives have lobbied energetically to head off or at least dilute any sanctions, making it hard for American and European political leaders to come up with a package of measures with enough bite to influence Moscow’s behavior in Ukraine.

So “more bluster, no muster” from Perfidious Washington even on the economic front? Because the result will be “all pain, no gain” for Europe.

Which begs the question: How long will Obama’s “European allies” stay as “allies” if they are the ones expected to suffer so the US “death merchants” can profit?  Sadly, they have been blind to the obvious for at least two decades: Washington is not their friend; the US/NATO is a bear in sheep’s clothing.

That’s what this writer said in a Chronicles magazine column 16 years ago. Here’s an excerpt…

The oft-used term “America’s European allies” is one of the greatest oxymorons of our time. “America’s European vassals” would be more appropriate. For, American government’s policy is virtually destroying our so-called “allies,” while aiding the multinational corporations.

This is not unlike the Soviet bear’s treatment of its Eastern European “allies,” read minions. Only more perfidious. For, the West Side bear has stuck its six big claws into the back of Madame Europe, and is dragging her into its lair, while pretending to save her and her heir. (“Save her from what?” – has been a mystery ever since the end of the Cold War and the demise of the Soviet bear).

Perhaps the best possible outcome of the Ukrainian crisis would be if NATO were to fall apart. Its death was expected a quarter century ago, when the Berlin wall fell. For, the only beneficiaries of its existence are the American and other western arms manufacturers and dealers.

NATO’s lease on life was extended by American misadventures in Bosnia, Serbia, Iraq and Afghanistan, among some “made in Washington” foreign wars. So far, the European allies have gone along with their Washington Big Brother like obedient poodles. But that may change if the European BUSINESS leaders decide to say “Nyet” to Washington.

“Neither in energy terms, nor politically, should we turn away from Russia,” Rainer Seele, chairman of Wintershall (a subsidiary of German chemical giant BASF), was quoted as saying on Friday. “Sanctions will not help anybody, they would not just hurt Russia, but also Germany and Europe as a whole.”

Gerhard Roiss, the chief executive of the Austrian oil and gas supplier OMV, told New York Times that his company has been working with Russian energy giant Gazprom for five decades, but has never before seen its business ties endangered as they are now.

And you think the Ukrainian blunder is Obama’s doing? Think again. The above map of Europe, bearing the bear claw scars, and the cartoon below were created and publised by the Truth in Media during the Clinton administration. We can just substitute Obama and Kerry for Clinton and Albright on the deck of New World Order’s “Santa Maria.”

As we noted in yesterday’s article, “there is nothing new under the sun,” quoting King Solomon noted in Ecclesiastes  1:4-11. Those who do not learn from history, are doomed to repeat it. And the New World Order leaders show no signs of learning from anything or anybody in their pursuit of greed and power. 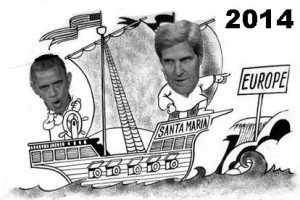 6 Replies to “OBAMA’S UKRAINE POLICY: ALL BLUSTER, NO MUSTER”