MAKE A DONATION TO HELP THE TYPHOON HAIYA SURVIVORS

I don’t know about you, but for me, it was difficult to just sit back and read the stories about the devastation in the aftermath of the deadly Philippine typhoon that claimed more than 10,000 lives this weekend.  We have many Filipinos in the Hawaiian islands. The ones I have gotten to know are all hard-working family-oriented folks. I felt I needed to do something to help these poor people, the “lucky” survivors.  But how do you do that from thousands of miles away? 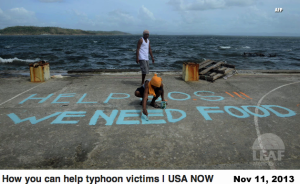 As it turns out it was not easy to find a humanitarian organization in the richest country in the world that seemed both compassionate and trustworthy. But after some effort, I finally did. And have already made a substantial donation to help the victims. So I invite you to do the same – make a gift from the heart – within your personal means, of course.  Just click on…

Here’s is a “thank you” card I received from them.

Here’s also a video at the USA TODAY web site that directed me to this humanitarian organization. It’s less than 90 seconds long. And it has a lot of useful information if you would like to help.

How you can help typhoon victims | USA NOW

And now, here are some photos that illustrate the extent of devastation in the wake of this deadly typhoon (click to enlarge).

US Marines land in Philippines to aid typhoon survivors

Monday, Nov 11, 2013 – U.S. Marines landed Monday at some of the worst-hit areas of the Philippines, bringing water, generators and other critical supplies to survivors of Friday’s deadly typhoon that may have taken as many as 10,000 lives.

Aid Going To Philippines In Haiyan’s Wake, But Not Reaching Those Who Need It

“We need help. Nothing is happening,” said Aristone Balute, an 81-year-old who didn’t get on a flight out of the city. “We haven’t eaten since yesterday afternoon.” Her clothes were soaked from the rain, and tears streamed down her face.

An Associated Press reporter drove through the town for around 7 kilometers (4 miles) on Wednesday, seeing more than 40 bodies. He saw no evidence of any organized delivery of food, water or medical supplies, though piles of aid have begun to arrive at the airport. Some people were lining up to get water from a hose, presumably from the city supply.