An exclusive special video news report from the streets of Belgrade

When I went to Saint Marko cathedral on July 12 to light a candles for my father and brother, as I usually do, I also stopped at the nearby Russian Holy Trinity church. A sign on the door said that there was going to be special liturgy on July 17 at 11:00 to commemorate the last Russian Csar, Nikolai II.

I knew that he and his family were brutally murdered on that day exactly 100 years ago. So I made a note to be sure to come back and attend the service. Instead, I was an eyewitness to and a reporter from a large procession that wound its way from the Holy Trinity Church, past the Parliament Building to Terazije and down King Milan street.

Here’s an exclusive special video news report about this event. Be sure to pay careful to attention to my narration about a conversation I had with two Russian officers who were part of the procession. The conversation was in Serbian and the two officers were most likely Serbs.

“So why wear a Russian military uniform?” I asked one of them.

“Because he is a spy,” the officer who was marching behind him joked. Or maybe he did not. 🙂

Anyway, it was exciting and to be the first to file a “live” report from such an important event.

A PHOTO ALBUM FROM THE EVENT 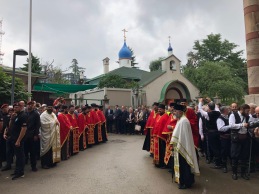 100 YEARS AGO: CZAR NICHOLAS II AND HIS FAMILY EXECUTED BY COMMUNISTS

Czar Nicholas II and his family were executed by the Bolsheviks on this day in In Yekaterinburg, Russia, bringing an end to the three-century-old Romanov dynasty.
Crowned in 1896, Nicholas was neither trained nor inclined to rule, which did not help the autocracy he sought to preserve among a people desperate for change. The disastrous outcome of the Russo-Japanese War led to the Russian Revolution of 1905, which ended only after Nicholas approved a representative assembly–the Duma–and promised constitutional reforms.
The czar soon retracted these concessions and repeatedly dissolved the Duma when it opposed him, contributing to the growing public support for the Bolsheviks and other revolutionary groups. In 1914, Nicholas led his country into another costly war–World War I–that Russia was ill-prepared to win. Discontent grew as food became scarce, soldiers became war weary and devastating defeats at the hands of Germany demonstrated the ineffectiveness of Russia under Nicholas.
In March 1917, revolution broke out on the streets of Petrograd (now St. Petersburg) and Nicholas was forced to abdicate his throne later that month. That November, the radical socialist Bolsheviks, led by Vladimir Lenin, seized power in Russia from the provisional government, sued for peace with the Central Powers and set about establishing the world’s first communist state.
Civil war broke out in Russia in June 1918, and in July the anti-Bolshevik “White” Russian forces advanced on Yekaterinburg, where Nicholas and his family were located, during a campaign against the Bolshevik forces. Local authorities were ordered to prevent a rescue of the Romanovs, and after a secret meeting of the Yekaterinburg Soviet, a death sentence was passed on the imperial family.
Late on the night of July 16, Nicholas, Alexandra, their five children and four servants were ordered to dress quickly and go down to the cellar of the house in which they were being held. There, the family and servants were arranged in two rows for a photograph they were told was being taken to quell rumors that they had escaped. Suddenly, a dozen armed men burst into the room and gunned down the imperial family in a hail of gunfire. Those who were still breathing when the smoked cleared were stabbed to death.
The remains of Nicholas, Alexandra and three of their children were excavated in a forest near Yekaterinburg in 1991 and positively identified two years later using DNA fingerprinting.
The Crown Prince Alexei and one Romanov daughter were not accounted for, fueling the persistent legend that Anastasia, the youngest Romanov daughter, had survived the execution of her family. Of the several “Anastasias” that surfaced in Europe in the decade after the Russian Revolution, Anna Anderson, who died in the United States in 1984, was the most convincing. In 1994, however, scientists used DNA to prove that Anna Anderson was not the czar’s daughter but a Polish woman named Franziska Schanzkowska.
http://www.history.com/this-day-in-history/romanov-family-executed

4 Replies to “SERBIA REMEMBERS NIKOLAI II… AND HONORS RUSSIAN CZAR AND HIS FAMILY, SLAIN 100 YEARS AGO”