WE ARE IN A SIMILAR SITUATION NOW AS RUSSIA WAS IN 1917; WILL THE OUTCOME BE THE SAME?

LIKE JACOB SCHIFF IN 1917, SOROS IS THE FRONT MAN OF THE “HOUSE OF ROTHSCHILD”

History is repeating itself. Unfortunately. What the communist mob did to Russia in 1917, led my Lenin and Trotzky, and financed by the Rothschilds through Jacob Schiff, a New York banker, the neo-communist thugs financed by George Soros, another front man of the House of Rothschild, are trying to do in America – carry out an American Neo-Communist Insurrection (see (see “George Soros Funded by the House of Rothschild” – https://goo.gl/jDJ4gw).

And just like the Russian Tsar Nicholas II was their target one hundred years ago, now they are aiming to remove a democratically-elected American president from office.

So why has George Soros not been arrested and charged with treason and sedition under the 18 U.S. Code Chapter 115 – TREASON, SEDITION, AND SUBVERSIVE ACTIVITIES? (and others – see below).

That’s the question the Attorney General Jeff Sessions should be answering. He should be investigating and arresting international criminals like Soros instead of wasting his department’s resources on chasing the Russian ghosts from the 2016 election.

That’s the question the Attorney General Jeff Sessions should be answering. He should be investigating these international criminals, and their domestic terrorists, instead of wasting his department’s resources on chasing the Russian ghosts from the 2016 election.

Meanwhile, Trump had better start taking his enemies head on.  Lest he wants to end up like Tsar Nicholas and his family.  God forbid.

The president seems to have regrown his “cojones” which he lost when he signed the new Russia sanctions legislation in early August. He was quite combative in a White House press conference on Aug 15 with a crowd of belligerent and disrespectful lamestream media attack dogs.

This Guardian video is a 3.5 min compilation of Donald Trump’s comments:

Keep in mind that this London daily – the Guardian – as an “alt-left” liberal newspaper. So if you read their article after watching the video and hearing the president’s comments from his own mouth, you will see how such dishonorable media distort the news and package their lies and deceptions with omissions and false labels. Which is why I NEVER read their articles for news content, only for extreme “alt-left” views.

PROFESSIONAL TROUBLE-MAKERS IMPORTED TO CREATE CHAOS AND VIOLENCE, AGAIN JUST LIKE IN RUSSIA IN 1917

During the last year or so, there has been an overwhelming amount of evidence that the thugs who tried to disrupt the anti-Trump rallies and other public events across America were paid professional trouble makers. And the evidence points to George Soros as the Insurrectionist-in-Chief. 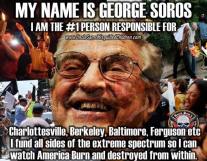 Take Maile Hampton, for example, aka KwameKahlo on Twitter. She is a self-described “Marxist Leninist.” And she has been seen and photographed at protests all over California during the Election 2016, and even in Mexico.

“In the span of only 10 days, Hampton appeared at multiple protests. She was at one against University of California, Davis, Chancellor Linda Katehi, then two days later appeared in Mexico protesting labor conditions for Mexican farm workers.

A week later, she was seen at the California State Capitol on behalf of the Alliance of Californians for Community Empowerment (a former ACORN group), protesting in favor of increasing the minimum wage to $15 per hour.

Anti-Trump protesters in New York reportedly admitted they answered ads on Craigslist and were being paid to protest Trump.

Writing in the Daily Caller in March, Trump supporter Roger Stone said, “I learned most were from MoveOn or the Occupy movement … Several admitted answering a Craigslist ad paying $16 an hour for protesters.”

You can also see these ads on Craigslist in Wisconsin and in Washington (state) soliciting “women, students and minorities” to come and demonstrate at $15-$20 per hour. 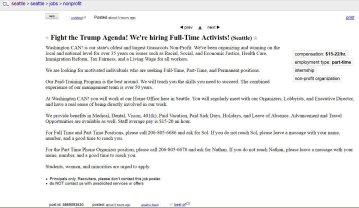 In this video, filmed and published at the WND web site in April 2016, Maile Hampton was filmed in Burlingame, California, at another anti-Trump rally that turned violent, burning the American flag and screaming over a loudspeaker at reporters, “Bourgeois media, get the f–k out!”

http://www.wnd.com/2016/06/rent-a-mobs-targeting-trump-rallies/ [watch the video embedded in this story] 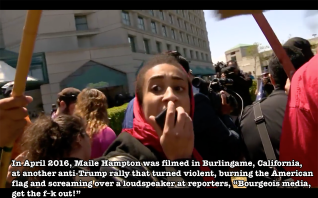 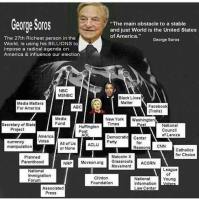 Up until now, we had been seeing such scenes – burning of American flags – mostly in overseas countries, typically by Islamic extremists. Well, now  such disgusting acts are being perpetrated by our domestic terrorists funded by Soros & Co.  Watch how they are also shoving and screaming obscenities and the reporter who was filming this event.

Worse, these “rent-a-mob” thugs are getting away with such animalistic behavior without any police intervention. Which makes the police also complicit in this Neo-Communist American Insurrection.

On Feb 1, 2017, anti-Trump protests at the University of California Berkeley campus also turned violent.  Here’s an excerpt from a CNN report…

“Black-clad protesters wearing masks threw commercial-grade fireworks and rocks at police. Some even hurled Molotov cocktails that ignited fires. They also smashed windows of the student union center on the Berkeley campus where the Yiannopoulos event was to be held.

The violent protesters tore down metal barriers, set fires near the campus bookstore and damaged the construction site of a new dorm. One woman wearing a red Trump hat was pepper sprayed in the face while being interviewed by CNN affiliate KGO. “

Here’s a video report filmed that night. Watch how an innocent bystander gets clubbed and beaten by these thugs.

“THEY ARE FASCISTS,” SAYS YOUNG MAN, AN INNOCENT BYSTANDER WHO WAS BEATEN AT BERKELEY

Asked by cameraman filming this scene, “hey man, why are they attacking you? What did you say to them?”

The young man just shrugs and says, “Nothing. They are fascists. They are Antifa fascists.”

Actually, they were Neo-Communists, members of the Soros Red Brigade. Except that they wore black, like the fascists. Besides, what’s the difference? Fascists, communists… they all used the same violent methods to grab and hold on to power.

Here, you can watch this video for yourself…

Still, the police did not arrest any rioters that night. So back to their complicity. 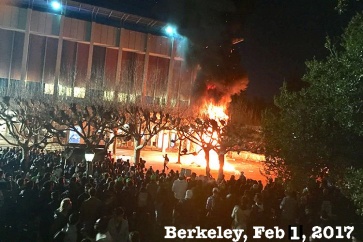 THIS IS HOW RONALD REAGAN DEALT WITH BERKELEY HOOLIGANS IN 1969

By contrast, when similar protests broke out at Berkeley, a notoriously leftist “liberal” university, in May 1969, the aftermath was quite different. Back then, Ronald Regan was the California governor. Reagan would not pussyfoot around his enemies as Trump has been doing so far.

He declared a state of emergency and sent in 2,200 National Guard troops to “use whatever methods they choose” to restore order. And that’s what they did.

Over the next several days, police and troops arrested nearly 1,000 people, including 200 for felonies, while 500 were booked at the local jail.

And now, more trouble is brewing again in the Bay Area, with the politicians and the police again siding with the leftist Neo-Communists, while labeling the patriots trying to exercise free speech as “white supremacists.”

THE NEWS: Following the violence last weekend at a rally in Charlottesville, Virginia, San Francisco’s city, state and federal officials today sent a strong message to organizers of an alt-right rally planned for later this month at Crissy Field.

Breed today joined Mayor Ed Lee and police Chief Bill Scott in sending a letter to the National Park Service expressing “outrage” over its decision to grant a permit to the group “Patriot Prayer” for an Aug. 26 rally. The park service has jurisdiction over Crissy Field, which is part of the Golden Gate National Recreation Area.

ALTZAR COMMENT: So in other words, our “liberal” politicians are trying block free speech in this country on account of possible trouble which the violent Soros-financed Neo-Communist professional thugs are causing. And anybody who disagrees with their views is automatically called a “white supremacist” or a “neo-Nazi.”

And when the violence breaks out, it is also automatically blamed by them and the corrupt lamestream media on peaceful demonstrators who are simply exercising their right to have their voices heard, as guaranteed by the American Constitution.

So if the establishment politicians and the police side with the violent left-wing mobsters, what does that make the politicians?

CRIMINALS, of course. Who should be prosecuted locked up as co-conspirators for aiding and abetting the violent mobs in what is rapidly starting to look like a nationwide American Insurrection by the Neo-Commies.

SIMILARITIES BETWEEN RUSSIA 1917 AND AMERICA 2017 ARE UNMISTAKABLE

In short, history is repeating itself.  What the communist mob did to Russia in 1917, the neo-communist thugs financed by George Soros, another front man of the House of Rothschild, are trying to do in America – carry out an American Neo-Communist Insurrection.

Lenin and Trotzky were smuggled into Russia from abroad on Apr 16, 1917 and May 4, 1917 respectively, and financed by the Rothschilds through Jacob Schiff, a New York banker. Lenin and Trotzky, along with several hundred Jews from New York and Europe who arrived with them, were to raise hell and start a revolution. Which they did. And won.

So why has George Soros not been arrested and charged with treason and sedition under the 18 U.S. Code Chapter 115 – TREASON, SEDITION, AND SUBVERSIVE ACTIVITIES? 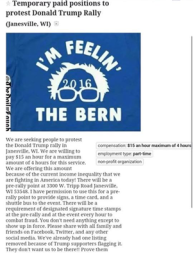 That’s the question the Attorney General Jeff Sessions should be answering. He should be investigating these international criminals, and their domestic terrorists, instead of wasting his department’s resources on chasing the Russian ghosts from the 2016 election.

Here are some of the US Codes under which Soros & Co. could and should be charged:

18 USC : Sec’s: 1961.et seq RICO statutes; 2381 TREASON; 2383 Rebellion or Insurrection; ; 2384 Seditious conspiracy; 2385 Advocating the overthrow of government ; 871 Threat against the President and Successors; 2332b acts of terrorism transcending National Boundaries ; 2339b , A.B.C.D Providing Material Support to terrorists…Note : failure to provide Remedy by the Agent in Charge places hm in liability for 18 USC Sec 4 Misprision of Felony and 18 USC Sec 2382 Misprision of TREASON.

Meanwhile, Trump had better start taking his enemies head on.  Lest he wants to end up like Tsar Nicholas and his family.  God forbid.

The Antifa, BLM and other leftist groups claim to be against fascism yet behave like the Nazi thugs 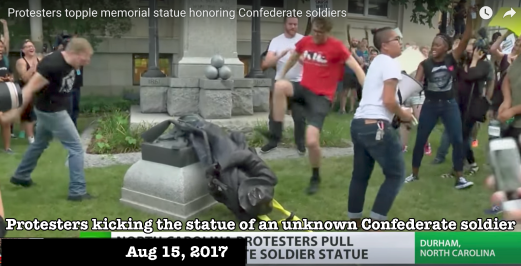 These thugs cheered like sports fans when the statue crashed down to the ground and broke up. And they engaged in a senseless violence against an inanimate object, kicking the sculpture of the unknown Confederate soldier on the ground.

As I watched these images and the video clips from the Durham event, I could not help but think of the book-burning by similar organized Nazi mobs in Germany. They burned 20,000 books on that night. As if that could erase the history and the enlightenment which these books contained.

The date was May 10, 1933. The place – the expansive Bebelplatz square in the heart of Berlin.

Take a look at these images taken today in Durham and in 1933 in Berlin. And then ask yourself…

WHAT IS THIS COUNTRY COMING TO?

Is that the kind of America we want?

If our Founding Fathers were to see this country today, they’d be turning in their graves. For these so-called “leftists” and “liberals” are destroying the very things they fought for during the American Revolution.

So how do we get our country and our freedom back?